UPDATED: Corrected Peter Boghossian’s job title from “Associate” to “Assistant” per PSU records and other grammatical mistakes as well as clarification for minute edits with Dr. Tory Blackwell.

The Clackamas Print did speak with Heather Clark directly in a private message on Facebook. It was not ripped from her Facebook wall. 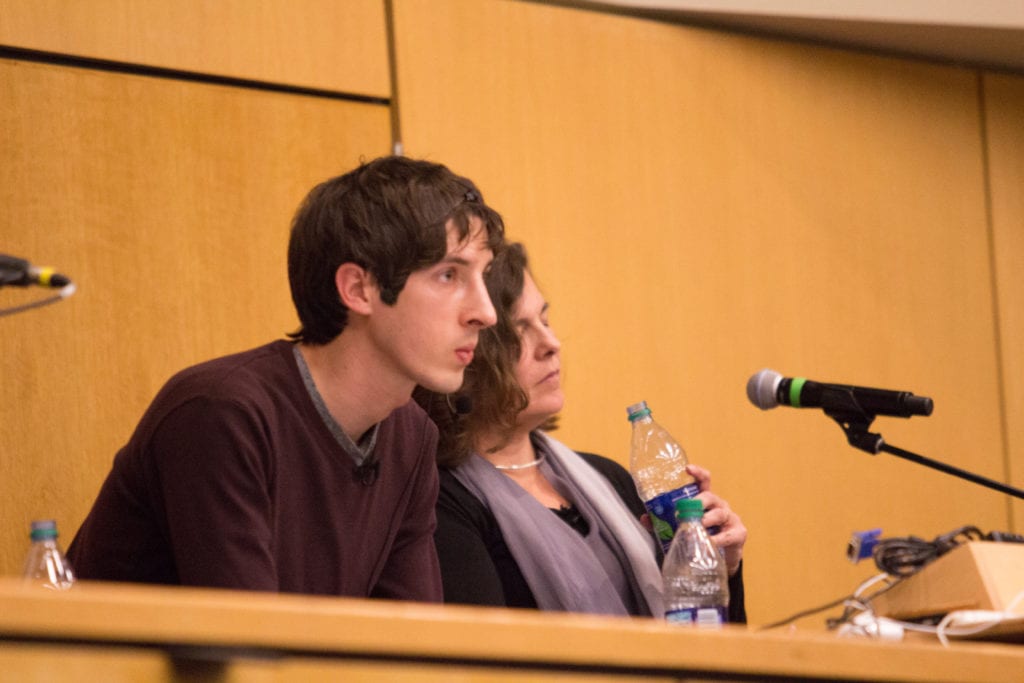 Protesters first retaliated with signage, later staged walkouts and attacked the soundbooth at a diversity talk hosted by the Freethinkers of Portland State University Saturday afternoon.

The protesters attempted to shut down the event in which James Damore was a panelist.

Damore, who is famous for his Google memo entitled “Google’s Ideological Echo Chamber,” hasn’t shied from the public eye after getting fired at Google last August for offering feedback on the company’s diversity program, which had requested feedback from those who attended. In the controversial memo he published, he stated that there are non-sexist reasons for the gender pay gap and expounded on reasons why women on average are not likely to go into the tech field at Google due to biological and psychological  differences between men and women. After getting fired for “perpetuating gender stereotypes,” according to Google, Damore filed a class-action lawsuit against the search engine titan for discrimination. 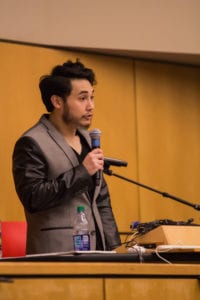 Andy Ngo of Freethinkers of Portland State University speaks to the audience before Doctor Bret Weinstein makes an introduction speech for the panelists. Photo by Autumn Berend.

The event brought in more than 250 attendees.

Prior to the event, Freethinkers of PSU has received threats that host Andy Ngo wrote about in a Wall Street Journal column. 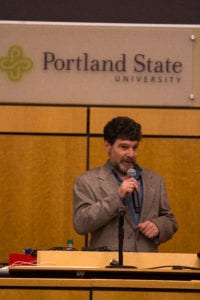 Freethinkers of PSU had to get creative to protect Damore after threats that people should lookout for Damore in order to assault him, said Ngo.

“We found a way to get all of the panelists in through the back entrance of the venue from a green room close by,” said Blake Horner, one of the volunteers for the Freethinkers of PSU. “We closed off all of the blinds to ensure that no one would know that they were inside that room while we were setting up.”

The event opened with Weinstein giving an introduction, advocating strongly and starkly that the people who planned to leave to try to stay and listen with an open mind, referencing his own past of doing the same.

Next, Boghossian read Damore’s memo on biological and psychological differences verbatim and headlines that painted Damore as a sexist with accusations against his character, such as the Willamette Week’s article that accused Damore of claiming women were incapable of doing math or being engineers. After, as the panelists discussed the memo and why it was controversial, Heying made a comparison by asking why people were not offended that men are on average taller than women. This was followed up at 6:30 p.m., only 30 minutes in, protesters staged a walkout. While others walked out, one protester, identified as local protester Heather Clark, attempted to destroy the sound booth by ripping cables and disrupting connectivity. PSU campus police took the protester who caused damage and ripped cords out, aside into the lobby. 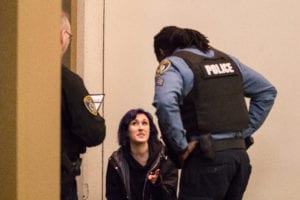 Campus police questioned Clark, before citing her with criminal mischief in the second degree and a two-year ban from campus, according to Clark in a Facebook message. PSU campus police confirmed the citation was correct. Clark is not a student at PSU.

Clark, who goes by Heather Wombat on Facebook, made clear in a public post she basically didn’t regret her actions, stating “Our disruption caused 30 seconds of set back. I’ll take it. Fuck you.”

“I know that some were expecting a violent disruption,” said Clark through a Facebook message. “I don’t think that was ever on the table. Bottom line, people like [Damore] are absolutely not welcome here. We must make that clear. A small walkout and some equipment damage isn’t saying much, but it’s a whole lot louder than nothing.”

“Also, attacking me is no substitute for addressing my arguments.”

Clark’s attempt at damaging the sound system caused only minor damage and disrupted the microphones for a short time before they were fixed.

During the discussion, and later highlighted again during the question and answer segment, Boghossian made clear that Ngo had requested the staff from the Women’s Studies department to join the panel prior to Heying and Pluckrose joining, but they did not attend.

Not everyone agrees with Damore and the comments made in his feedback to Google. Medina Lamkin, Clackamas Community College’s current president of the Science, Technology, Engineering and Mathematics’ club, also known as STEM, is one of them. 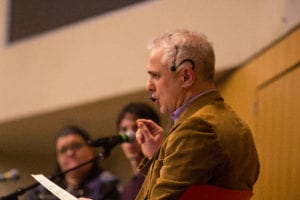 “I strongly disagree with him and what he thinks about women in tech and women in leadership, too,” Lamkin said. She added that she is a female leader of the STEM club, as are two other women, one who is the vice president and the other an administrator. The club also includes  female tech officers. “We support the students here, mostly the STEM students, but we welcome all other students, too.”

“Clearly he is wrong about it,” Lamkin said before she decided not to comment further on the subject.

Lamkin made clear that all students are welcomed to pursue studies in STEM, and the school does not discriminate against anyone based on gender. She said if there is any such discrimination, she’d like to be notified right away.

Damore, a University of Illinois at Urbana-Champaign graduate with a bachelor of science in molecular biology, physics and chemistry and a master of science in systems biology from Harvard, said he has done extensive research on the topic before writing about it.

“I’ve read significantly into this subject and was getting a science Ph.D before joining Google,” said Damore in a direct message on Twitter. “Also, attacking me is no substitute for addressing my arguments.”

Critics of Damore have charged him as being sexist and misogynistic for the claims made in the memo itself. 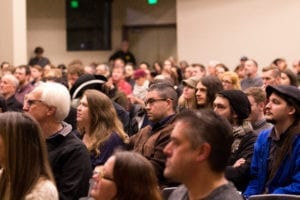 Dr. Tory Blackwell, biology instructor at Clackamas Community College with a Ph.D in molecular and cellular biology, said that there is some truth to Damore’s statements about biological differences, however, he does not believe they are sufficient to block women from STEM careers.

He said that these chromosomes affect changes in hormone. For example, the Y-chromosome in the genes produces much more testosterone. And there are biological differences to account for in height, muscle and even bone structure.

“Those are universal, but the thing is they come in a range,” Blackwell said. “So, when people talk about differences in hormone level, well, everybody has a range amount of each hormone, testosterone, estrogen, that they’re producing. So, you don’t see every man on the planet as a weightlifter or ever women is super feminized. There’s a range.”

Blackwell said when he was in the U.S. Army, he had witnessed female soldiers as fast and as strong as the male soldier, the testosterone levels in them might’ve been similar between them. Differences are common in animals.

Blackwell confirmed that genes are hereditary, but the factor that’s often left out is the environmental component.

Do these biological differences help influence choices, such as what field of study one pursues?

“You do have differences in genetics that lead to differences in hormones that impact human behavior,” Blackwell said. “But, how huge of a role those play is really something we’re trying to understand. One, because it requires a lot of research. It would require taking or preventing or over generating hormones in humans, and that’s not really ethical, so we have to rely on other things naturally.”

“The subject is complicated and easy to misrepresent,” Damore said in a direct message on Twitter. “It’s hard to summarize a 10-page document written for engineers without missing out on the nuance.”

Dr. Ivan Mancinelli-Franconi, psychology instructor at CCC, stated in an email that women on average are more prone to anxiety, a psychological response, due to biological causes, like hormones. Mancinelli-Franconi added that people’s biases color everything they do. Men are generally more career driven and women are more attuned to their feelings and aesthetics, which strengthens Damore’s comment that it may “explain why women relatively prefer jobs in social or​ artistic areas.”

Despite critics response, scientific evidence supports some of the claims made in the memo regarding biological and psychological differences in men and women.