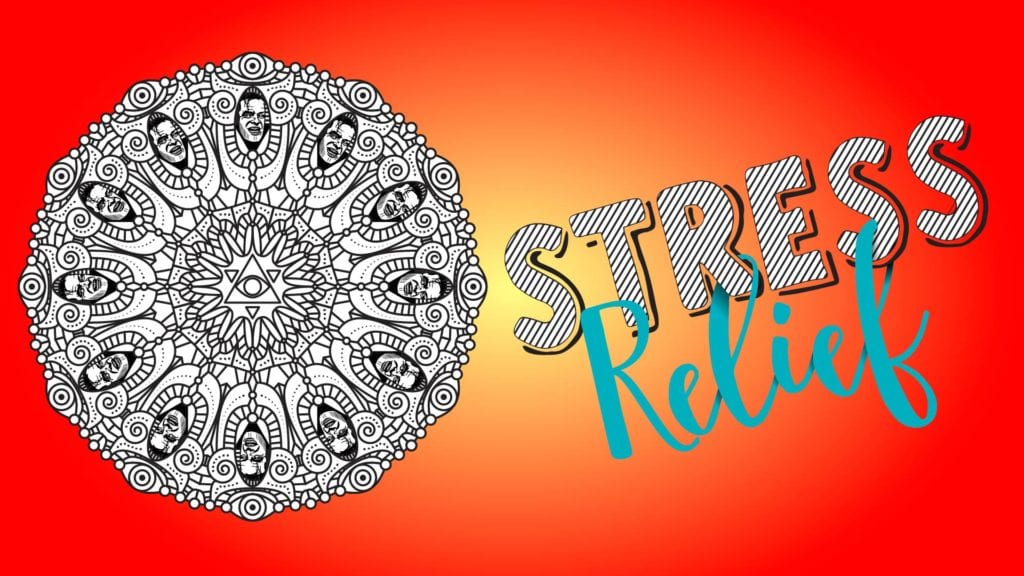 Because of work, school, traffic and other worries, you may be feeling stressed. Add midterms to that pile of stressors, and you might fall over. Here are 10 ways to narrowly avoid the falling part.

Get out the colored pencils

Or markers, crayons, pastels? Coloring and drawing aren’t just for kids. Calle Pierson, a counseling intern at Clackamas Community College, suggested drawing a picture of a body (non-artists, fear not, a stick figure will suffice) and marking the spot where you experience tension.

If that’s too involved for you, just draw or color.

Slime is trending. Heaps of social media accounts exist solely for posting slime videos, and they’re not hurting for viewers. On Instagram, 1 million people have opted to clog up their feed with quiet videos by @satisfyingvideo of manicured hands handling slime of varying textures.

Why so satisfying? It might be a phenomenon known as Autonomous Sensory Meridian Response, where people experience tingling sensations down their scalp and neck along with feelings of relaxation as a result of visual or audio stimulation.

“I find these ASMR videos quite relaxing because of the very little noise they produce,” said Piper Doan in an instant message, who is the owner of @slimeinternet, an Instagram account with more than 35,000 followers.

One YouTuber, who has more than 800,000 followers on her channel Gentle Whispering ASMR, posts videos of herself whispering and performing slow motions such as tapping. In an interview with “The Washington Post,” Maria, the Gentle Whisperer herself, described the experience.

“It’s like showers of sparkles,” Maria said. “It’s like warm sand being poured all over you, trickling over your head and down into your shoulders. It’s like goosebumps on your brain.”

You might think this would lead you closer to insanity than to sanity, but according to the experts, you would be wrong.

“I’m a big advocate of self-compassion,” Pierson said, “so speaking to yourself the way that you’d speak to a close friend or a pet. Most people would not look at their dog and be like, ‘You’re so stupid and horrible,’ right? That’s abusive. And you might find yourself when you’re stressed out saying, ‘Why didn’t I do this? This was so dumb.’ Take a minute to be like, ‘Okay, I messed up. But now I need to move forward and that’s okay.’”

It doesn’t have to be intense or time-consuming. Find what works for you. Going for a run or a walk can amount to miles of head-clearing, or shooting hoops or dancing. Clackamas student Jacob Dunn likes to go out and skate.

“I know adding it to people’s schedules might be a little hard, especially around midterm,” Pierson said. But most people can squeeze out a half-hour that might otherwise be wasted.

When it comes to tests, homework and scheduling, gather your to-dos ahead of time.

“Preplanning is huge in terms of coping with stress,” Pierson said. She recommended using Microsoft OneNote or Google Calendar.

If you commute to the college, prep a list of tunes and utilize that time to decompress. When you’re studying, white noise apps can be both relaxing and helpful in drowning out outside noise.

If all that fails, just turn on Lady Gaga, which will help you forget your worries and transport you to the halftime performance of the century.

Lean on friends and family

When you’re drowning in an ocean of stress, your social network could be a lifeboat. But cling to the ones who have a calming effect on you, not those who rile you up.

Student Bailey Dunn likes to engage his friends in an unconventional way, which just might provide comedic relief for everyone involved.

“To relieve stress I like to mess with my friends, like do pranks, not really rude pranks, but just pranks,” Dunn said.

If your stress or anxiety becomes unmanageable, counselors are available on campus. For information and appointments, students can visit ulifeline.org/clackamas online, call 503-594-3176 or drop by their office, located in the Community Center.