A geeky pillar in the community 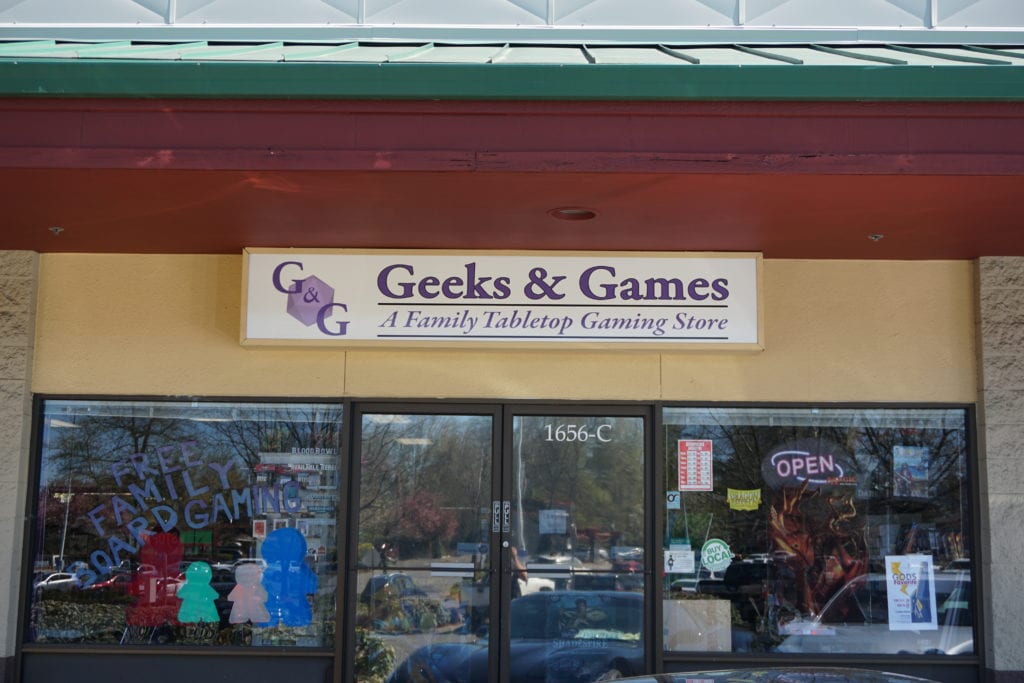 Whether it’s slaying dragons, crowded around a table littered with paper and pencil, painting armies of miniature figures that may perish in battle, or just relaxing after a long day of work with a board game or two, Geeks and Games has you covered and then some. Arriving in October of last year, Geeks and Games has become a haven for gamers, painters and families alike to come together and support the spot that provides the community with a place to unwind.

Adam and La Donna Cox are the proprietors of Geeks and Games, and the ones who took the chance to bring the store to life. “I’ve always been a hobbyist and enjoyed games,” Adam Cox said. “I’ve been gaming a lot recently within the last five to ten years and when La Donna deployed overseas, I had really nothing to do so I started hanging out at a game store and my mind started wandering, When she came back from overseas, we started talking about it and at first she thought I was crazy. She was probably right, but she started looking at what we could do in the community because it’s really important for us to be supportive of the community and of our employees and those are two things we saw deficient in employers that we’ve been with before.”

Since the start of the Geeks and Games, Adam and La Donna Cox have gone to great lengths to involve themselves in the community that revolves around both them and their store. They are active participants in the local Chamber of Commerce as well as the Oregon City Women’s Club.

Such commitment to learning the dynamics of being a family-run business has offered many opportunities for them, and it’s drawn students here at Clackamas Community College through their doors as well. “Just prior to opening, we were at the college trying to promote the opening of our store,” La Donna Cox said. “We had a tent out and some games for sale and we were talking to a lot of people and we met a lot of people at the college and then a month and a half later we got keys to our building and we kind of stood there the doors were open and it was completely empty in here and then a whole bunch of kids from the college showed up and said “We hear you’re ready to move in, can we help?” Then we had all of these college kids that worked hard and brought in all of our fixtures and furnishings that we had already purchased and just started moving things in and helping us get settled in, and completely unexpected.”

Nathan Ray, one of the CCC students that assisted the owners with moving into the building, has made Geeks and Games his go-to spot for games such as Magic the Gathering and Warhammer. Before the coming of this game shop, Nathan would often pass up opportunities to game with others for the sole reason of inconvenience, as driving to and from Portland to play at the larger game shops can be a drag. Ray regularly attends events that the store holds and continues to support the store and their various ventures.

According to Ray, Geeks and Games has given many of the gamers in the area a place to let loose. “I think they’ve reacted positively to this place, and we’ve never had a place like this in Oregon City so people really enjoy having this place,” Ray said. “It has a nice family friendly environment.”

While gaming is their forte, Geeks and Games doesn’t restrict their creative boundaries when it comes to other hobbies. Paint Night is a favorite amongst the community, and it’s attracted the attention of other artists in the area who are looking for a place display their art. Oregon City High School’s Art Club is currently displaying their art in the store until the end of the month. “I was really excited when the high school contacted me and said that their kids had been asking if they could have their artwork displayed here for their annual artwork show,” La Donna Cox said. “I said absolutely, I’ve got to take down some pictures but you can have the entire wall, it’s all yours.So far it’s been very successful, we’ve had a lot of kids come in that are excited to see their stuff on the wall and of course their family members. I would love to have them back every year.”

Geeks and Games supports all walks of life and show no sign of turning their back on those that seek to socialize, game, and express themselves; they also show no sign of slowing down when it comes to the variety of activities they offer. Juggling an average of a dozen different events a week along with plans to expand the size of their store, Geeks and Games looks like it’s here to stay. According to the positive feedback from the community, Oregon City is glad to have them.