A night at the museum

You’re in college, admit it: you’re excited that on Oct. 1 you’re going to walk into a dispensary in Portland and purchase marijuana. And after? There’s no need to stay home staring at the television like the stoners of yore. You’re a metropolitan living in America’s most progressive state! Seize the day/night and make a hazy memory. Perhaps you’re thinking to make school more hazy thanks to Measure 91. That would be a mistake. Clackamas Community College has banned the use of marijuana on campus.

Think elsewhere; think back. You recall your dad telling you once that he used to smoke pot and go to OMSI’s Pink Floyd laser light show. And so the journey begins.

I boarded the Orange line to OMSI from Milwaukie and disembarked at Tilikum Crossing. As I approached OMSI I found a beautiful irony in the massive red smoke- stack over the Kendall planetarium.

As my photographer accomplice and I claimed our tickets and got in line, I checked my watch and the paranoia kicked in. Photographer Andrew said “Remember these thoughts; they’ll make for a good story.” As he was speaking, a middle-aged woman’s voice popped into my head, muttering “It just makes him skittish and dilates his pupils…” I stared deep into the abyss for a moment as her voice turned to faith. I didn’t understand much, but I did hear a hellfire and damnation sermon tell me to repent of sin. Nothing unusual so far.

I entered the planetarium. The room was cool and foggy and blue. The ceiling, perfectly circular, rings in the material. An iris, a pupil. Was this cool blue room the eye of a god?

The MC broke my train of thought with his joyous baritone. He invited us to “hoot, holler and dance in our chairs” to the music because silence during laser lights “is just creepy.”

The show began and colors danced. I didn’t know the first three songs. They were late Pink Floyd, after tension had eroded their creativity. Still, the laser show was inspired. As “Keep Talking” morphed into “One Slip,” a timer appeared with a “DISARM” message. It counted down from thirty as invisible hands entered passwords trying to abort disaster. The hands failed and the explosion of light into “One Slip” was fantastic.

“Any Colour You Like” came in, the first of the “Dark Side of the Moon” cuts. I was happy to see the laser choreography was different from OMSI’s old “Dark Side” laser show. I saw Pink Floyd laser lights twice before they switched to “The Vision Bell.” The new pun-fully named show included cuts from “The Division Bell,” “Dark Side,” “Animals,” “Wish You Were Here” and “The Wall.” The lasers complemented the mu- sic well. “Have a Cigar” played to the campiness of seeing laser lights with its goofy pig characters. Its miniature plot saw a pig abducted by an evil scientist and experimented upon. He becomes a “Superpig” (with cape and all) after the experimentation, who then escapes from the castle and flies through hordes of pig-bats and pig artillery to freedom.

I stayed through the massive hit from “The Wall,” Pink Floyd’s “Another Brick in the Wall (Pt. 2).” Above us, a terrifying teacher beat a child with a paddle. As I left my seat to catch my train, an old man screamed at me: “How can you have any pudding if you don’t eat your meat! Stand still laddie!” I huriedley exited the dome escaping from his beckoning and emerged outside.

After Oct. 1, you’re probably going to indulge in a green way. It’s legal so you might as well enjoy it. Don’t bring it to school, it’ll be a downer. Find something awesome and make a memory in a positive way. OMSI laser lights are a great activity for the psychedelic minded. 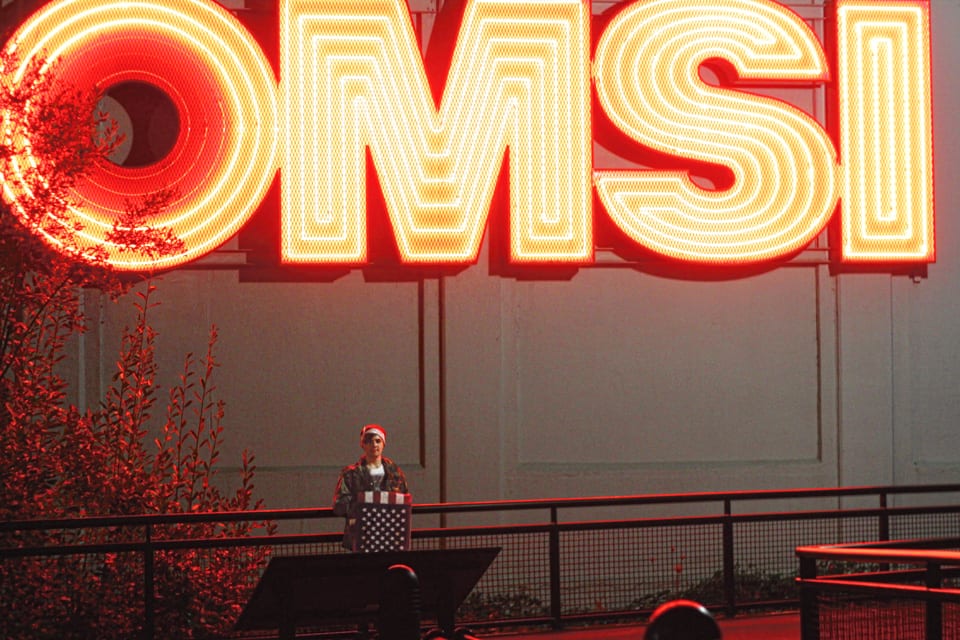