After 10 years The 69 Eyes return to Portland 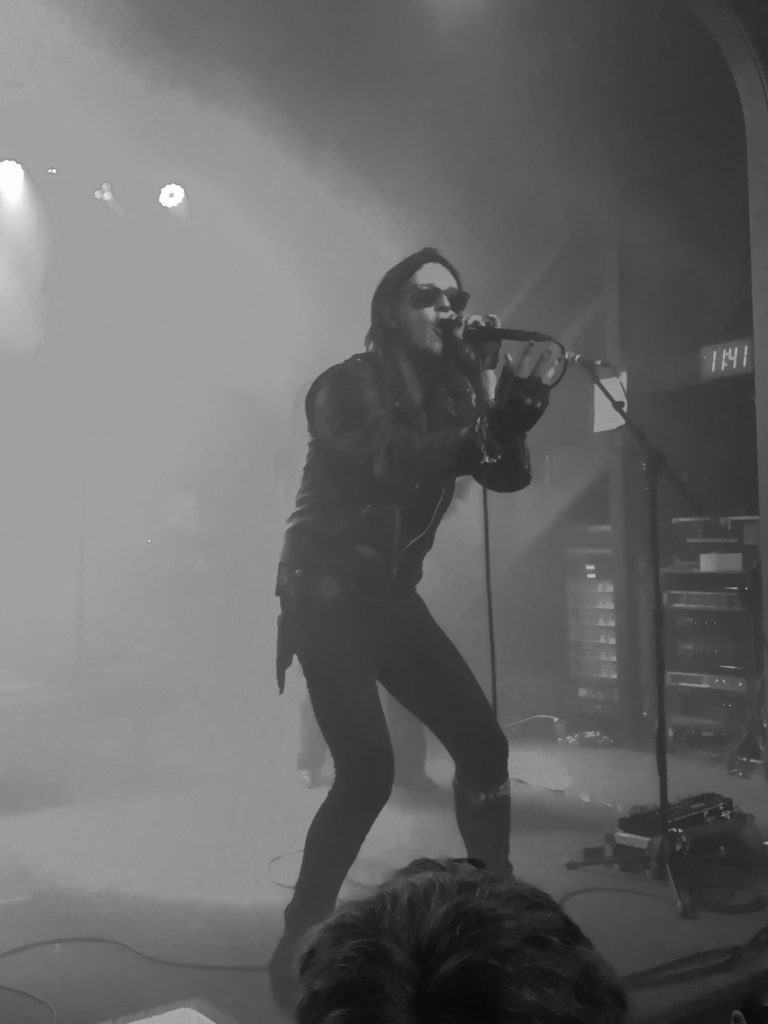 Black leather and metal glinted in the sun as we circled the venue a fourth time looking for parking; the modest line leaned against the brick facade of the building and some stepped aside to smoke – this show was one we had all waited 10 years to see. “Did I leave my cheese stick in the car?” I asked myself as I speed-walked into the breeze toward the Hawthorne.

Taking our place in line, I settled in and listened to a slender, long-haired man and the petite woman in front of me chat about the concert and about his friend who had purchased the meet and greet package. A sweet couple stood behind me, chatting quietly and cuddling – they, and roughly half of the total audience – were old enough to be my parents. Twenty five minutes past the “doors open” time printed on my ticket, the line started moving. Inside I stepped through security to get wanded, where I was informed I had something in my pocket they needed to look at – I fished around, pulling out the offender – my cheese stick. Chuckling to myself, I put it back into my pocket and filtered through the dark hall into the theater. People already pressed up against the barrier at the front of the room to stake their place in the front row and the show wasn’t beginning for another hour.

Milling around, we waited for what felt like ages as the room filled up. Finally the clock hit 8: 30 and the show started. Opening up the night, we first watched a local band by the name Die Robot – I noted that they weren’t officially a part of the tour I’d come to see. Though their music is classified as Techno online, the heavy handedness of Screamo- style vocals left me with more of a knockoff, new-age Green Day kind of vibe. I felt bad as I rocked on my heels and listened to their set – I noted a guy headbanging heavily to their songs while everyone chatted and half-listened. I later overheard the headbanger talking to another girl in our area, “Everyone is hyped for The 69 Eyes, so the underdog bands are getting underlooked.” The lady he spoke to agreed politely. She wasn’t into it either.

Even though the audience didn’t reciprocate the energy, the singer and guitarist stayed hyped and had fun with his set and looked like they were having fun. Their bassist, on the other hand, took another path with her attitude. Cool aloofness seemed to be the goal, while she fell far short of that, coming off as disinterested and distracted. Die Robot cleaned up their set and removed their gear so that the second act could get their gear onstage. The Nocturnal Affair enlivened the theater. The classic long- haired metalhead style of three of the five bandmates was enough for the crowd to become interested – nevermind the fact that they opened up their first song with some heavy technically interesting guitar and amazing synchronized windmill headbanging. The whole set continued this way and by the end everyone was intent on the stage, anticipating the arrival of the headliners. Antsy, I looked around the room, listening to others around me. One more performance until The 69 Eyes were to go on. I kept fiddling with the warm cheese stick in my pocket. The waiting killed me. Smoke machines cranked up so high we couldn’t see more than eight feet in front of us, a pretty blonde entered the stage with her one other band mate. MXMS performed something like six songs and I sat on the floor to escape the smoke. The girl next to me joined me on the floor and we bobbed along with the Indie-esque band, who describe themselves as “Funeral Pop” on Facebook. She wasn’t bad and I even sang along when she encouraged us to join her in a rendition of “Something in the Way” by Nirvana. I’m the first to pitch a fit when anyone covers a song, let alone a Nirvana song, (a band for which I have a tattoo,) but I appreciated the way she emphasized different parts of the song than Kurt did, and she further slowed down the already very somber melody.

Back on my feet I waited on baited breath as the crew set up the stage for them: the band we’d all been waiting to see. The band that hadn’t toured the U. S. in 10 years. It was 10 : 30 and I was in anguish. Hot, crowded and thirsty, I just wanted to see The 69 Eyes. In front of me was a father and his son, there for his son’s first concert, The 69 Eyes are his second favorite band. Before the set began they allowed me to shoulder between them to read the set list that the roadies had taped to the floor directly in front of us. Right then and there I could have died. My heart nearly burst as I read line The 69 Eyes were right behind the curtains in front of me, and were planning to play every single song I hoped they would.

Slowly the band filtered on stage. Everyone crowded closer and I abandoned my leather jacket, already dripping sweat from the heat of the lights and the closeness of everyone. Packed shoulder to shoulder and ready to party, finally, through the smoke The 69 Eyes kicked their show off with “Devils” from their 2004 album of the same name. The crowd came alive and I couldn’t think or hear as the bass and lyrics rumbled in my chest along with my own screams.

Song after song I remained in awe of the quality performance they put on. Not a Goth Rock band, not a Goth band, and not simply a Rock band, The 69 Eyes describe themselves as a “Goth ‘n Roll” band, with a rock sound, and heavy gothic themes to their work and aesthetic; The 69 Eyes put on an electric performance and the crowd ate up song after song, shouting their love for them between tracks and transitions. Their stage and lighting wasn’t fancy and they didn’t employ costume changes or special effects at all. All there was was music and it was refreshing.

Lead singer Jyrki 69 and his bandmates find inspiration in classic rock bands, and they’ve often been compared to the legendary band HIM. Very apparent is the love that Jyrki 69 has for Elvis, he himself employing a muted gothic- Elvis style wardrobe and dancing which brought the performance to another level. Women

jeered for Jyrki’s hip shaking and dancing as women did for Elvis in the 1960s and ‘70s. He’s also developed a very Elvis-esque lip curl when singing. Performing their popular single “Perfect Skin,” Jyrki 69 sang the chorus “You can’t keep me waiting forever, baby/ It’s getting hot/ Who’s going to rescue me?” unzipping his leather jacket bit by bit and from the crowd, even above the bass, you could distinctly hear the ladies’ voices explode. He might be 50 this year, but Jyrki 69 still looks as good as he did in the videos his fans know and love from the early 2000’s.

Making their way down the 18-song set list, the crowd only kept getting louder, shouting lyrics back to them and clapping along to the beat. At song 15 the band walked off, waving, leaving the rest of the crowd (who hadn’t read the set list,) begging for more – they still hadn’t played their most popular song. A roadie came on stage, amping us up and encouraging us to shout for the band’s return. Shout we did. And stomp. And jump.

The 69 Eyes returned for the final three songs of the evening and the crowd, already bursting at the seams, came completely undone. Dancing, laughing, screaming and singing, the crowd devoured the last leg of the set and finally, the one song we all waited for began. The beginning of the end, “Lost Boys” ignited a new fire in us all. People pushed forward one last time and those of us up front reached toward the stage, trying our hardest to cling to the last few notes.

Just like that, it was all over. The lights went up. The band left after giving us their love and we all stood still for a fraction of a second as the lights came up. We were dazed, deaf, sweating violently and we were happy.

Filing out of the venue, tired, disheveled goths poured from the doors and onto the sidewalk for their Ubers and rides. Many concert-goers leaned on the bricks outside, removing the platform boots and heels they’d donned earlier, and hobbled down the streets to their cars barefoot. I walked up the sidewalk through the cool breeze and felt like I was underwater, unable to even hear myself speak. The ringing in my ears sang a pitch that I can only imagine is what dogs hear when humans blow dog whistles, my chest continued to vibrate as my heart thudded at an unnatural speed.

Hopping in the car I brushed my feet off and put on the comfy shoes I’d left in the trunk. Closing the door to the night and getting ready to go home, I reached my hand in my pocket for my phone – once again I found the now-squishy cheese stick and I was glad. Exhausted, elated and starving I gladly ate it and took off toward home as The 69 Eyes left for Sacramento.

Nothing beat the bittersweetness in my mouth as I drove, knowing that I’d just seen the best show of my life and not knowing when the “Helsinki Vampires” would be back in the United States again.