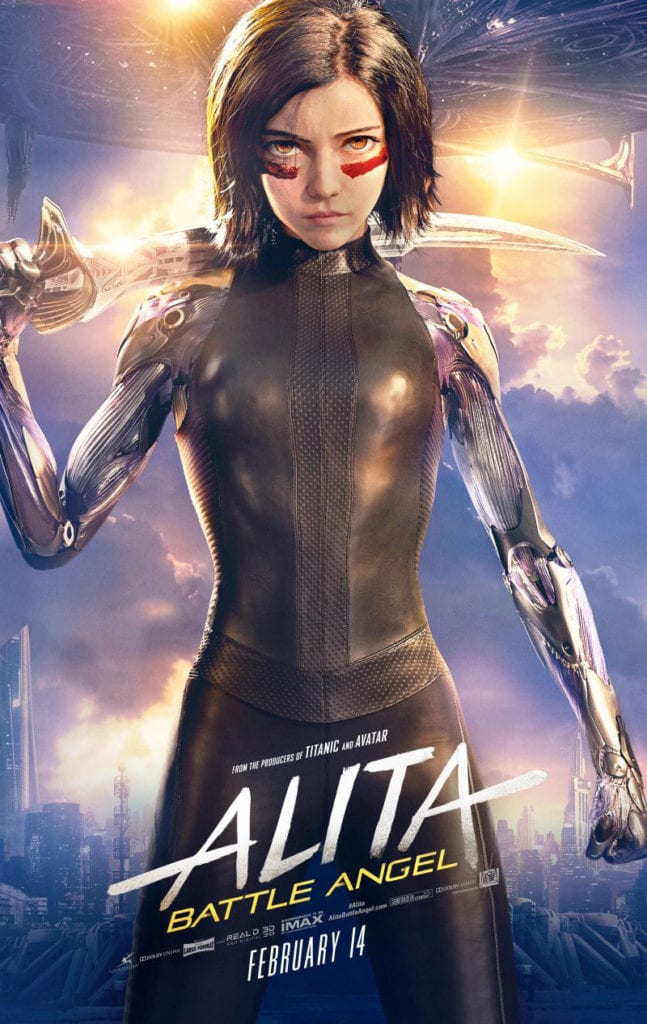 “Alita” is a movie I went into with skepticism. I’ve never read any of the original books or seen the anime so all I had to go on was the trailers. The film looked like an interesting action adventure with plenty of unique designs but I honestly didn’t know if it would be any good. My skepticism was immediately blown away when I saw the movie.

“Alita: Battle Angel” is a fast-paced action packed spectacle that’s as exhilarating to watch as it is beautiful to behold. The film focuses on a future earth, reconstructed after a great war called the fall destroyed most of society. The last floating city rebuilds with a slum underneath it, producing all the supplies needed to keep the rich happy while the poor suffer below.

In these slums a doctor of robotics looks for parts in a junkyard and comes across a mysterious cyborg girl clinging to life. He fixes her body and helps her recover but she wakes up to find she has no memories. The rest of the film is focused on this girl, now called Alita, as she discovers more about herself and the strange world around her, all the while cruel and powerful forces seek to find her.

While all that may seem like a standard set up for a sci-fi movie, “Alita” is anything but standard. From the unique rugged look to all the technology to all the creative cyborgs and prosthetics the film is filled with style, with plenty of amazing looking effects and intricate detail on every surface.

In fact that would probably be my favorite thing about the movie, its aesthetic. From the beautiful, clean look of the floating city to the little flourishes on Alita’s arm decals, it’s filled to the brim with imaginative designs for every inch of this world.

The pacing is also fantastic. It starts out fast in the beginning and keeps the momentum going until the end. But it still takes moments to slow down and let moments linger on gorgeous shots that look like they were ripped straight out of the graphic novels, again letting those amazing designs and imagery be seen in all their beauty.

That pacing does lead to the movie being pretty dense, however. They pack a lot of story into it and it can all go by really quick if you’re not paying attention. But I feel they balanced it just right so you can follow the story and still feel all the emotions and connections your suppose to get out of the characters.

This also leads to the film having an atypical structure that does not follow the conventional three act structure we usually see in American movies. It doesn’t so much have a beginning middle and end as it’s more broken into five or so continuous sections that show you a bit more of the story and continues on without a clear break.

For some people that could be a turn off but I personally enjoyed it. I think it’s great to see a movie with a different structure, and one that fits with the high energy story they’re trying to tell.

This movie makes me excited for any future “Alita” movies that may come out and interested to read the original series. So whether you’re an old fan or are just looking for something new and exciting to watch, “Alita: Battle Angel” has something for everyone.

After nearly 20 years in the making, James Cameron’s adaption of “Battle Angel Alita” has arrived. Based on the Japanese manga “Gunm,” “Alita: Battle Angel” follows Alita, a cyborg rescued and revived by a doctor in the post-apocalyptic, dystopian world of the former United States in the 26th century.

Cameron was first introduced to the franchise by writer and director Guillermo Del Toro. An instant fan of the manga, Cameron drew from “Alita” when developing the television show “Dark Angel” in 2000. It was around then that he first expressed interest in developing a big budget film based on the series but did not believe he had the technology to properly translate the series to the silver screen.

Finally, in 2016, the film was scheduled for release. After recruiting Robert Rodriguez to direct, production was launched.

Cameron’s love for the source material is apparent from the first moments of the film, from the introduction of Daisuke Ido (renamed Dyson Ido in the film), the cyber-physician that finds Alita in a scrap heap, to the character of Alita herself. From its protagonist to the several villains that appear throughout the film, “Alita” manages to create a vibrant, if eccentric world, something many other post-apocalyptic films have failed to do.

The movie truly shines during its action sequences, utilizing the talents of both its director, responsible for movies such as “From Dusk Till Dawn,” “Sin City” and “Grindhouse: Planet Terror,” and the science-fiction chops of Cameron himself to create a sensation found in few other modern films. Rodriguez’s penchant for the over-the-top action is especially apparent, while Cameron’s more polished hand can be seen quietly guiding behind the scenes.

Some fans of the manga may note that the story is significantly sped up compared to that of the manga, but the change is a good one. Though some of the original story has been removed for the sake of the run time, the decision seems to have been the right one, allowing the film to adopt the proper pacing for the medium.

Of course, the film is not able to cover the entirety of Alita’s story and does end on a cliffhanger, though there is a definitive ending to the film’s conflict. It is clear that Cameron intended the film to launch a series, perhaps spanning the entirety of the source material, though the series future is currently in jeopardy due to a less than impressive opening weekend.

Grossing only $130 million over its opening weekend, the film seems unlikely to break even. Especially with the surprise reveal of another character (or actor, more accurately) near the end of the movie, this is a shame as a sequel is unlikely to be produced without proper financial gain.

Even without the possibility of a sequel, however, “Alita: Battle Angel” still stands as one of the best science-fiction films released in recent memory, far surpassing the recent “Star Wars” films or last year’s “Ready Player One.”