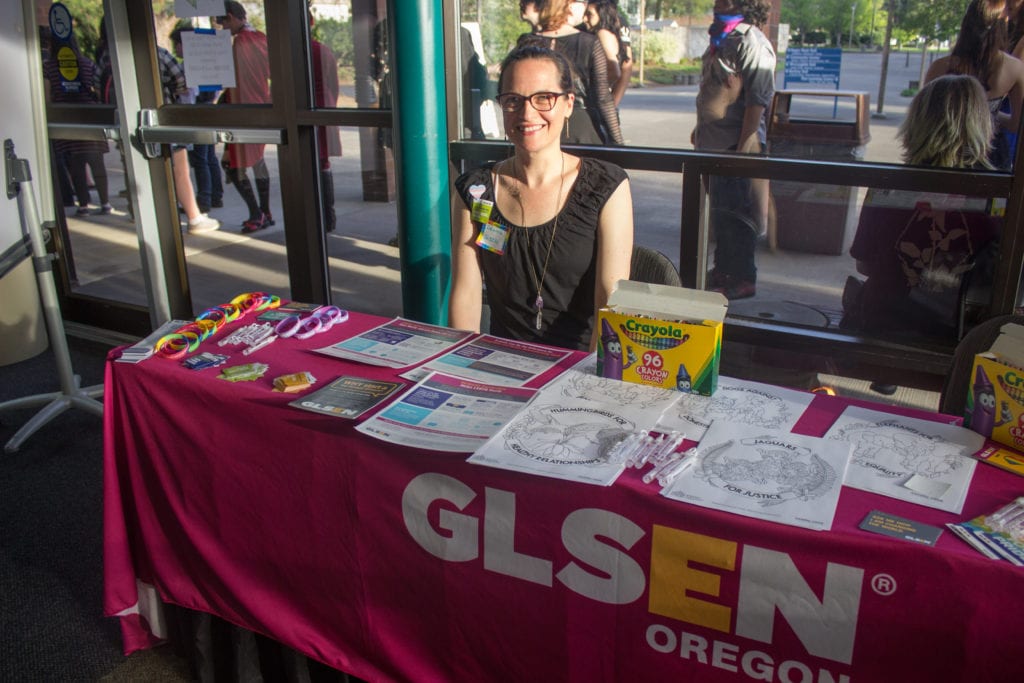 Teens and young adults showed pride at Alternative Prom: MasQUEERade, an event hosted on Oregon City Clackamas Community College Campus on Saturday, May 4. Alternative Prom is a free event hosted for teens 14-20 whose sexuality or gender may make it difficult go to prom in their own schools. Alt. Prom started as a small gathering of only 20 teens grew into a massive celebration involving roughly 300 guests. The event included a DJ, and hosted a bunch of organizations to help support the LGBTQ+ youth.

“The reason I decided to create this [Alt. Prom] event, was because when my daughter came out in Clackamas County, there were no resources out here at all,” said Carolyn Russel, who helped found Alt. Prom and The Living Room, a space designed to be a safe haven for LGBTQ+ youth in Clackamas County. “R.E Szego, the other co-founder and I, went to a Clackamas County meeting for services for youth, and they were talking about all the great stuff that they were doing, but there was absolutely no mention of any services whatsoever for queer youth, and so we raised our hand and R.E. said, ‘What about resources for gay, bi and trans. kids?’ and they responded, ‘Oh, we don’t really think there are that many out here.’” They were in shock at the community members response.

“That was actually how The Living Room came to be, the prom came out of Clackamas County PFLAG, which I had already started with another person, we threw the little prom at a church in Oregon City, and a bunch of kids came. We were like, we were onto something, there was a need for something to happen in the Clackamas County. The Alt. Prom is what initially started The Living Room. There was like 20-25 kids that showed up the first year, and then there was like 100 kids, and then we started The Living Room, and then we started it here because we ran out of space,” Russel said.

Aryn Zanca, program coordinator for The Living Room expressed their love for Alt. Prom. “I think that Alt. Prom is awesome, I love prom.” Zanca explained. “It’s one of our biggest events of the year and it’s always great to see everybody and helping each other have a great time,” they said. “I do feel like we are growing. I feel like we might have to start thinking about space and stuff like that. I feel like we are always working through little hiccups around things like that, like figuring out the photography and stuff. We try our best but there is always stuff that’s like, ‘oh no, it’s not working because you can’t see the bracelets in the dark!’ And things like that. I think there are always little things we can do to improve upon.”

CCC’s Gay Straight Alliance Member Izzy/Andreas expresses their gratitude towards Alt. Prom. “I am part of the CCC Gender Sexuality Alliance, which helps promote the event and I also heard about it through The Living Room as well. I don’t remember which one came first though.” said Izzy/Andreas. “I absolutely love Alt. Prom. The only issue I have is so far, every song I have requested played while I was out here on the shift instead of being on the dance floor. But it’s whatever, I am having a good time otherwise.”

Alternative Prom is a yearly event and for more events, check out thelivingroomyouth.org for more information and for more ways to get involved.