Hail, snow, rain, wind and paintballs all in a day’s work for Splat Action Paintball in Molalla. Brisk 70-degree weather filled the air Easter morning. Quite the drive, windy back roads until you turn out into an open parking lot filled with two rows for cars on a gravel lot, there must have been roughly 40 people present. 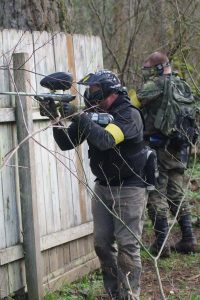 We found a spot in the back, and raced up to the counter to stand in line for about 35 minutes. At the counter, people of all ages were checking out paintball guns, the youngest that turned out to be eight years old. Finally, after each  paying $55 for the paintballs and gear we made our way down to the field.

Down in the forest the two referees split everyone into groups. We walked to the separate sides of this forest, filled with overturned logs and fox holes, tree forts and wooden planks. The referee blew his whistle, and everyone took off running to the center of the forest.

My teammate Max was the first into the thicket, after the rest of us prudently meandered our way to the center of the field, he came bounding back through the brush, paintballs whizzing over his head shouting “They are flanking from that way!” I tossed myself behind a tree just in time to hear it crack with paintballs. Not long after I got hit in the leg and was taken out for the round.

After a few rounds in the forest, we all made our way back to the cars to refill on paintballs and compressed air. We grabbed bags of paintballs from the trucks and compressed air from the booths before they called the next round. I spent an entire game tucked in a fox hole with three other kids, watching guys slowly begin to surround, as they darted from one bush, to the next, some narrowly avoiding our paintballs, others getting drenched in them.

It quickly became lunchtime. Kids ran into a vacant forest and shot at each other during the lunch break. All too quickly we were back into a new part of the woods, getting rattled with paintballs.

Splat Action paintball on Easter is not like any paintball played before. It was packed with players, had over 6 different fields to play in, and had an overall good ambiance. If I could recommend a single way to celebrate Easter or any other day, it would be spending it at SPLAT ACTION – Portland’s Largest Outdoor Paintball Park since 1986 | Splat Action.

Quinton Paul started with The Clackamas Print in fall 2021 and is studying psychology at CCC. Born in Portland, Oregon, Quinton enjoys snowboarding and reading in his free time. His favorite genre is fiction.