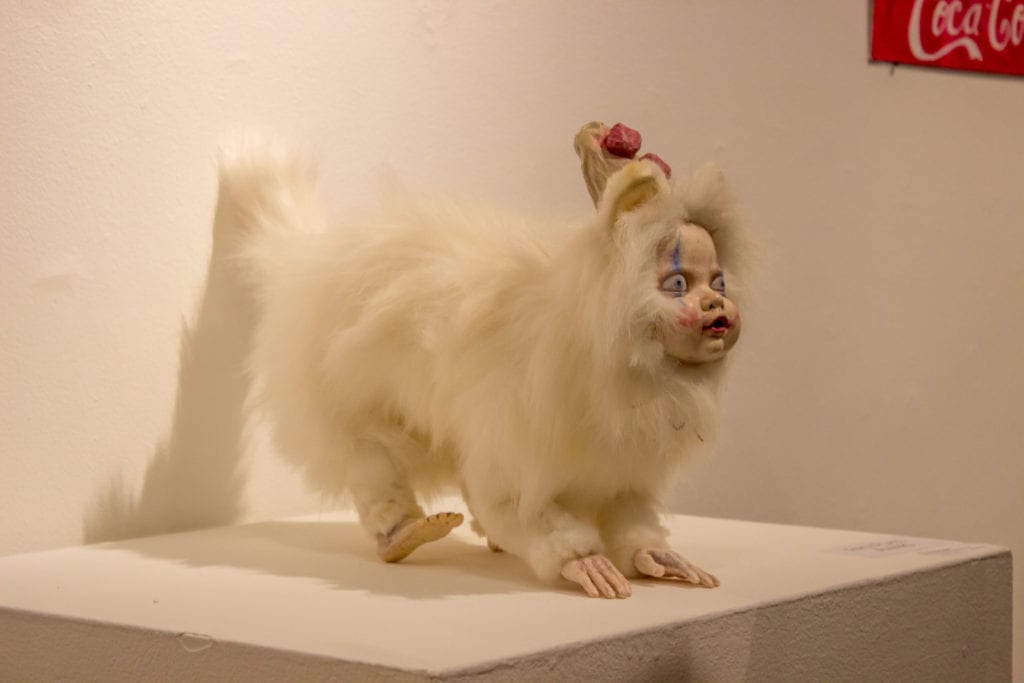 The Annual Clackamas Community College Student Art Show began at noon, May 14 with students bustling around the entrance, enjoying free refreshments while waiting for the show to begin. Once the event started, the winners were announced and the attendees hustled into the Alexander Gallery to behold their peers’ hard work on display.

This year’s art show was very sculpture-heavy; faculty member Catherine Dreer described it as “Everything is monumental, it’s huge.”

Steven Mysinger’s life sized, “21st Trojan Horse” earned him an area award for sculpture. This larger than life sculpture was crafted from two-by-fours and paper mache. Mysinger described the shear size of his piece by and said, “Unless you walk up to that horse and look at it for real, it’s hard to imagine it’s that big.”

The Student Art Show was not without a presence of 2D art pieces as well. The largest painting at the show “2019 Floridian Exhibit AHM Mars 3050” was created by Renny Simon. Not only was this painting large but it was boistering with extra tidbits hidden in the details, each with a story of their own.

Ian Patterson received an area award for his illustration, “The Opossum King,” which featured a skeletal opossum draped in black robes. Patterson expanded on his work saying he got a lot of inspiration from Dark Horse and Spawn Comics to develop his own style.

The “Best in Show” was awarded to Abdul Williams for his painting, “Fallen Holiday.” Guest judge Tabitha Nikolai praised the painting on its “Balance of technique and representation” saying, “It has these abstract moments in it, where it’s not exactly clear what’s happening but it still has an energy about it.”

Hailey McDonald’s sculpture, “Archibald the Birthday Cat” featured a fluffy cat body fitted with a human face, hands and feet. McDonald found her sculpture supplies at local thrift stores and described her process in making Archibald as, “I need to run with the creepy.” This creepy cat awarded her with first place at the Student Art Show. McDonald encouraged CCC students to come down and witness the work of their peers. “You’re blown away. Everyone has so much hidden talent,” McDonald said.

This year’s Student Art Show was filled with great works in all sorts of mediums and will be open until June 6; students are encouraged to stop by Alexander Gallery to see the hard work of their fellow classmates.