Another brick in the Yellow Wallpaper

Clackamas Community College’s own Sue Mach has struck the creatures at the play with her cunning scripts, and she’s currently striking twice at once. Dual shows at CCC and CoHo Productions in Northwest Portland both have Mach’s name in the byline.

Before the stage is set, some exposition should illustrate the scene.

Mach’s journey to theater marquees was first paved by attending Pacific University for an English degree, coming to Portland State for an interim period and finally earning a graduate degree in creative writing from Boston University. There was some on-the-job learning though, as Mach said, “A lot of my theatrical education was just doing it.”

Closer to home is that Mach’s ascent to Portland theater powerhouse began while she was a student at Portland State, in between earning her bachelor’s and master’s. Her first play, “Monograms,” was a firework that gained her attention in 1995. “Monograms” was produced by now extinguished Portland Rep, and then went on to be produced in New York City at Theater for the New City.

While at PSU, Mach took classes from Craig Lesley, a twice Pulitzer Prize nominated fiction writer and educator who is now retired.

“He was probably the person who inspired me to become a teacher,” said Mach.

She had a double debut in two different Portland theaters of the plays “The Lost Boy” and “A Noble Failure,” awarding her press attention and awards for writing.

That double debut foreshadows another one happening right now.

Her two works that are hitting the stage right now are “The Yellow Wallpaper” at CoHo Productions and “The Shadow Testament” here at CCC.

“The Yellow Wallpaper” is Mach’s adaptation of a short story by Charlotte Perkins Gilman. Known as a staple of English classrooms everywhere, Mach has co-produced the play at CoHo with filmmaker and actress Grace Carter.

“The Shadow Testament” is being produced at CCC starring CCC students and directed by Jim Eikrem. Eikrem had copious reasons for selecting the play for production at CCC.

“I liked the structure of it, I liked the subject matter, I liked the fact that it was based on true events that took place in Oregon in the early part of the 1900’s, and I also thought it was really great to be able to collaborate with one of our faculty members,” said Eikrem.

On performing in Mach’s work for the second time, Levi said, “It’s so cool to be back and to reflect on the differences in production, of which there are a lot.” Levi also suggested that there are unique stressors from having the playwright in house, “Who knows how many hours and sleepless nights writing the play and here they are watching the play, you really want to do it justice,” said Levi. Levi also touched on the themes and plots of Mach’s work, and said, “She seems to have this knack and this eye for historical fi ction.” In fact, many of Mach’s plays could be classified as historical fiction; “Monograms,” “The Lost Boy,” “The Yellow Wallpaper,” and “The Shadow Testament” all fit the phrase.

The Shadow Testament’s first production that Levi acted in was part of the Fertile Ground festival, a series of plays city-wide. “It’s a festival of new plays, not always local plays, but generally local new plays,” said Levi.

Fertile Ground has done well by Mach, who’s had four plays performed as a part of the festival. Her production of “The Yellow Wallpaper” at CoHo is part of the current Fertile Ground season. Mach explained how “The Yellow Wallpaper” came to be a part of this year’s festival. She said, “It’s a co-production, so Grace [Carter], who is also the lead actress, she and I submitted an application to Coho to see if they would pick our play.”

“They did, and so they gave us some money. We have to raise the rest of the money ourselves, but we’re able to choose the actors and director, so there’s a lot more freedom,” said Mach.

CoHo then placed the new work in January. “Because this is an original script they decided to put it in at the same time Fertile Ground is happening,” said Mach.

“The great thing about Fertile Ground is that people can buy a pass, and then you can go see a ton of new work happening all over the city.” Mach also touched on the press advantage of premiering a new play in the festival. All the plays benefit from coverage of one, as they’re all wrapped up in Fertile Ground. Reflecting on her success in the theater Mach had some final words. “In the theater no one makes much money, so it’s really about the integrity of the work.”

Considered by some to be a quintessential piece of American literature in the feminist movement ‘Yellow Wallpaper,’ a play published in 1892 by Charlotte Perkins Gilman, adapted by Clackamas Community College’s own writing instructor and department chair, Sue Mach, sheds light on the dark realities women faced in an era ruled by men.

Playing at CoHo Productions in Northwest Portland through Feb. 6, this dramatic and emotional play shows the adverse affects of solitary confinement, a traditional theme found in the feminist genre.

Through journal entries, Charlotte, played by Grace Carter, hides from her husband. We watch her helplessly deteriorate as she builds an absolute bête noire for the “Yellow Wallpaper” that has become her existence.

Put on bed rest as prescribed by her husband, a physician, the play is set almost completely in the bedroom Charlotte inhabits for the three month curing process she is forced to undergo.

Using a micro-stage that seats the audience damn near in the room with Charlotte, we are forced to feel her discomfort and understand her insanity.

The tiny set is comprised of a bed, a wooden chest for her few articles of clothing and lots of nauseating yellow wallpaper.

With a psychotic performance by Carter and the symbolically small but encapsulating set that drives you mad with dancing wallpaper and shadow women who scurry behind the walls, this entertaining, dark, gritty and truly enlightening play is well worth seeing.

For more information about the play visit www.cohoproductions.org. 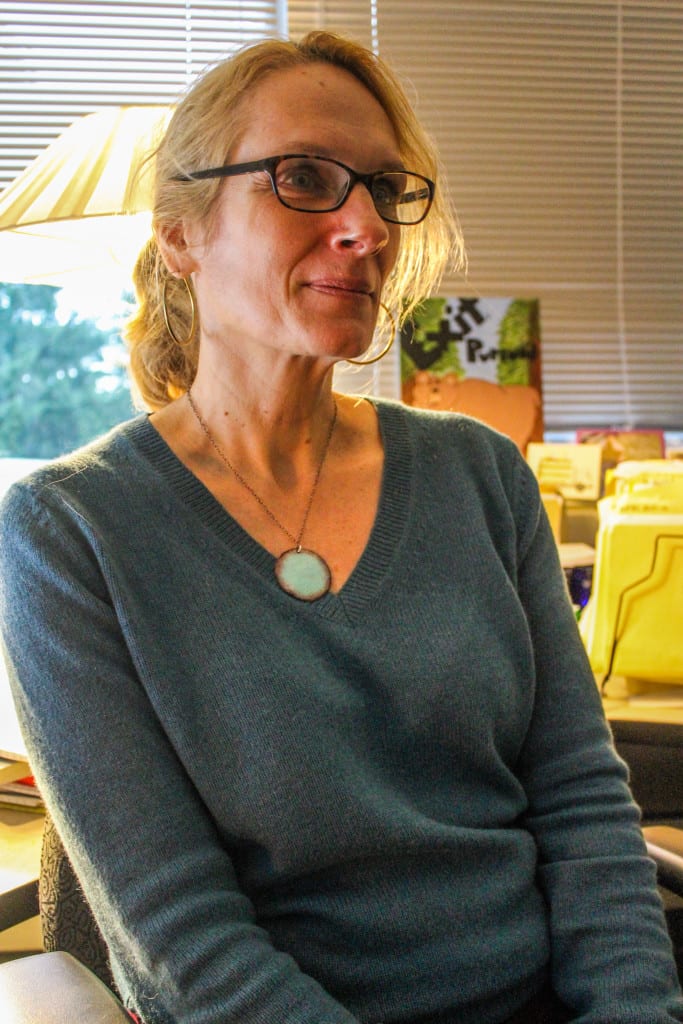