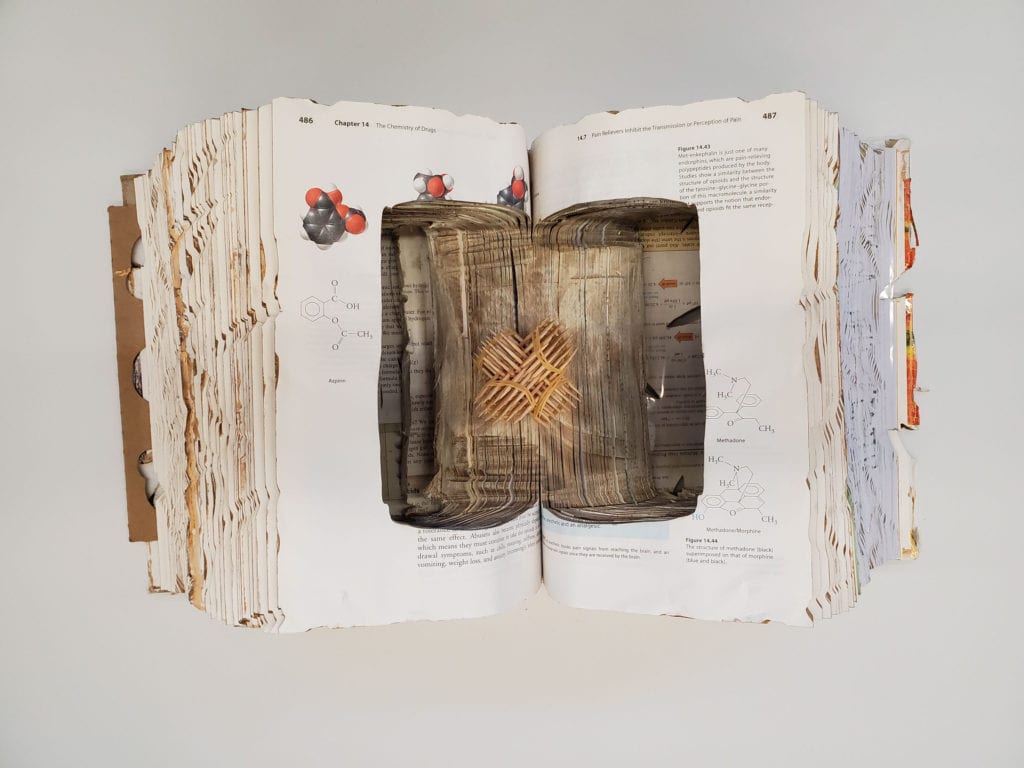 On Dec. 3,  2019, you might have noticed texts and emails circulating across campus alerting students and faculty of a suspicious package found in the Dye Learning Center. “I was genuinely scared there was a threat,” said current student Nolan Golden over Snapchat. “I had no idea it was related to my artwork.”

Campus police responded to the potential domestic attack by shutting down Dye for investigation. Just under an hour later, they would conclude there to be no threat on campus.

“It was speech day and my presentation was first. My teacher pulled me aside before class started, and informed me I had an interview with the police,” Golden said.

The infamous piece was intended for his Art 115 two dimensional class. “I liked to push boundaries and made it more 3D,” Golden said.

According to Kate Simmons, Golden’s teacher, “The project we explored was to create a book. The book was to have at least six pages in which they conveyed a narrative, so they get the opportunity to tell whatever story they want, as long as they’re in intertwining this awareness of global or regional or local issues. And so through their book, I see them.”

His creation is composed of three chemistry textbooks making it over 2,000 pages in length. “[Golden] worked very hard to bind them all together in a way and make it a new form,”said Simmons.

The book when closed didn’t look as friendly as it appears in the photo to the side, as it featured wires and holes. “I wanted to hollow out the book and create a physical narrative instead of the traditional story told with words. I wanted people to feel attracted and then repulsed,” said Golden.

Following the incident, Golden was able to sit down with college president, Tim Cook and discuss the matter. “I wanted to apologize to Tim. I believed he deserved the courtesy. We had tea together and laughed about it,” said Golden. I think that this could not have happened to a more caring, thoughtful, sincere, humble student. Nolan is just so thoughtful and it saddened him immensely to think that this caused as much hubbub with the entire campus.” said Simmons.

Currently working towards his associates  transfer degree, Golden hopes to later become a product designer. He plans to transfer to the University of Oregon and later design school after further studying industrial engineering here at CCC.