Battle of the cupcakes

Sweet, fluffy and oh so fattening; cupcakes are a popular dessert for all ages. After learning that there are a few cupcake shops within five miles of Clackamas Community College, I was determined to find Oregon City’s best cupcake. Little did I know, I was in for a real treat.

I started my quest on Friday, April 17. I knew that with the help of the co editor in chief and fellow cupcake lover, Erin Carey, we would be able to find the perfect cupcake. We started our journey at Fat Cupcake, located about a half a mile or two minutes away from CCC. You can’t tell from the outside, but the inside of the shop is very cute with a lot of colorful, vintage-looking decorations. There are tables located inside and outside the shop (weather permitting).

While the inside of the shop was very pretty, what really mattered was the cupcakes. I asked the store owner, Anjelica Hayes, which cupcake was most popular. She suggested Carey and I try the “Charlie Brown.” She explained it is chocolate cake with a Reese’s Peanut Butter Cup baked into the center and peanut butter buttercream frosting. I was practically drooling at that point.

I also wanted to try something really unique that I haven’t seen before, so I ordered a “Lemon Doodle.” Hayes informed Carey and me that this cupcake is a white cake with a snicker-doodle cookie on top with lemon buttercream. Carey was particularly excited to try this one.

Before we gave the first two cupcakes a try, we moved on to our second destination, Pure Bliss Bakery. This bakery is located about two and half miles away from campus or ten minutes. From the outside it looks like a small house, it would be kind of hard to find if it weren’t for the flags outside that indicate that it is, in fact, a bakery. The inside is very small with not many decorations; there were only a few small tables. What surprised me most was when I looked into their case of baked goods, they only had one cupcake available. Carey and I got the one they had, which was a “Shirley Temple” cupcake. They mainly had scones and different variations of cinnamon rolls, which was unexpected considering their logo has a cupcake on it.

Our last stop was Sugar and Spice Cupcakes. After getting lost and doing a little further research, we learned that this shop only makes their cakes to order, therefore they are out of the running.

Finally it was time to try the cupcakes. The “Charlie Brown” was the first contender for the perfect cupcake. Carey did not like how much peanut butter was involved, but I loved it. I thought everything was spot on about this cupcake, I give it a 10 out of 10. Next we tried the “Shirley Temple” from Pure Bliss Bakery. It was disappointing to say the least. The frosting was clearly made with a lot of shortening and it left a greasy feeling in my mouth. The cake was also kind of dry and crumbly, so I think it deserves a 2 out of 10. The “Lemon Doodle” from Fat Cupcake was the last cupcake to try. Carey really enjoyed this one, she liked the lemon buttercream. I thought it was good, probably an 8 out of 10, but I preferred the chocolate-peanut butter combination of the Charlie Brown.

Overall I don’t think you could go wrong with anything from Fat Cupcake. Pure Bliss Bakery was more of a café atmosphere than a bakery, I would go back for a scone and a coffee, but definitely not cupcakes. 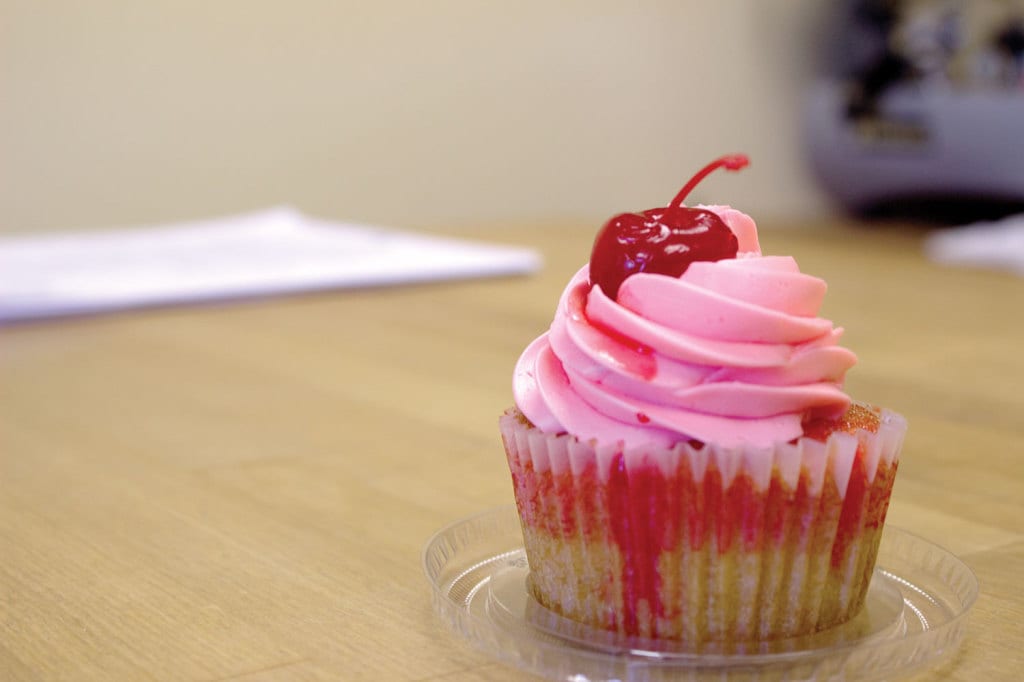 The “Shirley Temple” cupcake from Pure Bliss is beautiful but misleading.