Category is: Drive in Drag! 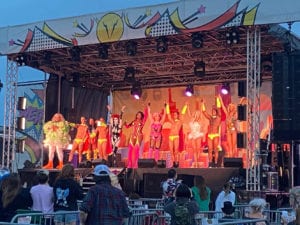 The drive-in event was held in the parking lot of Clackamas Town Center in early May.

In early May, I attended Voss Events, Drive’n Drag Saves 2021, which featured a multitude of drag queens from the ever so popular, “RuPaul’s Drag Race.” The drive-in style event was held in the parking lot of the Clackamas Town Center in Happy Valley. There were spaces for cars to watch and enjoy the show as well as personal VIP patios in the front of the stage for groups of four people from the same household.

The show was superhero themed, which expressed the drag queens metamorphosing from their male self to superheroes. When the wig comes on, they become the superhero drag queens they are, ready to save 2021 and obliterate the wretched 2020.

The event was emceed by the electrifying Asia O’Hara. She was first seen on screen in “RuPaul’s Drag Race” season 10, finishing in fourth place. She brought finesse and laughter to the crowd, all while being unscripted talking with fans in the audience. During the performance, Miss Asia gave one show goer an unexpected thrill after noticing them in the audience dressed as a unicorn. She then named the unicorn the mascot of Oregon, a well-deserved title.

Every queen displayed their best acts of charisma, uniqueness, nerve and talent! We were served all sorts of looks on stage. Plastique, a new favorite queen of mine, opened  the show with six-foot wings on her back portraying the angel that she is.

There was the dazzling Naomi Smalls strutting a sexy 70s disco vibe.

We were blessed with punk rocker queen, GottMik.

We witnessed the ever so beautiful Rosé who took us on a journey with her live singing (no lip syncing there), and she absolutely killed it!

Miss Kim Chi, aka Kim Chick for this performance, came out in an egg suit which later was revealed to be full chicken glam.

The Iconic Vanessa “Vanjie” Mateo was in attendance strutting her version of drag wonder woman and was definitely there to save us all. All the queens were full of comedy, death drops and lip syncing for their life!

Even though the Voss Events Drive n’ Drag has come and gone in Portland, you can witness 90-year-old Darcelle and their staple lip syncing of Glen Campbell’s “Rhinestone Cowboy” in his iconic assless chaps. The club has been operating for 53 years. It is now a nationally recognized historic site in the United States and will hope to live on for many more years to come.

The Voss Drive n’ Drag event was fantastic, bringing together audience members from all different ages, backgrounds, races and economic classes. A place truly welcoming to all. If there is any time that you want to let your guard down, be a little wild and weird, a drag show would be the place!

Lizzy Marine is from Canby, Oregon. She is the Arts & Culture editor for The Clackamas Print and has been on the paper since 2020. After graduating from Clackamas Community College, she plans to earn a degree in Communications. Lizzy enjoys painting, watercolor, concerts and theater.