Clackamas Community College held the 2022 Virtual Student Art Show on May 11, which was hosted by the CCC Art department and special guest judge Nathan Orosco.

Orosco is a professional sculptor and instructor at Mt. Hood Community College. He was brought in to judge the art that had been submitted to the gallery.

Throughout the show, they presented a multitude of different art pieces which were all created and submitted by CCC art students and ranged from acrylic paintings, digital art and even home videos.

It was amazing to see all these different art styles come together and be able to look at the journey that these artists have all made this year.

Now while there were many amazing artists and plenty of area award winners, the top three were as follows:

Third place went to Kyle Cochran and his digital painting ‘Lady of the House’ which pictured an original character made by Kyle named Ada. 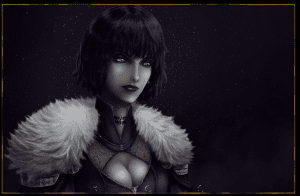 Second place went to Meruzhan Mazmanyan and her acrylic painting titled ‘Still Here, In Grief’. This piece depicted a skull next to a spilt bottle of pills with plenty of room for interpretation. 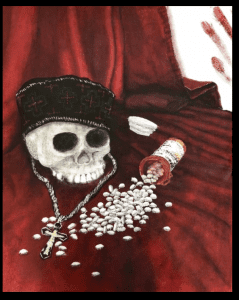 First place went to Justine Reyes and her charcoal on paper piece titled, ‘Stellar Cottage’. This art detailed a woman staring through a telescope while surrounded by planets and constellations. 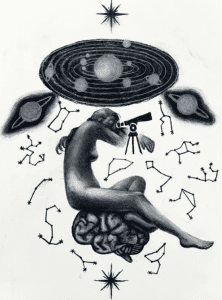 Finally, the Best in Show award went to Ruby Webb and her video piece titled ‘Home!’ This final piece shows artist Rudy Webb in various rooms throughout her house while a narration of why she loves her house plays in the background.

Now while every piece was amazing in its own right, these are the artists whose pieces Orosco judged as the best this year.

Orosco noted multiple times throughout the show that he enjoyed seeing the pieces that drew more from eastern and pop-culture sources, stating that, “nothing is new, we are just seeing more art that pulls from those eastern influences, such as anime, or other pop cultures.”

Nathan ended the award ceremony by stating, “it was a true gift to look at everybody’s work.”