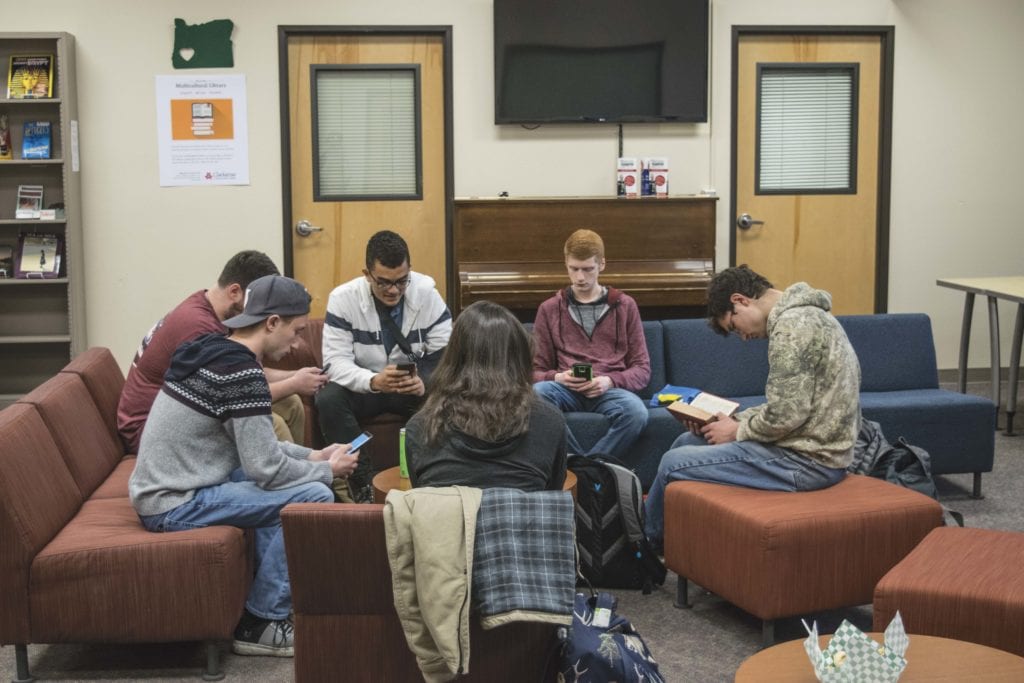 The ReGeneration Bible study group gathered to read on Feb. 1 in the Fireside Lounge at Clackamas Community College.

THE CHRISTIAN COMMUNITY IS RISING ON CAMPUS

Story and photos by Jeanette Wright

What puts “community” in a community college campus more than student clubs? One type of student club on campus is religious groups. Clackamas Community College’s Oregon City campus hosts three religious clubs, Chi Alpha, ReGeneration and the Brown Bag Bible Study, all of which aim to connect students together through their respective Bible study groups.

All three groups are Christian-based, but all have their own differences in how they operate. One main similarity is their focus, as leader of the ReGeneration group, Taylor Reavely, said.

ReGeneration is a campus ministry group based out of New Life Community Church in West Linn, Oregon, and is fairly new; Reavely started the group last September. After attending CCC as a student-athlete, Reavely said he felt a need on campus for a personal group study to help students connect with each other. The number of attendees varies term to term, with about 20 students participating regularly in the four weekly meetings.

“Our purpose, as we set out, really, is to be a spiritual resource, and a safe place for students, as we discover who Jesus is and what it means to follow Him,” said Reavely. “Our goal is to engage students and connect them on campus, but not just leave it on campus, because that’ll change every quarter.”

The student-to-student discussion dynamic is something ReGeneration focuses on.

“Having the group be a place where students can come and find a community just focused on God, other students that are curious, you know, it’s a good way to just grow and learn,” said Ben Foullon, a student leader of ReGeneration.

ReGeneration meets four times a week, with a different person leading the group on each of those days. Providing a welcoming atmosphere and wide area fordiscussion is key to the interaction of the groups.

Whether a person who has a religious upbringing or not, believes in God or not, most of us have questions, and things in lifethey go through, that open them to some ideas,thoughts, said Jamie Dewees, community advisor to Chi Alpha.

“I believe that, to be effective, and to promote, is to invest relationally, and really try to get to know people,” said Dewees.

Their discussions primarily surround the scripture the group reads that day, although topics have a huge range, depending on the people attending.

“[ReGeneration is] a great group. I enjoy the individuals, too, and form of expression is a lot more important than the reasons that might surround it,” said Greyson Mbock, a CCC student who attends two of the groups.

Mentoring and providing life advice is a huge part of the campus ministry for Beth England, leader of the Brown Bag Bible Study. “I think the most important thing is having the opportunity just to build a relationship with the student, so that they know that there’s a safe place to go or a safe person they can talk to about anything,” said England.

England started the group, an offshoot of NorthWest Collegiate Ministries, in 2002, and has led the group on campus since.

Brown Bag Bible Study is smaller, and more immediate, with a meeting once a week on Wednesdays, but England said she tries to be on campus Monday through Thursday, just to be a resource for students.

Even though the three groups are separate, they are united in the mission to create community and togetherness on campus.

Students can find more information about the groups, including meeting times and locations, on posters on billboards across campus, or the group websites.