When was the last time an artist surprised you? Like really surprised you? Think for a moment how many artists that manage to mix and mingle seemingly odd bedfellow genres successfully.

Now consider how many of those artists are local. There are only a few. Pink Martini comes to mind. As it turns out, one such artist records right here at Clackamas Community College with alumni and music tech Sacha Muller.

Coco Columbia (a.k.a. Dana Elizabeth) and Muller teamed up recently to record an EP at CCC’s “state of the art” recording studio, according to Muller. When asked why she chose to record at CCC with Muller, Columbia said:

“After working with Muller, I must continue to record at CCC,” said Columbia. “He’s a beast … It’s amazing that CCC can have such a great recording studio and a wizard of an engineer driving it. I’m launching another kickstarter in a few months and plan to record my second album at CCC. Super stoked!”
The recording studio at CCC isn’t just impressive for a community college either. Even Portland State University lacks the quality of equipment that CCC has to offer.

“From what I know and have heard [PSU] doesn’t have this kind of facility … some PSU students actually come here for our facilities,” Muller said.

Columbia’s music seems to pluck from so many musical gardens, one has to wonder where all those influences come from.

“I listened to rock/punk/metal early on, jazz in high school and soul, R&B and hip-hop in college,” Columbia said.

“The vocals are pop/soul inspired, the arrangements, harmonies, and improvisations jazz inspired, and the electronic aspects come from hip- hop.”

Basically, she is influenced by everything. And it shows in her both her live and studio performances.

Recently I was lucky enough to catch up with Columbia and her band at a recent concert at Laughing Tree studios in Portland. Following Johanna Warren and Leo (two other excellent local acts), Columbia and her band came out like a well-orchestrated riot. Her drummer, Brandon Braun (who looks remarkably like Clark Kent) plays with the enthusiasm and energy of Dave Grohl and the precision of a surgeon. Her guitarist, Grant Sayler, plays guitar like Eddie Van Halen would play if he were raised in a jazz club. Then there is Columbia herself, whose vocals keep the whole thing together like a silk wrapping around a hip-hop/jazz/pop/soul sandwich.

This is probably an overstatement, but it was a very impressive show, and I’m not the only one who is impressed by her music.

Recently Brian Rose, music tech and teacher at CCC said, “She’s making some really cool stuff … it’s like nothing you’ve ever heard before.”

With the technology of CCC’s recording studio, and the talent of its alumni, expect more great things to come out of the music program. You never know what you might hear.

Story and photo by: Nathan Woosely 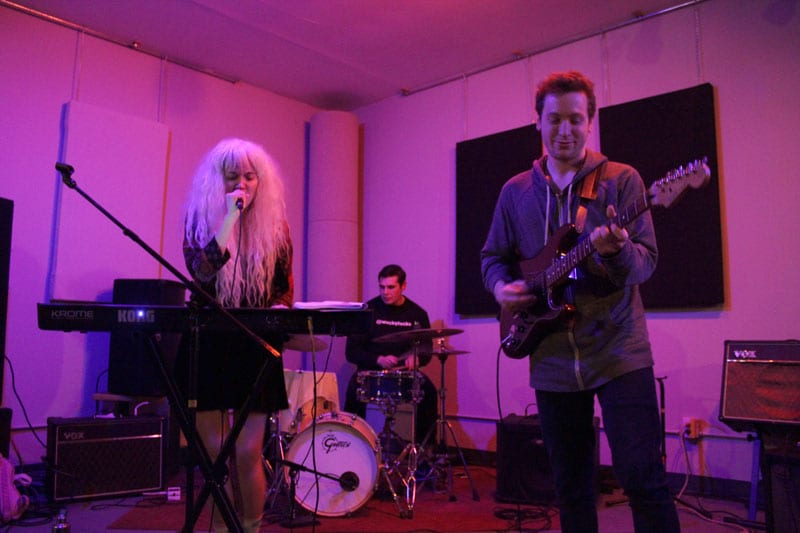