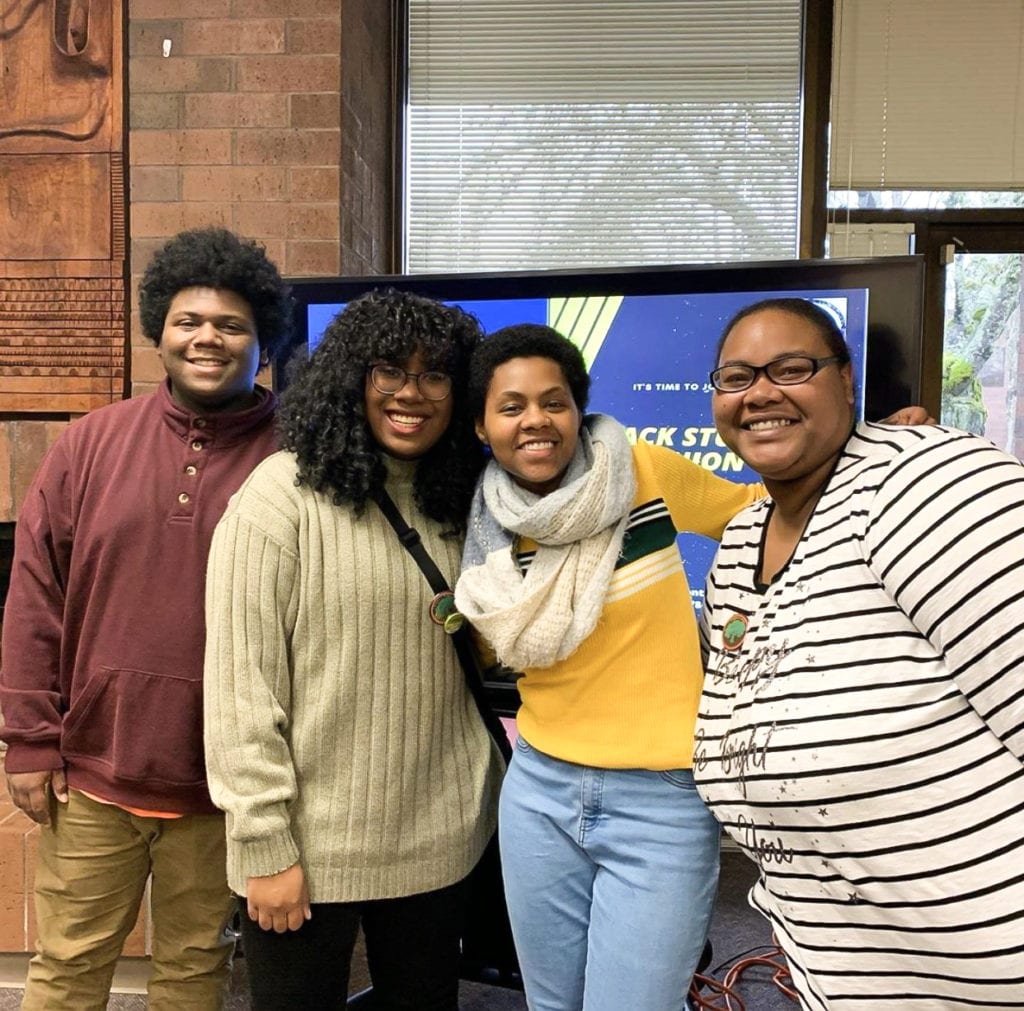 Clackamas Community College made its own history during Black History Month. The first Black Student Union event in more than 10 years, “Heads Up Black History” was held on Thursday Feb. 5 in the school’s community center. The event hosted two guest speakers, one a CCC human services student, Alley Williams, and Donnisha Stone, the branch manager of the Oregon City Department of Human Services. Both women spoke on topics ranging from human services and unity, to finding your purpose and empowerment. There was also a brief introduction to the Black Student Union with a word from its founder and president, Stephanie Harris.

The 18 year old, who is also dual-enrolled at Clackamas Middle College, said she started the BSU as a safe place to connect with other students. CCC’s website states that the group’s purpose is to bring black students of Clackamas Community College together and create a place of inclusion for every person of color to feel accepted and welcomed — an important mission to Harris who moved here five years ago with her grandma from Conyers, Georgia. Harris experienced culture shock when going from a predominately black school to one with a population of around 300 — only a handful of those 300 students were black.

One of the biggest challenges that came along with the transition was dealing with feeling of inadequacy that stemmed from being a minority.  Harris felt that she didn’t have the same support and camaraderie as her fellow peers.

The diversity in the crowd at the BSU Black History event reflects the diversity of their meetings, which includes white students as well. Harris said, “The best thing about [the BSU] is being with people who care about you. I kid you not when I say it’s a family. Even though everyone involved haven’t known each other very long, there is a connection among its members. We’re similar because we support and accept each other,” Harris said.

The BSU meetings range from 10-12 people and meet every Monday and Wednesday from 1-3 p.m. in the Dye Learning Center. They discuss many topics from race relations, community and  politics.  That said, they like to keep the meetings respectful and non-divisive.

“Everyone has different options and everybody wants to say what they want, so our number one thing is to make sure you’re listening to what other people are saying and not just ignoring them or disapproving of them because you don’t agree with them,” said Harris.

Her favorite moment in the group was when she and BSU Vice President Elvan Wilson were approved for a trip to Georgia. “We were super calm the entire time, then we got approved and calmly sat through the rest of the meeting.  After we left, we went to my car and we were just so happy and screaming,”  Harris said.

The students planned to travel to Georgia on Feb. 18 for a Black Students Leads Conference.  The conference will feature various black speakers who will teach the students about black history and leadership.

Other than going on trips and having discussions, the group also goes out to eat sometimes as well.  “We’re fairly new and we’re trying to figure out what we want every week — we’re trying to get sponsors and everything.” Sponsors would help enable them to host more events and take future trips.  They are hoping to soon take a trip to downtown Portland together.

Harris is very happy with the support that she’s received because in the beginning, she worried that they wouldn’t be taken seriously.

Harris said she has not had many negative experiences while living in Oregon; she did explain the frustration of being followed around stores at times but for the most part feels safe in Oregon City.  However, she isn’t just sure yet if this is where she wants to spend the rest of her life.

For now Harris is focusing on graduating high school and starting college at either Yale, Brown or Howard in the fall.  When Harris leaves for a university, she will pass the torch on of carrying the BSU to its current vice president, who still has another year of school left. Harris is confident that the Union will carry on long after she’s gone, due to the commitment and dedication of its members.