Comedy, where art thy errors

A beautiful city of buildings, colorful streets and interesting music taking me back to a time I’ve never been. Oh, by the way:

The Clackamas Community College’s theater department takes us back in time with its spring play, “The Comedy of Errors” by William Shakespeare.

I believe first impressions are very important and this all starts with the creation of the set. Can I actually believe I’m in the setting of the play? I could easily believe I was in Ephesus and really enjoyed looking at the set.

The common misconception with Shakespeare is that he’s hard to understand. If you chose to read the “The Comedy of Errors” before seeing the play, it most likely will be hard to understand and you might not want to go any more. The good news is, it’s not rocket science. If the actors play it right, no one needs any back story to Shakespeare. Does some background knowledge help? Sure, you’ll get more out of it. However, good actors have already done the background work for you.

I am familiar with some of Shakespeare’s work and how he writes, but I’m not anywhere close to being a Shakespeare fan girl. I knew very little about “The Comedy of Errors” before I saw it. All I knew is that it was about two sets of twins that everyone in Ephesus gets mixed up and it becomes very comical.

Egeon’s long monologue to the Ephesian Duke, Solinus, can be overwhelming and it sets up the play for all the mass confusion about to happen. Did I get every word that was said during that monologue? Nope. Impressed that someone could memorize all of that? Absolutely. Did I understand basics of what was happening? Yes. The actors played it very well and showed me how the two sets of twins got separated and I’ll admit it was funny to watch.

It’s a classic Shakespeare recipe for disaster, hysterics and confusion with a dash of romance. If you have been itching to see a Shakespeare play, I would highly recommend seeing “The Comedy of Errors.” The CCC’s theater department put on an Oscar-winning performance so you shouldn’t have much trouble following along with the play.

Come to the Osterman Theatre and relax and enjoy the play. Don’t overthink Shakespeare’s language. Watch the actors. This play is similar to watching an old cartoon or “The Three Stooges.” 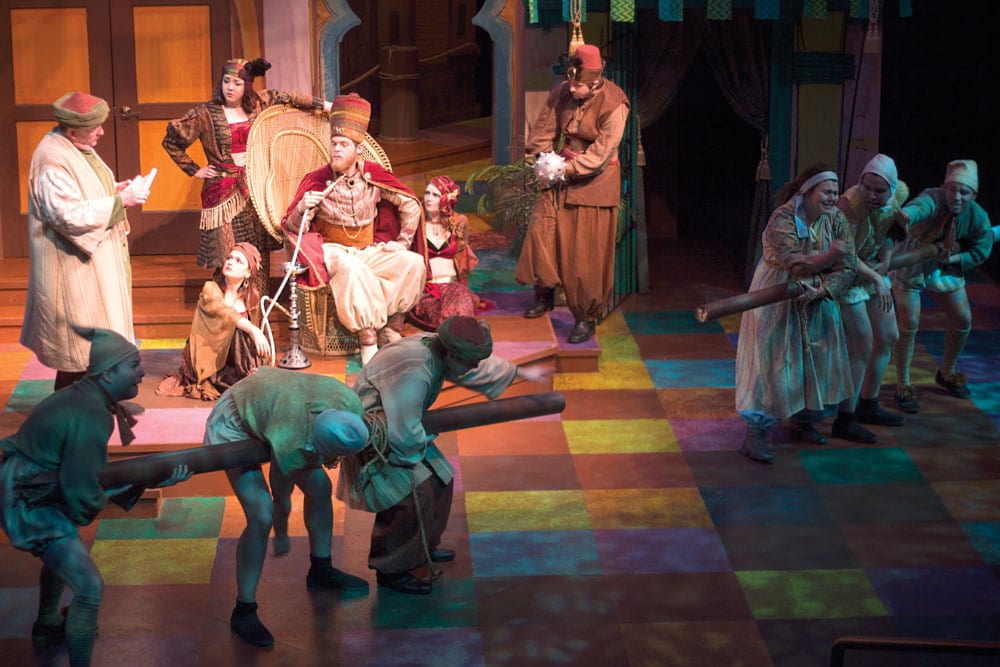 Egeon, upper left, tells the Ephesian Duke, seated, how he, his wife and the twins got separated in “The Comedy of Errors,” still showing in the Osterman Theatre May 28-31, 7:30 Thursday-Saturday and 2:30 Sunday.