“This violates boundaries, and that’s part of the point,” music instructor Brian Rose said speaking on behalf of the recent controversial art piece created by street artist Cape One. The controversy surrounding the piece is based on those “violated boundaries,” not because of its subject matter or content, but due to the artist’s decision to allow paint to make its way on to the ceiling and floor of the Clackamas Community College Niemeyer music hall.

The piece was created “for the students…it’s for your generation,” Rose said. The artwork was commissioned by Rose and CCC to “help artists leave their world behind before entering the recording studio.” Originally the concept for the piece was to create various caricatures of musicians, covering everyone from Bob Marley to jazz musicians to classical artists, but when the artist wasn’t liking the progression of the piece, Rose asked him to create whatever he felt.

Rose said the reception to the piece from his students has been very positive. However, not everyone is as thrilled about the work as Rose and his students. The school ordered the paint on the floors to be cleaned and stripped, although the paint on the ceiling will remain.

Prior to the floors being cleaned, Sacha Muller, an engineer for the recording studio and CCC alum, expressed his frustration with the paint splatters on the
floor saying that the work was “an embarrassment” and he hoped that it would be cleaned up soon.

As a general rule, art murals do not typically extend beyond the boundaries of their proposed location. For instance the City of Portland mural permit requires that murals ”…shall not extend more than 6 inches from the plane of the wall upon which it is tiled or painted or to which it is affixed.” But that’s Portland, and this is CCC, in an art hall where creativity is encouraged.

In any case, the artist was asked to create something that he felt, a work of self-expression. Art imitates life, and that can clearly be seen in the mural. Often
times others repel us just as much as we are attracted to them, not unlike different forms of art. Although Cape One asked to not be quoted on the mural itself,
he did say “If you’re not doing what you love doing, then it’s not worth doing,” maybe that’s what the piece is about? It’s hard to say for sure since it’s abstract, and we see in it what we want to see.

Ironically, while working on the mural, Cape One was simultaneously preparing an art exhibit in The Alexander Gallery also in Niemeyer. The exhibit is
called ‘Cape One’s Fantastic Disaster’ and will be open to be viewed through Feb. 5.

Whether the hallway piece repels or attracts you, it’s worth considering how others view it or see it. Maybe some boundaries should be explored, maybe
it’s okay if we let a little paint drip or splash or spray outside the lines. 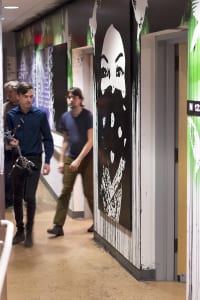