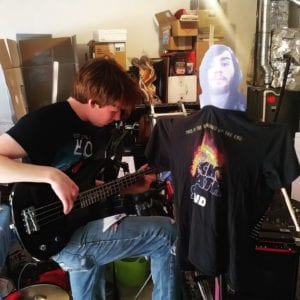 Draven Ford practices, but there have been no live concerts for 8 months. Photo courtesy of The Pigeon and The People.

Over the last eight months, the world has completely changed because of COVID-19. Businesses are struggling, families are disconnected, and schools are scrambling with makeshift at home options. But one often overlooked facet of impact is a huge one for Portland and its nearby towns, and that is the booming underground music scene. Small bands and acts have always been a part of Portland’s vitality, but they have been hit hard on every front. The young punk movement in particular has been drastically altered.

For Draven Ford, bassist and head of the Portland punk rock band “The Pigeon and the People”, practically everything is different.

“It sucks. It’s not even really a change, because everything just immediately stopped,” said Ford.

For his and every other small band in his circle, COVID-19 restrictions mean a full shutdown to many parts of the musical process. The most prominent of those is concerts; packing people together is the last thing to do in 2020. But beyond that, studios and producers are off limits, making recording new songs practically impossible.

“There’s so many steps that can’t be completed anymore,” said Ford.

With things becoming so limited, bands are shifting, breaking apart and losing steam fast. Practically all new rock acts in Portland are self-funded, meaning they don’t earn enough money from shows and merch to even sustain the band, much less live off the profits. Everyone is paying out of pocket to live their passion for music. And so when concerts, production and practicing became difficult, many could no longer justify pouring their lives into the now non-existent scene. The loss of that external energy has been made even more destructive by the loss of an even bigger part of the punk scene, the social aspect. According to Ford, the most important part of the music has always been the friendships formed with the other passionate musicians, technicians and fans that make up the city’s underground music life.

“For so many people it’s the enjoyment of sharing it as much as creating it, so when you take that away, where’s the motivation?” said Ford.

With splintering ideas on how connected we should be face to face at the moment, even the fun parts of making music have had to be put on hold. So without any way to create or celebrate, it’s not a question of how to save the punk scene, but when it will come back.

Cat Castle Art Gallery has seen a variety of attempts to adapt to the restrictions.

“We have seen quite a few house venues and collectives who have switched to an online platform by streaming shows,” said the venue over Instagram.

Many bands also started out with this plan, but by the sixth week, most individual efforts to change according to the climate petered out. Without enough energy to continue in a big way, creatives and collectives alike have for the most part chosen to take a hiatus. This includes Cat Castle, who sees staying afloat as a “small triumph” in itself.

“There’s just no real way to do it. We just have to wait things out and come back when we can,” said Ford.

The success or failure of a band is absolutely dependent on gaining a following and earning a reputation. While that may be a hard pill to swallow, there is no doubt that things will bounce back when venues and studios open up again. These young artists have not lost their passion, it’s just hibernating for now. And the spirit of punk music will be very much alive in Portland for years to come, no matter what it looks like today.

Henry is a Staff Writer for the Clackamas Print. He is an Anthropology major and in his first year of college. He enjoys writing and watching movies.