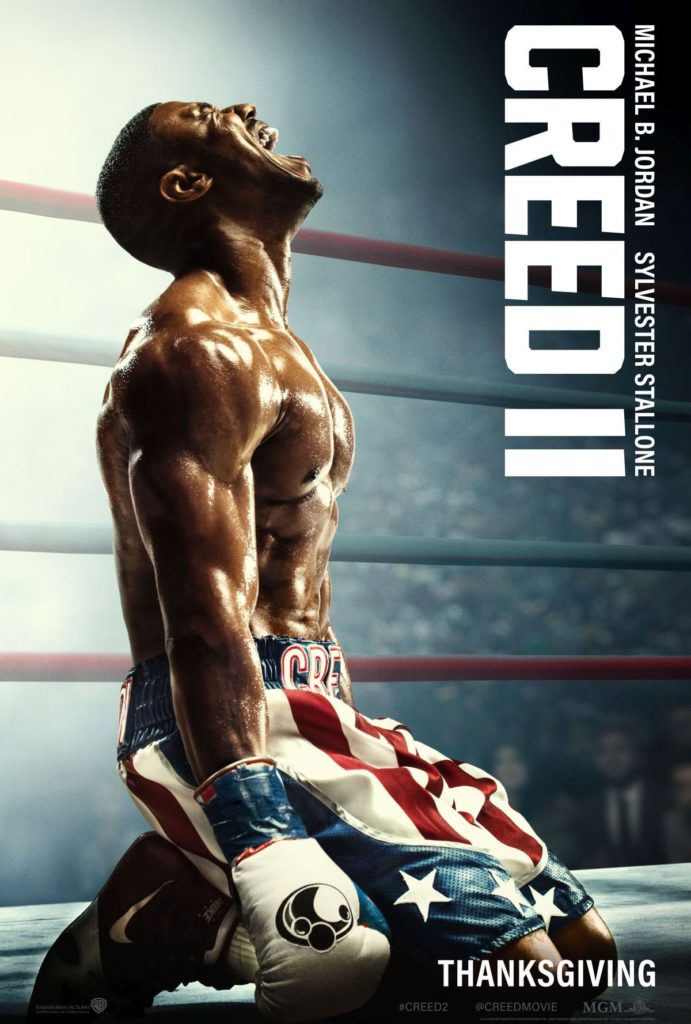 With the overwhelming success of Creed, released in 2015, it was only a matter of time until we saw Sylvester Stallone and Michael B. Jordan lace up their gloves and return to the silver screen for a sequel. Creed 2 holds a few choice surprises in store for its audience and follows through its punches with several choreographed fight scenes. Spoilers ahead — you’ve been warned.

As an individual who’s seen many a fight film, I sat in theaters awaiting what I hoped would be an unorthodox approach to the genre; while there were a few well executed deviations from the formula, the broad overview of the movie remains true as ever to its predecessors: protagonist starts off movie on top of the world, protagonist gets knocked down by a more dangerous antagonist than the previous movie, protagonist trains super hard in an intense workout montage, protagonist ultimately defeats big bad opponent by the skin of his teeth and roll credits. One of the several saving graces in this instance was Adonis Creed’s opponent Viktor Drago, the son of Ivan Drago who killed Creed’s father Apollo Creed during a brutal boxing match in Rocky IV.

The movie opens with a foggy shot of Ivan Drago, played by the original actor Dolph Lundgren, stepping out of his home to be greeted by the chilling wind of Russia where he and his son Viktor reside. Viktor is without a doubt a formidable opponent, as we spend several scenes in the first act seeing him tear through opponent after opponent without so much as a scratch on his face. Cut to Adonis Creed, who has just won the heavyweight championship belt in a title fight and proposed to his girlfriend Bianca Taylor and the stage is set for one hell of a downfall.

With intentions of taking on Drago, Creed enlists Rocky once more to coach him though he is met with a solemn shake of the head. Rocky refuses to train Creed, as Rocky was ultimately responsible for Creed’s death. Rocky was Apollo’s ringside coach, and he didn’t throw in the towel when he had the chance, leaving Ivan Drago free to beat the life out of Apollo’s body. Rocky refuses to make that same mistake, therefore he will not train Creed. This leaves Creed dismayed, and he instead recruits his old gym coach to assist him. Creed is visibly distraught throughout his training and it’s clear that this fight is going to be a tough one.

The first fight between Creed and Drago is intense and we’re treated to some of the wonderful cinematography shown in the first Creed. Hard punches emphasized in slow motion, long shots with dozens of punches, so on and so forth. Creed is getting his butt handed to him — fast. By the end of the final round, Creed suffers a crushing blow to his left rib which causes him to sink to the floor. Just after the final bell, Drago lands a finishing blow to a wounded Creed which disqualifies Drago for throwing a punch after the bell, leaving Creed with the belt still undeservedly around his waist.

This brings forth the falling action of the film, where Creed must lick his wounds and learn several lessons about dedication and hard work before he can challenge Drago once more. Flip back to Ivan and his son in Russia and we’re given insight into Ivan’s life after losing to Rocky Balboa in Rocky III. Ivan was essentially shunned by his country, its citizens and even his wife. This ignited the fire that has pushed Viktor Drago to become the top contender, as his father yearns to take the belt to his homeland where he can be accepted back into the arms of his people.

While in the midst of working up the courage to get back into training, Creed finds out that he and Bianca are soon to be parents. This throws him into a whirlwind of emotions, and serves as the final push to get Creed back into the ring. He manages to win over Balboa, promising that his head and heart will be in the right place against Drago with Rocky at his side. Fast forward through some intense workouts in the desert and a lot of sweat and yelling, and Creed is ready for the second match against Viktor Drago.

The final fight is one to behold, with even more action than the first. Creed is much more refined this time round, and he slips many of Drago’s punches with ease. The pair trade blows off and on with no clear winner in sight, until Ivan instructs his son to go for the injured ribs from the last fight. Uneasy at this proposal, Viktor follows suit. Thirty seconds into the next round and one solid hook to the side later and bam, Creed hits the canvas. If this were an earlier Creed, he would’ve been down for the count, but he’s a father now. He has a family to fight for and he refuses to let the shadow of his father envelop him; Creed rises from the canvas with the intention of finishes Drago once and for all.

As Creed begins to dominate Drago, with cuts and bruises appearing everywhere on the Russian’s face, Ivan looks upon his son and sees what he has done. His son will never quit, and he will ultimately die if this fight goes on any longer. With hesitation in his heart, he throws in the towel. Forfeiting the match for his son. Creed reigns victorious, and reclaims his heavyweight belt. Rocky hugs his apprentice with pride, and once more we are left with a feel-good moment and a smile on our faces.

As a whole, this movie was extremely predictable, though it was the execution of the story that had me jerking my head in the seat as if I was the one being punched in the face each time. The action was superb, and the dialogue between characters was at times moving. This does a fine job of setting itself apart from the first movie, and it stands strong among the Rocky series. I would buy a ticket for a third movie, and hopefully I will be given that opportunity in the near future.