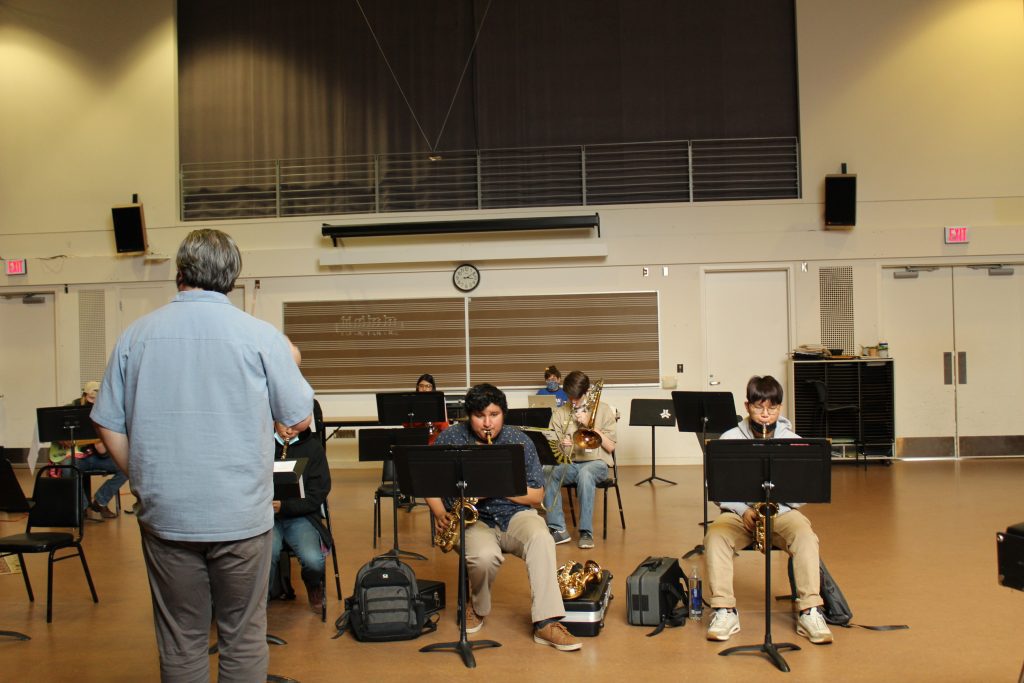 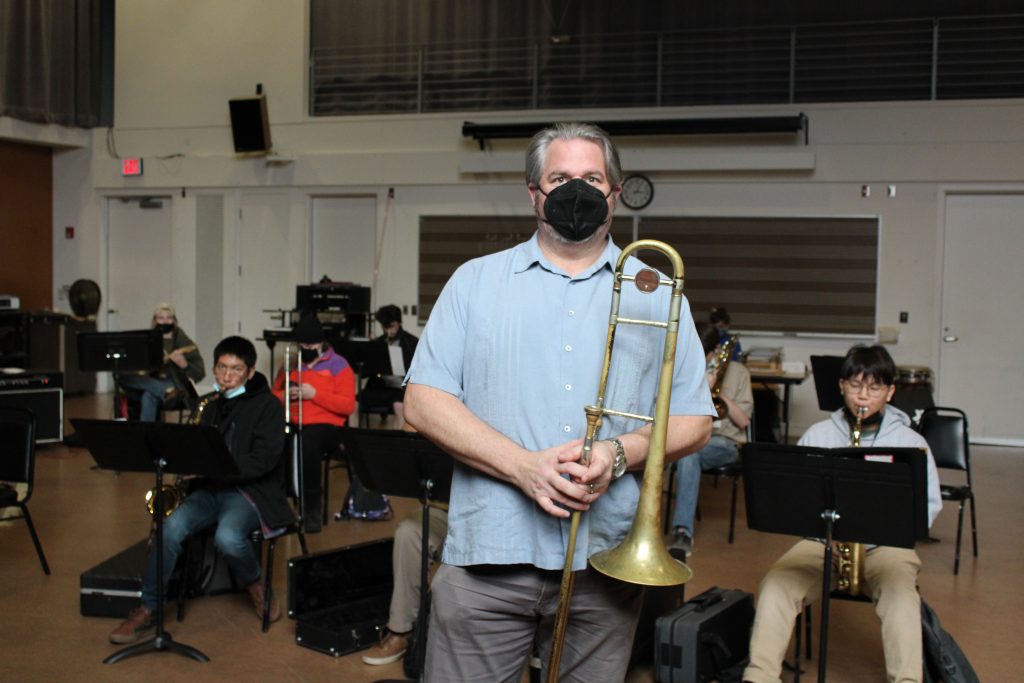 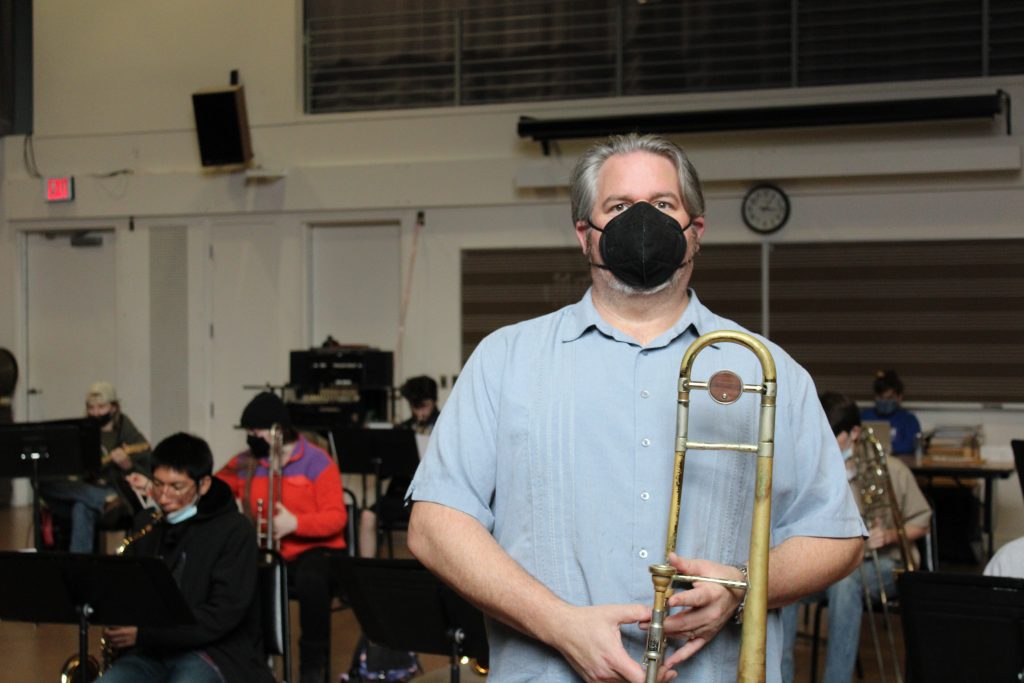 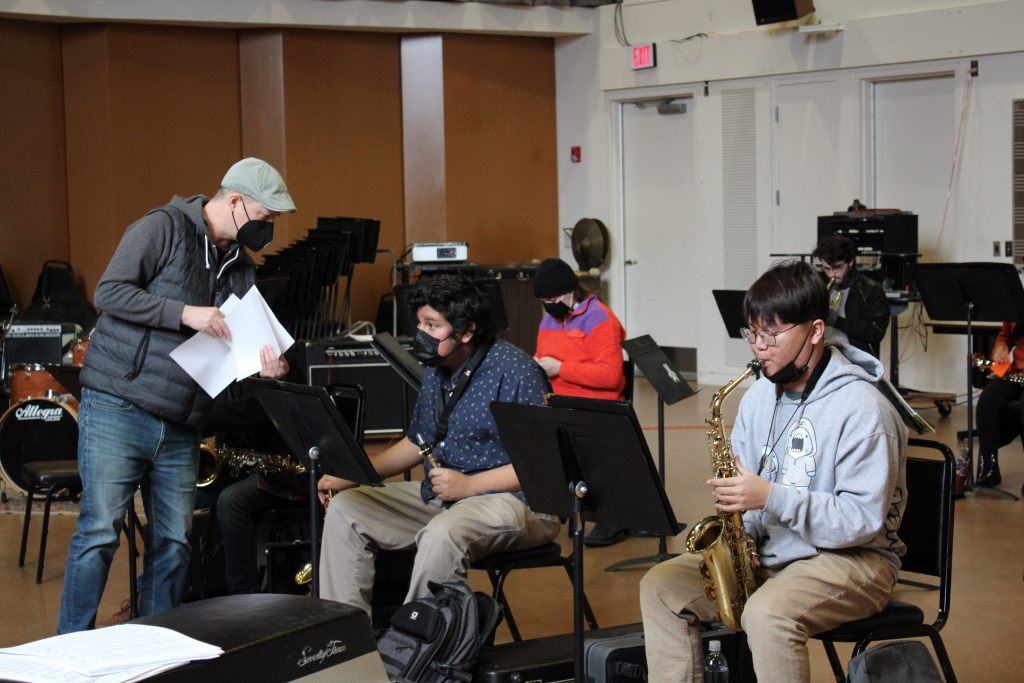 <
►
>
Lars Campbell in front of his In-Person Class. Photo by Jakob Kaiser.

Lars Campbell is the department chair for the music department at Clackamas Community College. In addition to working at CCC, he is also co-founder of the Portland Jazz Orchestra and regularly performs with the Oregon Symphony and the Oregon ballet theater orchestras. Having a background in jazz and classical music with a specialty for trombone, Lars is an incredibly well rounded and talented musician.

The Clackamas Print: Where did you study music? And what was your focus instrument? What musical instrument did you start first?

Lars Campbell: I’m a trombonist. That’s my instrument of choice. And I studied both classical and jazz when I was growing up. I went to a couple of schools. I started at Mount Hood Community College that I went to, while I played in Portland Youth Philharmonic. So I’m also a community college student. And then when I left that school I went off and studied in Greeley, Colorado at University of Northern Colorado for a while, where I studied with a great trombonist named Buddy Baker, who’s a world renowned trombone teacher, and then finished up my bachelor’s degree and did my master’s degree at Portland State in the jazz department.

TCP: When you were growing up, what inspired you to want to become a musician? Did you have a favorite band that made you want to join the music department?

Campbell: When I was a kid, I remember seeing a family friend playing a trombone in their basement when I was like, less than five, I don’t remember exactly how old I was. And so when the music teacher came calling in the fifth grade, that’s when I started. They were asking about instruments to play. And I said, I want to play that instrument that does that thing, you know, and sort of showed the sliding motion of a trombone. And most kids  have the desire to play the trombone, they usually want to play flute, or trumpet or percussion, or something, you know. So they’re very excited to have someone who wanted to be a trombonist. And, I don’t know, I mean, I had lots of favorite bands, I was just really attracted to music in general. And the way all of the parts fit together to create something that’s bigger than itself. I think that’s something that’s really exciting as a performer, to play one piece of a giant hole, and but be able to sit in the middle of that and hear how that hole is created, I think is super exciting.

TCP: So if you could get the students in the music department interested in one particular instrument, which one would it be and why?

Campbell:I mean, I sort of like that we have a wide variety of interests in instruments, because that makes for great ensembles. But I think that something that is not as is not as well developed in the students minds is percussion, because it has such a wide variety of things you can do in it from playing drum set in a jazz band, or rock and pop group, to playing in a classical symphony. Like, one of the things that I’ve learned about recently is the soundtrack to that television show Deadliest Catch. It’s a crab fishing show and about the whole soundtrack to that is recorded of people like banging on crab pots, which is also like a form of percussion instruments. So there’s like so many unique sounds that you can make. And I think there’s a lot of depth to that.

TCP: If somebody like me, who isn’t a music major wanted to get started in music at community college, do I have to become a music major to join the band?

Campbell: Definitely not. We want all sorts of students to be involved. Our department obviously serves a few different types of students. We do serve the music major students who are studying in the music theory classes and all of that. But just as important to us is serving the general student body and giving those people who played the middle school in high school an avenue to continue to be able to perform music. We’ve had really good luck with like all different types, the student who comes straight in from a senior in high school and keeps on playing to students who have taken, you know, five or 10 years off to even students. I’ve had students who were in their 60s who hadn’t played in 40 years and wanted a place to come back and like, get back to playing music together. And I love like, having all of those people together, I like to think that’s a real inclusive environment. And I like to provide the opportunity to our student, body, and community.

TCP: So how do you join the band?

Campbell: Well, it’s a regular class. And so you can just sign up for the class. That’s the easiest way. We also do have community members who aren’t students who aren’t seeking credit. And some of those students will take our band workshop class that doesn’t come with credits attached, but it meets at the same time. So we get all those students in the same room. If I have anyone who’s interested in pursuing that in any way, I always just tell them to come and see me or Amy Cannata because we can help sort of get them geared into the right place for their particular situation. It’s has been something that’s been tough with COVID. In the pre COVID years, you know, the students come right into the office, and we can talk to them and figure out what they want to do and put them in the right place. So we’re dealing with how to navigate getting that information out to students.

TCP: Bringing up COVID: now that we’re not going to have as many classes in person, is the music department one of the departments that’s still meeting in person?

Campbell: We decided to ask for half and half for for this little short window, which, you know, in theory is going to be a three week window of classes. We’re meeting half in person and half online, for the time being, it’s really important for us to be able to be in the same room in some capacity, so that we can play and perform as a group together and prepare for our concert series. If and when we have to go to completely online, we have done that before. But but we’re really trying to maintain some footing of classes where we’re in person, we also have a big room, we’ve got a big band room where we’ve got plenty of space for students to spread out. And I feel like we get a pretty safe environment for the student experience while still being able to be together.

Campbell: Interesting question. Definitely. Let me talk about the first piece of that, and then I’ll answer your question. First piece of that I think is totally true. I think reading music is absolutely reading a foreign language. It is learning to view a set of symbols and have those click and convert into something else in your mind. And I think that is so beneficial to learning in general. Not even just in foreign language, it’s so beneficial to learning anything you want in school, it just creates like these new pathways in your brain that you don’t normally have. And I think that’s a huge thing. There are lots of books written about how music changes your brain and the way your brain functions. So I definitely agree that it does that. I don’t know if it specifically makes learning another foreign language easier. That’s an interesting question. I guess in one sense, I’d say, as it makes learning anything different and better. I think I’d say yes. But I don’t know if I don’t know if specifically foreign languages would be the thing that I would say would be easier.