After getting off work, I ran to my car to drive downtown. It was 9:37 a.m., April 17. It was the eve of a sacred holiday, at least for some. I was racing for Record Store Day.

I drove to SE 30th and Burnside to Portland’s oldest record store; Music Millennium. They were closing in just a few minutes so I raced inside, barely noticing the line already formed against the front door.

Bells chimed on the door as I walked in, but they didn’t disturb the four employees scurrying around.

I walked to the CD section, trying to note what the workers were doing, it seemed they were moving stacks of records. After a moment, I approached the counter where I met a clerk named Elise.

Elise was very cordial, borderline sweet and she told me all about the following day’s festivities. There was to be free coffee and muffins in the morning for the crowd, they expected a very long line at 8 a.m. The freshly fed beasts would then walk through the record store “conveyor style,” circling through the aisles, picking through more than 500 new releases for Record Store Day. She said the line was expected to last until 2 p.m., and that live music would start at 8 p.m. that evening. Thrilled about the fullness of the festivities, I followed the thought outside, where I would engage some of the 11 member line.

After chatting for a few minutes, I dismissed myself to take pictures. I looked back over the group. Some were standing and talking, but the majority were sitting blankly.

I returned at 9:47 a.m., I found the coffee was already cold and the line already long, but I begrudged Music Millennium neither. I filled a cup of cold coffee and walked the three blocks to the end of the line, passing at least 200 people. I took up behind a group of five, a family who had come from California on vacation. After talking to them, we came to the conclusion that the line was not moving a quick pace.

Indeed, it would be 10 more minutes before I took my first step down the three block line, proving the line was not moving at all.

In our boredom, those of us in line began to socialize. I met Lisa and her daughter Griffin, who had come down from the Gorge for a day of shopping and vinyl.

Lisa and Griffin had spent last year’s Record Store Day in London. For them it was a tradition. Lisa joked with me that Griffin was turning 13, and that she was beginning to realize that some of the things her “old” mom does are actually cool. I concurred. Record Store Day did seem to be as cool of a concept as it got.

At some point, maybe an hour and a half in (time was becoming a relative concept now) I looked around and saw nearly every single person engaged on their phone. There was an older woman in front of me who talked a lot about Twitter; Lisa and Griffin were planning what to eat after the event with the help of an Android. Near all had tired of interaction and retired to their devices. I leaned to the father of the group in front of me and joked that we were all waiting in line for 100 year old technology, yet we are inseparable from our modern devices. The joke caught more than his ear, and quite a few laughed. Some even pocketed their phones.

I twiddled my thumbs, shot pictures until I ran out of exposures, and eventually found myself inside after three hours. I wasn’t interested in any of the released titles for Record Store Day, so I excused myself to find several of the CDs I wanted from the night before to play in my car.

As the man who had arrived at 5:30 a.m. the morning before had said, “I think it’s amazing that all these people can come out and just enjoy people’s creativity, their creative work.”

Maybe next time I would make that my focus, and I would find a deeper meaning of Record Store Day. 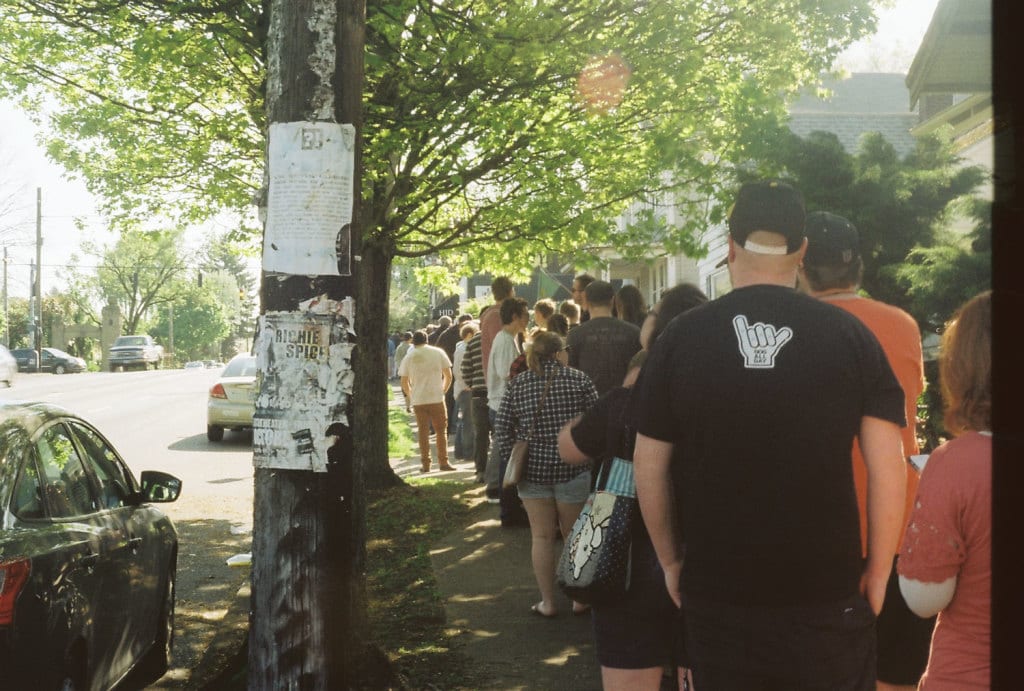 A line of people wait to get into Music Millennium for Record Store Day.

Story and photo by: Matt Rowning