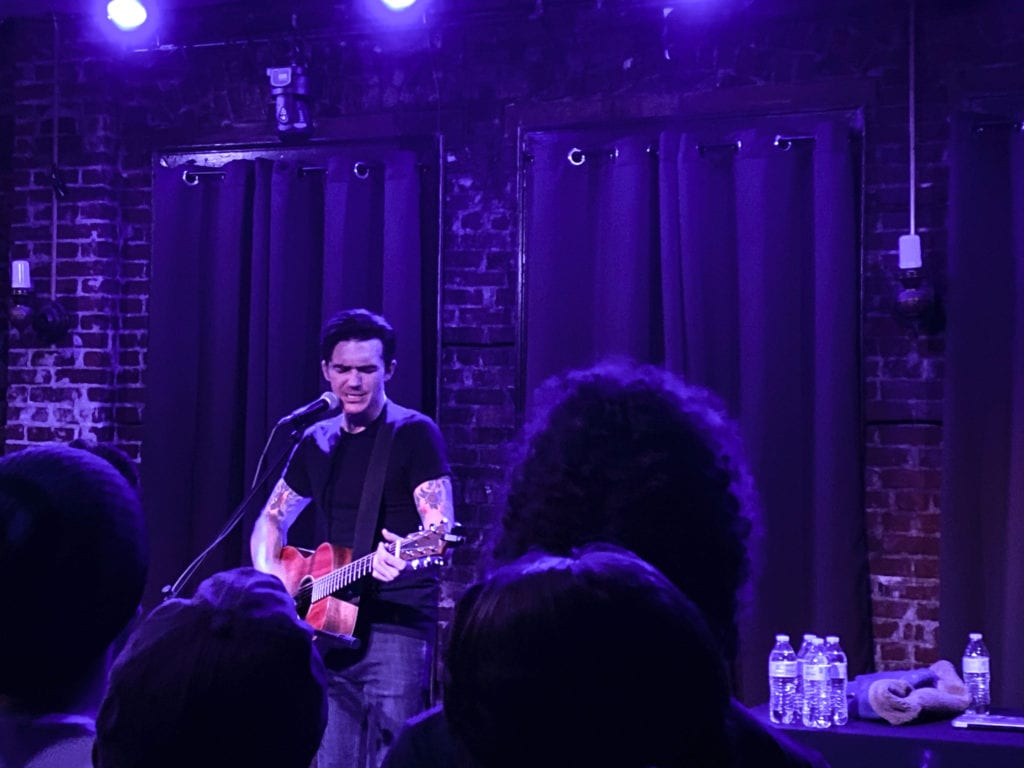 Jared Drake Bell, American musician and former co-star of the Nickelodeon sitcom “Drake & Josh,” performed at the Bit House Saloon on February 6 to a 21+ audience of roughly 50 people. Tickets were a slick $20 and in return Bell performed a number of hits that paved the way of his career including “Found a Way,” “Makes Me Happy” and an acoustic cover of Lil Pump’s “Gucci Gang.” He performed with only a guitar and keyboard and played with ease to an ecstatic audience of young adults. After pulling some strings and tapping some shoulders I had a chance to ask a few brief questions to the talented musician and gain some insight on his passion for music.

Drake & Josh aired from 2004 to 2007 and in that time it amassed a vast cult following, much like the long list of other shows Nickelodeon brought to life such as Avatar, Invader Zim, SpongeBob and many more.  While both brothers deserve credit for the shows success, Bell brought a musical element to the show that put it a step above the rest. He wrote and performed the famous intro to “Drake & Josh,” and a number of his other tracks have been featured in the show. He has also released several singles recently, most notably “Fuego Lento” which has more than 18 million hits on YouTube. Growing up my brother and I would blast the CD album for the show on our first generation Xbox for hours at a time.

While being interviewed his guitar played uninterrupted, cycling through a number of genres. “What makes music special to me? It’s a way to communicate with people,” Bell said, strumming his guitar without skipping a beat.

Throughout the show it was clear that Bell had put countless hours into playing the guitar, which he says any musician must do if they want to be great. “Practice, practice, practice,” he said.

The genres he plays vary, though punk and rock and roll are his bread and butter. When asked which decade of music was his favorite, he went further back than expected. “1950s,” Bell said.

It’s a weird thing, meeting someone that you’ve idolized longer than you can literally remember. While the cool-guy persona he adopted was nowhere near similar to my demeanor, be it as a child or present day, there were still many similarities for a kid to draw from. I was given a red Fender Stratocaster when I was 9, a guitar that Bell also had on the show. In the first episode he and his single mom were moving in with another man and his son — a situation that mirrored mine exactly as a five year old. He and his step-brother waged war day in and day out, a form of battle I was well-versed in against a similar opponent. The list of comparisons went on, and so did the episodes I binged. Before recording started for the interview, I took a brief chance to tell him what the show and his music meant to my brother and I growing up.

As the night drew to a close the audience had grown progressively more amped up, thanks to the stellar performance of Bell and the even more impressive performance of the bartender. Bell was killing it and had very apparently exceeded the expectations of the room, though he had yet to play the famous intro. As he tuned his guitar for the final song an audience member shouted “Hug me brotha!” a popular catchphrase adopted by the fictional step brothers, and Bell and the audience began singing “Found a Way.”  The song went on without a hitch, and by the final chord you would’ve thought we were in a stadium.

“Thank you guys so much for coming out, I’ll see you guys next time,” said Boob, as he left the stage and the many drunk children of yesterday who grew up on Drake & Josh.