Enter at your own risk

It’s October once again! Time to carve pumpkins, eat too much candy and get the you-know-what scared out of you! If you’re looking for a Halloween attraction that will have you sleeping with the lights on for a week, The Print has you covered. Last week, I recruited some friends and we checked out two different haunted attractions: Fright Town and Bella Organic corn maze.

On Friday, I made my way to Fright Town and it did not disappoint. Before you even buy your $22 tickets – $17 after using the Fright Town coupon from the Live 95.5 app – to get in, you have to watch your back. They have zombies and clowns stalking around, more than happy to sneak up on you in an attempt to make you pee yourself.

After buying my ticket I descended the stairs and heard the screams coming from the unfortunate souls below. Downstairs, three different haunted houses stood before me: The Cannery, The Witch House and Baron Von Goolo’s Museum of Horrors. I decided to check out Baron Von Goolo’s Museum of Horrors first. I walked through a heavy curtain and was greeted by a pitch black hallway, where I ran straight into a dead end. I backtracked and entered a room full of spooky things in display cases and what I thought to be a mannequin. Spoiler alert: not a mannequin. I took off screaming through another dark hallway until I found myself looking at a funhouse mirror, a circus tent and a clown. I also saw an emergency exit … and bailed out. There’s a line between fun fear and real fear, and clowns cross that line for me.

Next, I hesitantly made my way to The Witch House. This house has everything to do with witches, from cauldrons and warts to sacrifice and possession. Running from a bloody screaming witch, we found ourselves trapped in a corner with a menacing grim reaper. I pushed my friend in front of me and took off. When I saw the exit, it was like seeing a lighthouse in a storm. Before I made it there, a giant wolf head popped out, snapping and snarling.
Finally freeing myself from The Witch House, I stood there panting until I could breathe normally. Then I realized with dismay I still had The Cannery to get through. My friends dragged me to the final house. When I walked in, a fish man started chasing me into a room full of giant hanging tentacles. I pushed through just to be greeted by a giant tentacle creature who chased me into a field of tentacles and hanging bodies. I had just about had enough when a giant octopus creature came screaming from the corner, accompanied by a strobe light. I could hardly see as I went running toward the exit, with more fish people chasing me out. That was enough haunted house for one night.

On Saturday night I went to Bella Organic on Sauvie Island to check out the famous haunted corn maze. My friends and I bought our tickets and walked down a trail to a tent where a creepy clown told us the rules of the maze. The horror began when we walked through the maze opening and found ourselves facing bloody scarecrows and other ghouls hiding in the corn. Running through corn with clowns, zombies and evil scarecrows lurking around in the pitch black was a nightmare. We followed the path to a dark house and walked inside, bumping into bodies hanging from the ceiling. A light started flashing and a pig butchering a woman screamed from a corner. I went running off into the dark maze.

After getting lost over and over again and bumping into all types of frightening figures, we finally thought we were headed toward the exit. Then I heard a sound and looked behind me to find a guy revving up a chainsaw and coming right for me. All bets were off at this point and I ran for it. You know the girl in every horror movie who falls down and meets her doom? I’m that girl. I tripped and face planted, trapped by a chainsaw in my face. I curled up in the fetal position, waiting for my imminent death. I then heard one of my friends yelling, “Amber, come on, I got you!” and was yanked up. I took off running again with chainsaw man still after me and turned a corner to the exit. I screamed all the way out, wondering why I volunteered for this.

Halloween is all about scaring and being scared. Fright Town and Bella Organic corn maze are definitely going to meet your Halloween needs. Just be prepared for a jump in your electricity bill because you will be sleeping with the lights on for a long time! 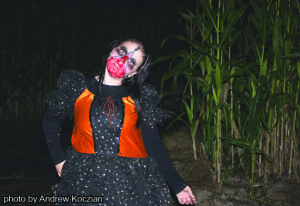