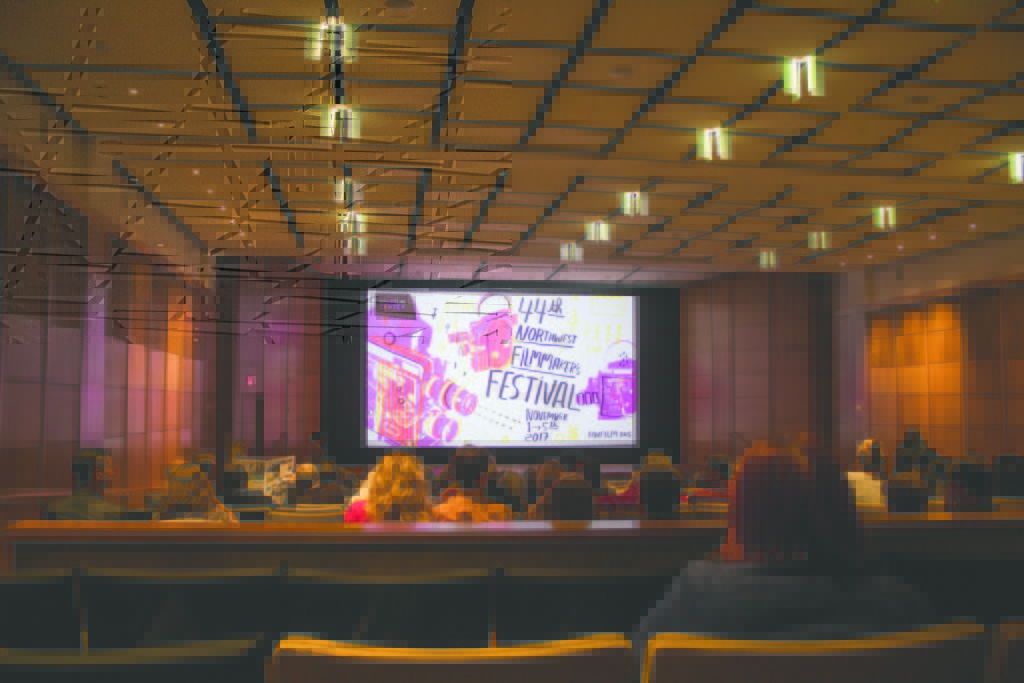 Many words can be used to describe the films shown at this year’s 44th annual Northwest Filmmakers’ Festival at the Portland Art Museum. Beautiful, powerful, poetic, historic, humorous — these simple words do no justice to the amount of talent shown during the five days of screenings.

After sitting down with some favorite shorts, all different and unique, it was clear their backstories and history shown through the voice they used in their stories.

Before the screenings began the creators and co-directors Daniela Repas and Cintamani Calise sat down and gave their insight into the creation of their poetic masterpiece, “Mnemonics.”

The process they chose was to construct animation inside of a live- action film. So if you can imagine thousands of hand drawn pages shot frame by frame telling a beautiful set of stories and memories from Repas’ early years living in Bosnia and her culture before moving to the United States, inside of a live-action film playing at the same time seamlessly intertwining themselves into one another.

The story provides memories of both the good and the bad in a history that will never be forgotten.

“The film reflects something that happened 20 years ago, those are wounds that never truly heal. I actually feel them all over again every time I go back, I relive it,” said Repas. “I’m always after those little moments of blissfulness that happen even in the darkest places, and I wanted to bring that from Bosnia.”

She tells her own story of happiness and hardship as an immigrant and in the process created a strong bond with other immigrant female filmmakers and together created this work of art.

“Half of our crew are immigrants that live in Portland,” said producer Calise. “I’m from England, Daniela and her sister are from Bosnia, and the lead actress is from Serbia.”

They all came together and put aside any differences to show the world what life was like not just the bad that happened but the moments. This story is full of thoughts and feelings that really move the viewer to a new realization about other cultures.

Not all the films took on as serious of a role as this film did.

“A Mew Hope,” directed by David Koesters, is a light, humorous cat-themed spin off of “Star Wars: A New Hope.” The story follows Pickles the cat and his human sidekick as they escape enemy hands in search of their freedom from the “Empire.”

The film is animation using green screen behind the main human actress giving the illusion that cats can fly and shoot lasers.

“I’m limited to what I can do with actors since I don’t really like asking people for help on these stupid projects, so that limits me to basically the people I sleep with which is my wife and my cats and I kind of force them to help me,” said Koesters.

This film had no serious aspects and had the viewer laughing from the very first scene. It was a side project of Koester that he sporadically worked on due to its easy-going nature.

The film “Float” was also screened during the evening. It follows the life of a Cambodian-American and the struggles and hardships of being a minority in Seattle.

Directed by Voleak Sip and Tristan Seniuk this film’s background was based on story Sip shared and turned into a storyline.

“We wanted to showcase a part of Seattle people don’t usually see which is South Seattle, and the South East Asian community,” said Seniuk.

The film follows a young guy named Rocky and his life living in his parents’ basement selling and doing whatever it takes to help his family get by. He struggles not only with money but his interactions with women.

This story breaks back into a more serious topic but with its more direct tone come moments of humor that help lighten up darker moments. These three films are very different and unique in their own ways and yet still draw in the viewers.

The Northwest Filmmakers’ Festival held amazing talent in the shorts categories and did a good job setting up the venue to house the amount of people that attended. The viewers look forward to what is to come from the immense talent.