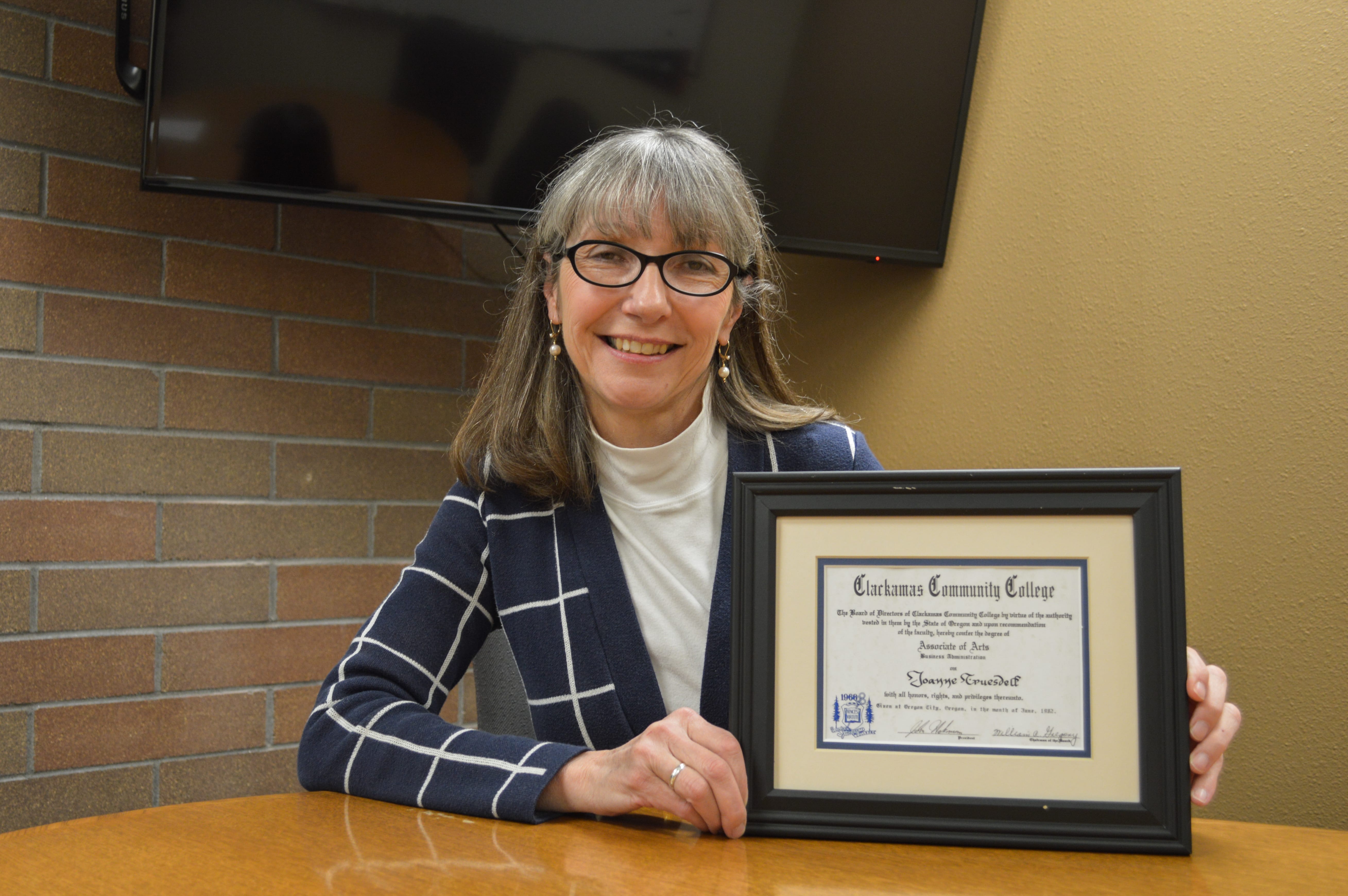 Joanne Truesdell announced on March 9, 2017 that she is stepping down from her position as president here at Clackamas Community College. The Clackamas Print conducted an exit interview with Joanne Truesdell and asked her to talk about her time at CCC, as well as her future plans. Lori Hall, the Public Information Officer for CCC, sat in on the interview.

The Clackamas Print: What has been one of your favorite accomplishments as president?

Joanne Truesdell: I think my favorite accomplishment is getting our veterans education and training center recharged. Our students who access the vet center often don’t have a place, and didn’t have a place to go pretty much all in Oregon. So it was good during the deployment and then the reintegration for us to have stepped up and taken that level of service to people who’ve served the country.

TCP: What path in education did you take that resulted in earning the title of Doctor?

JT: Oh, great! My first degree, 1982 from Clackamas Community College. My last degree, 1997, from Oregon State University. I worked my way through college and by that, I mean I worked full time and went to school full time.

Lori Hall: Share your story about how you came to CCC.

JT: I came to CCC, I was out of high school and I was working and didn’t know that college would be an option for me. I was employed and my supervisor, my director, in about February after graduation, so about nine months later, he was trying to figure out why I wasn’t in school because all of their children were away to college and so, why not me? I said lot’s of things like “I don’t have enough money, because I don’t think it’s an option for me, I’ve heard people say that people like me don’t go to college,” that kinda thing. Anyway, he said to come up to Clackamas and learn how to go to college or don’t come back to work. That was how I took it. He might not have said that literally, but at 19, that’s how I took it. So, I came up here, and I sat in the parking lot for about 40 minutes trying to figure out every excuse possible about why I didn’t go in and what I could tell him- things that I knew he wouldn’t believe. And then I went into the Community Center which looked pretty similar to the Community Center we have now and I met someone who actually acted and said things that made it kind of normal that I would, of course be interested in attending college, why wouldn’t I? So I got what I needed when I came into a friendly environment, and I stayed. It took a lot to stay, so it’s not easy. Along the way, I met individuals at the college who I could rely on for good information and for encouragement.

TCP: How do you believe you have improved since starting your position?

JT: Well, I think that my time between the moment I believed there is something that is in our control as an institution that we could correct for students, so the stuff that’s in our control that gets in the way for students. I believe that not only am I quicker at helping others or just seeing it more globally if there’s something like that that’s happening, being clear in partnership with all of us that we’re going to correct it. I think that those are things that over time you learn, mostly because what we do doesn’t really change, but students’ needs and what they may need from us changes more so than sometimes we believe. Just being able to continually review that and hear from students, what’s working, and not working, leads to a quicker time of learning more about their needs and then what we need to do to address that. So, it’s really about identifying a concern that students have, and getting it addressed.

TCP: What are you going to miss the most about holding the position of president?

JT : I love graduation. It’s great. I love graduation. I like being here on campus, I like seeing students, I like asking them what they’re studying. I like asking them how’s it going, how are we treating you here at Clackamas, what else could we do better for you. I like those parts. Those parts mean a lot to me, because without Clackamas, I wouldn’t have had access to an education so I really get that for most of our students it may, in fact, be that same way. I like to make sure I stay in touch with that peace, that connection to why we’re here. That’s what I’ll miss.

JT: Yes. The strategic priorities are about academic relevance and innovation, guided pathways and college readiness, so those are pretty big goals, and those take more than one year. For this year, there are certain activities that we said we would be doing in order to make sure that we stay on track to accomplish those priorities, and we have met those. We’ve done grants that’s with our school partners for academic and college readiness out in our high schools, so our partnership office is working on that so we’ve been able to secure funds and keep that project moving. Some of our faculty members, last minute, especially in college readiness, jumped in to help some of our high schools who suddenly didn’t have a faculty member to teach in a program, a career technical program specifically, so that’s great. Guided pathways- we’ve got two things going we’ve got our navigate and we’re testing that system and students are piloting. Then we’re also addressing assessment and curriculum outcomes, so those are the things that are important for us to continue and so yes, we are meeting those goals.

TCP: What is a quality that you think the following president should have?

JT: I think the most important quality, and from what I’ve met of Dr. Cook so far, I think a genuine concern for the people we serve and a genuine understanding of our part in making things work for students and I believe he has that fundamentally. I think the board, and I think the whole entire process and I think the college people all believe that he can do a good job, I believe it too, I concur with them, and I think that he’ll do well for us in the future. I have every confidence in him.

TCP: What do you plan to do afterwards?

JT: Well afterwards, I have grandchildren, and I have a family and these jobs are fairly all-consuming and so I really do want to spend more time with them and go on a real camping trip for an extended period of time. So I like to camp and I like to fish, and right now my fishing excursions are twice a year, so I’d want to get up to maybe once a month to fish and play with the grandkids and I have some older ones, so watch their basketball games, watch their plays with my younger one. And then I do want to stay connected to the college through the foundation and participating on the foundation board to continue the good work the foundation’s doing to raise money for students.

TCP: What’s an interesting thing that most people don’t know about you?

JT: Well, I used to be a trick rider. I used to ride in rodeos and do stunts off of running horses when I was younger, ‘til I was about 20. I was hired, so it was kind of the intermission act in a rodeo. My family had horses, we rode horses and we rode in team roping events and barrel racing and stuff like that. It just so happened that a friend of mine was also a trick rider and we were partnering up, I got a saddle and started. It was fun, I will say though, that whenever it’s a difficult day at the college, like the legislature is not doing what I think it should be doing for us, I always think at least I’m not being drug by a horse in the mud. I had a brand new strap one time, and I was out in practice and checked all the equipment over and it was all fine, and then got out there and went off the back into what was called a “death drag” and one of the brand new straps, something somehow was weak and it snapped and I got drug by one leg. Fortunately, the horse stopped. They’re trained to dead run until they get to the pivot horse. Then I had to put my horse in the trailer, I was 16, and drive home and then I had what I would call hamburger, it was not good, and then I had a performance in two days.

TCP: Is there a message that you’d like to pass on to students here at CCC?

JT: It’s been a pleasure to serve you, students. Always know that at this institution, if there is something that is not going well for you, that we’re not doing to serve you, the next president or the board always wants to know, because we want to make things good for you.