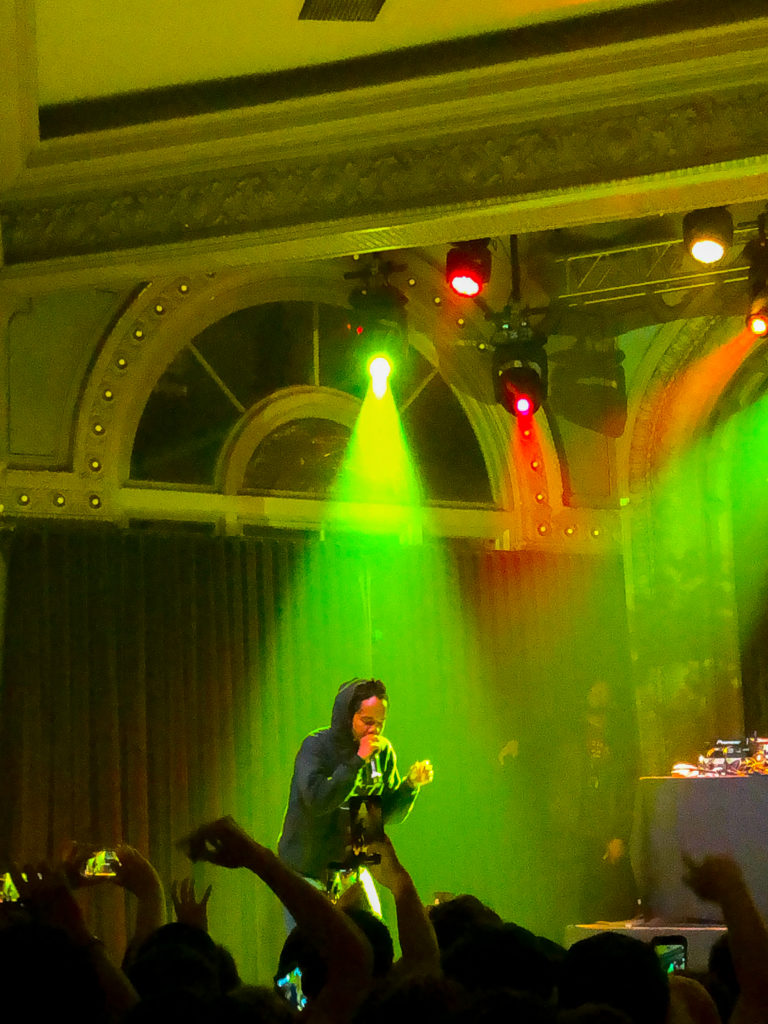 Departing the parking structure I could already feel the energy of the line wrapping around the Crystal Ballroom for the April 16 show. Even the grey clouds rolling in couldn’t have dampened these people’s day. Making my way to the back of the monolithic line I was treated to Earl Sweatshirt himself in front of his tour bus greeting fans. Finding my place in line, I began chatting with my neighbors. Several of them confessed their long time fandom of Odd Future, and more importantly Earl Sweatshirt. After clearing the security check, I took a brief look at the merch table. After purchasing a sweatshirt of my own, I made my way to the main stage — up the ballroom’s magnificent stairway I ascended, each step vibrating harder than the last.

Entering the room, I was greeted by a sea of bright-eyed fans — I’d never seen a more diverse display of style at a concert. Several of the patrons were repping the rappers’ OG brand, Odd Future. That didn’t stop a young couple in my section from vibing in some beige overalls. The one thing everyone at the show had in common was their huge smiles. Banger after banger pumped through the speakers as the DJ kept us amped for the acts to come.

Mike was the first member of Earl Sweatshirt and Friends to hit the stage. There was a roar as he opened up on stage. I’d never heard of him prior to this moment, but it felt like I’d been a fan my whole life. The crowd screamed out as he told his sad story under the eerie red lights silhouetting him; the look of Mike grabbing his face while telling us the tragedy of his own life felt like the perfect way to show the pain he’s endured. As quickly as he had hit the stage he faded out, leaving the crowd hungry for more.

Lil Nas’s Old Town Road came blaring out of the speakers, catching the whole room off guard – this huge tonal shift was met with shrieks of joy, as well as disdain. Next thing we knew, the stage went dark, save for one word shining bright, “Liv.E.” A mosh pit stirred as a dark figure in a cowboy hat slowly made her way on stage. Slowly the lights softened and the figure began singing her dark and seductive tune. While she swung around the stage brandishing her bright orange plastic revolver, I found myself entranced by her unique sound. With every song she performed there was a beat you could really feel your body grooving to. Everyone in the crowd softly swayed as she belted her bars to a somber background track; she arrived at her crescendo and sauntered offstage, while asking her fans if they wanted to “buy her a new set of teeth.”

While listening to the interim music from the show, you could feel the crowd slowly doing the math. If the two openers were finally done, then surely that meant Earl himself was the next to be hitting the stage. The excitement was mounting around me as each patron looked frantically for Earl Sweatshirt to come kill the show.

Kill it he did.

From the moment his hooded figure hit the stage there was a new type of energy buzzing around us — it was the feeling of hundreds of people finally seeing a man who meant so much, and accomplished so much with his music. The image that burned brightest in my mind is of Earl just before he dropped his first line of his hit “Chum.” He wore the world’s largest grin as he cast his eyes around the packed venue.

Earl’s opening song was met with a cascade of screams from loving fans; my chest was shaking, as his brooding voice matched with some of the loudest beats of the night roared out of the speakers. Everyone in the crowd was feeling the same way too, even the ones who hadn’t danced to any of the other performers were now nodding along to every word that came out of him. Track after track of the rapper’s set left the crowd on fire. Once the beat for Hive came on however, a deathly silence fell over the concert. This was the song I had been waiting for since I first entered the Crystal Ballroom. Listening to music on your iPhone is one thing, being able to enjoy rap as it was meant to be enjoyed, in the presence of others, sharing the reverberation of the notes in our chests, it felt like we had found our way home.

Sadly the night was brought down by some reckless fans who chose to fling their water over the crowd and toss the empty bottles at Earl. “If you want me to perform at 100 percent, knock that shit off,” he said. After a few problematic guests were removed, the show resumed full force with Liv.E still dancing in the background, her cowboy hat bobbing to the beat.

As the music faded and Earl looked out at the crowd for the last time, everyone was still vibing to an incredible show that ended too soon. Several concert goers still lingered as the lights came on, helping guide the way toward the exit. While making my way out of the maze-like tunnels under the Crystal Ballroom I listened to other attendees crooning over the amazing show we had just witnessed. While I passed the crowd of fans under the glowing Crystal sign outside the venue, I knew I had just enjoyed one of the greatest shows of my life.