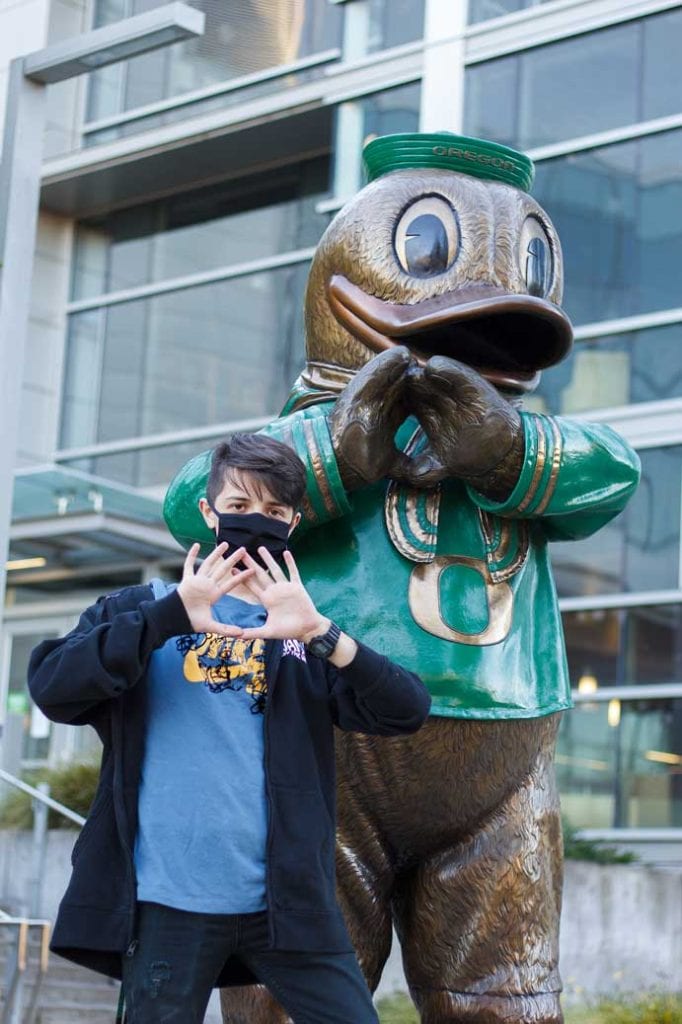 Zach Whitley poses with Yell ‘O (The Duck) on the U of O campus. Photo provided by Zach Whitley.

When I had planned to attend the University of Oregon for fall 2020, I had no idea that I’d be moving amidst a pandemic, or having entirely online classes. I had paid my last month of rent, and I had already put my deposit down for the dorm I was gonna be staying in. There was no turning back. Online classes have never been my idea of a good time, but I didn’t want to push earning my degree any further.

After a two-hour trip south, I arrived in Eugene. Despite being in the thick of COVID-19, all indications pointed otherwise; lots of people, less social distance, and care. One of the many requirements to on-campus living are weekly COVID-19 tests, and I began waiting in line for the first one required to move in. It’s a short line, and a shorter process – taking about 10 minutes. There’s no brain-tickling or blood involved in these tests, just a swab for each nostril.

Five weeks in, I’ve been dealing with difficulties that I didn’t think I’d have to worry about. I love the University of Oregon’s campus, but it’s clear that they didn’t prepare enough for on-campus students, and especially the new rules brought along by COVID-19.

As a student, there’s so much confusion around nearly everything, and it’s especially confusing with a lack of seriousness towards COVID-19. While the university has provided numerous supplies, disinfectants, masks and plexiglass shields, they don’t enforce nearly any of the rules that they set. It’s simple things: In almost every dining hall, you will find large groups of students within six feet of each other; anytime past 9 p.m., it’s normal to see large, unmasked groups of 20 to 30 students outside. Staff aren’t excluded from the lack of seriousness either, as they tend to break elevator limit rules and choose to not enforce any rules. In terms of confusion, it’s hard to tell what I’m allowed to do and what I’m not, which makes it kind of prison-like.

In terms of my own personal experience, I’ve never enjoyed online classes, and this term is somewhat cementing that belief for me. At the beginning of the term, almost every one of my professors released an announcement saying the same general statement: “With all the trouble in the world, we understand your struggles, and we’re here for you.” In my eyes, this statement has been nothing less than hypocritical. While I love my professors, these are the same people who are enforcing strict attendance and late work policies, and nearly no leniency for technological issues. Since this is my first year at UO, I can’t tell if there’s more homework and expectations because everything is online, or that it’s just a fluke.

Despite the shared camaraderie of stressful online classes, making friends has been a struggle, and I would be hopeless if it weren’t for my roommate, Lexi, who I know from CCC. We’ve built up a schedule to avoid dining hall traffic, and we’ve been consistently going to the UO Rec Center, which is probably my favorite thing that my tuition is paying for.

I should clarify – I say all of these bad things, but I’m not having a terrible experience. The campus is beautiful during fall, I’ve had no issues immersing myself with student groups, and I love all my classes and professors. My complaints are few – but mighty – as I’d like to say. It hasn’t been the experience I hoped for nor expected, but it’s what I got. 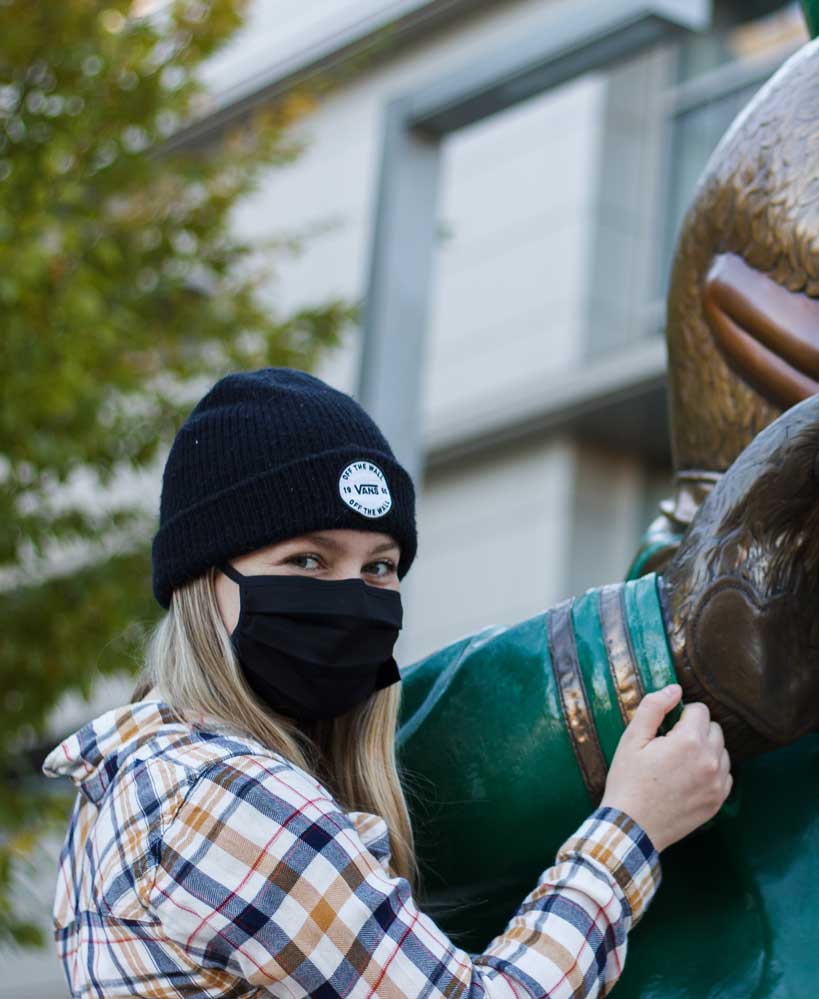 Lexis Shull poses with Yell ‘O (The Duck) on the U of O campus. Photo provided by Lexis Shull.

Zoom University: according to Urban Dictionary, “Refers to the online school system that started during COVID-19, which mostly took place on the Zoom video conferencing platform.”

I knew that I was headed towards a school that would largely be held over a computer screen, but I blundered ahead anyways because I had no other options.

Upon setting foot at the University of Oregon for the first time, I was met with an intimidatingly long line of students awaiting their first COVID test. The school required that all students who were to live on campus get tested a day prior to their move in time and also in the subsequent weeks ahead.

We were all tested using a cotton swab that we handle ourselves. Thankfully, no one had to poke and probe at my brain. I completed the test and left campus as I was instructed. The next morning, I had yet to receive my test results. I called the school and was told that my test had been invalidated and that I had to go in to get a new one today. That meant I had to wait another day before I could move in. I asked the lady on the phone if UO was planning on paying for my extra night of housing, to which she replied, “I don’t know.” Sounds like information you should know, in my opinion.

Things got better after I was finally able to move in. I am living in Global Scholars Hall, in a two-person suite where I have a single room and a bathroom I share with my roommate and friend, Zach.

The dining halls have been kind of a disaster, as they are rather small, located on the bottom floors of select residence halls. This means that during typical eating hours such as noon and 6 p.m., the lines are excessively long. I have reached a point of existential dread anytime I get hungry during these times of the day for fear of these atrocious lines.

However, one of the most important aspects of living on campus – and the reason I chose to – is the ability to be social. Over the last few weeks, I have come to the conclusion that this is impossible during a pandemic. The hall I live in could be compared to a ghost town; you never see anyone in it. The dining halls all over campus are filled with students just trying to get food and go back to their dorms.

Most of all, the remotely-held classes are dry because of the surplus of students in them, turning the class into a mundane lecture with no student-to-student interactions a majority of the time. At least I don’t have to get out of bed until 15 minutes before class starts.

Do I regret coming to the University of Oregon during a pandemic? No, because it was the logical next step in my academic career. But is it the college experience I was hoping for? Absolutely not.