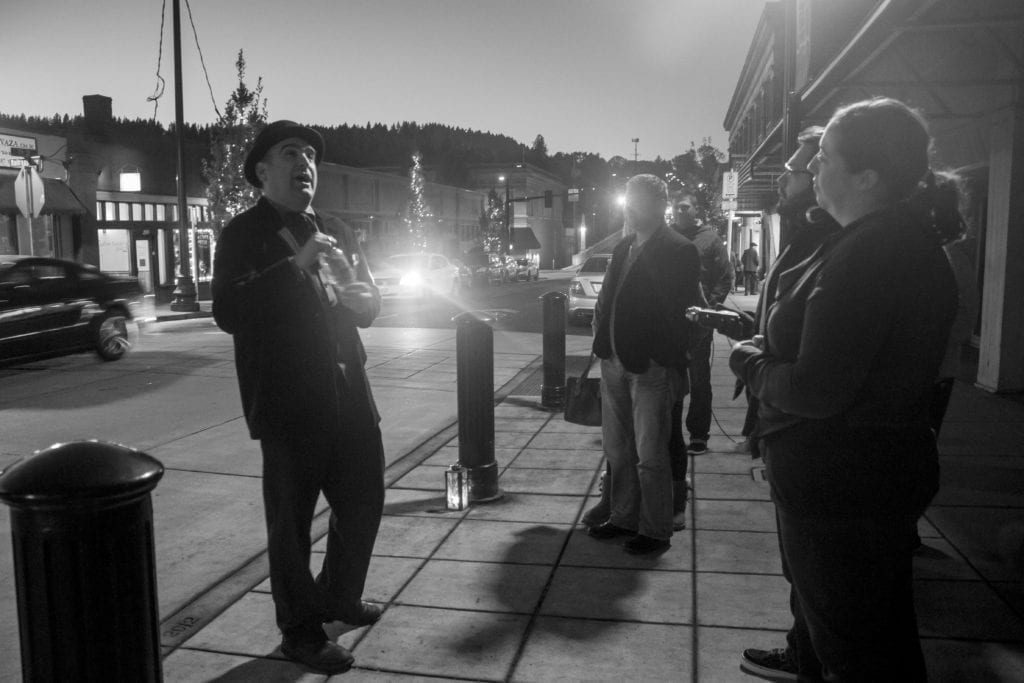 If you’ve ever wondered if your town is haunted or even just want to know its history, this is the tour to experience.

On Friday, Oct. 13, people gathered at the Oregon City elevator waiting for the Northwest Ghost Tour to begin. Rocky Smith is known as a local historian, a paranormal investigator and the tour guide.

“I expect to see some ghosts; I’ll be disappointed if I don’t see any ghosts,” said Kobe Williams, who was one of the people waiting at the elevator. “I haven’t heard that Oregon City is haunted or anything, but you never know.”

“It’s Friday the 13th, so I’m just doing it to get spooky,” Katie Dalrymple said.

The tour began across the street with some interesting general history before moving into the major hot spots.

According to Smith, in Oregon City, Dr. John McLoughlin started it all by building houses, stores and even by helping to found the town.

Before leaving the view of the elevator, the story of Sarah Chase was told. She was a mansion owner that despised the elevator. It is said that she still stands at the top in the skybox to yell at those who use it because of its position on her land.

After walking down Seventh Street towards Main, you hear the story of a little red-haired boy.

It’s thought that he played at the river, got sick and died; now, he wanders around town laughing. Recently, the stories changed and inconclusive information has arisen.

Main Street is full of little snippets of the town’s history, from buildings up on the hill such as the Barclay House and the McLoughlin House.

In the second stop, the Bank of Commerce doors’ lock and unlock on their own. Stories from people are told that items disappear and reappear from different places. Maizee Mae’s Antiques and Treasures, which was once a police station, comes next. Its twin buildings are now in the historic registrar and cannot be taken down.

The tour continues past Pioneer Pub, Singer Falls, Ruuds Jewelers, Weinhard Grill and McAnulty N Barry’s. These stops lead to the most haunted spot on the tour due to its high frequency of activity, Coffee Rush. The site of Coffee Rush’s parking lot was originally a house that had burnt down. A car dealership was built over the lot and it also burnt down.

Continuing on the tour, one could see the site that once was the Liberty Theater. After the Liberty Theater was taken down, they built small window boxes in the ground that can be seen lit up during the evenings except for the box dedicated to the Liberty Theatre, which has never had power to it and sits black in the night.

The tour ends with two dark and gruesome places. First, it’s a small alcove under Oregon 99, next to the river where faces can be seen looking up at you and things can be thrown.

The final place is a pedestrian tunnel located on Railroad Avenue that goes under Oregon 99. The tunnel gives the feelings of heaviness and can make you dizzy. It is the site of many deaths originating with the hanging of five Natives. Paranormal investigators believe there is a negative energy in that area.

Smith believes he is a sensitive. “I have the ability to pick up things, I think we all do,” said Smith. “I think we usually just write it off as a coincidence that we see things or feel things.” A sensitive means they can feel negative or positive energy and feel the emotions of the paranormal.

The Northwest Ghost Tours, as well as other special events, run every year but only for a couple months and tickets can be bought online.