Headbangin’ at the Roseland 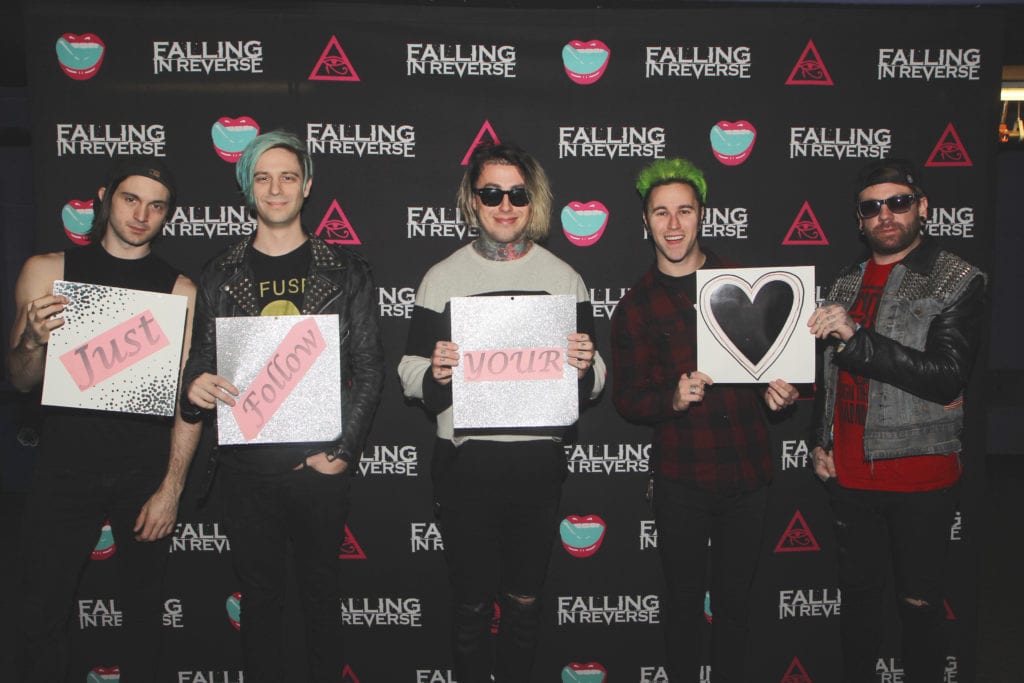 Falling In Reverse headlines “The End is Here” tour. One of their final stops was at the Roseland Theater in Portland on Feb 9.

A mixture of pop punk, emo and metal surrounded the Roseland Theater on Feb. 9 just minutes after the doors opened.

Dead Girls Academy started playing the opening for the 2017 “The End is Here” tour. This is common, but when I first walked in, just by observation I had the feeling the band wasn’t going to be great.

I was actually surprised when I sat down and saw them perform. They were fun to watch live and they were bringing back the 2007 emo hair, which I am behind 100 percent.

Dangerkids caught me by surprise too. I had never heard of them before and was excited to see they had a girl drummer. Other than bringing girl power to this tour, I think she added some spunk to the band as well.

I also enjoyed that they had a screamer and a singer. This band seemed very sophisticated for only being an opener and I’m excited to see what they come up with when they come to Portland next.

I first saw Issues live at Warped Tour last summer, and they killed it on an outdoor stage, so I was excited to see them perform on a smaller, more intimate indoor stage.

Like Dangerkids, they have a screamer and a singer. Their band is diverse, just like their sound which is a mixture of rock, metal and Chinese guitar with a talented singer and some rapping in the mix. I was disappointed that they didn’t play some of their harder, older songs but they were limited on time considering how many bands were performing.

Motionless In White absolutely killed it. I’ve heard of them before and had seen them perform at Warped Tour from afar but didn’t pay too much attention, which I will not do again.

Their sound is haunting and dark like Marilyn Manson went punk, and the band members reflect that. Their set was something you would see in a 90s Halloween movie with jack-o-lanterns and a spooky house in the background.

During each song, a woman would be dressed up in a cheerleader outfit or a skeleton dress acting out what they were singing about or even handing out candy. Sometimes, a scary man with a gigantic pumpkin head would make an appearance as well. They put on an outstanding show and I will admit that don’t think I have ever head-banged so hard in my life.

Falling In Reverse was headlining the tour. I will admit, I like their music mainly because I like Ronnie Radke’s spunky attitude and catchy lyrics.

Last time, I was disappointed when I saw them perform and thought I would give them another chance. Unfortunately, Falling In Reverse sounds good live but their stage is bare and Ronnie has a tendency to only stay in one spot while performing.

For the background, all they had were lights that looked like they were taken from an old arcade from the 80s, and the picture wasn’t even clear. The one thing that absolutely bothered me was that between each song they would turn off the lights and make you wait a minute for the next one. I started paying attention to what they were doing in between songs and all they did was stand in the back and every once in a while, make a guitar change. If they didn’t pause each time they could’ve easily added a couple more songs onto the set list.

Their set list wasn’t bad at all though. They played their most popular songs, along with some old ones and new ones. I spoke to a man named Keegan and we agreed that if Motionless In White headlined the tour, it would probably get better reviews.

Overall, I absolutely enjoyed myself and discovered new bands to listen to and watch out for.