‘I am a Blackstar’

David Bowie came from outer space. Since his ascent to rock stardom with his call to astronaut Major Tom through his arrival to earth as Ziggy Stardust and his alien Thomas Jerome Newton, he has told us tales of the beyond.

Perhaps that’s the only constant in a career branded by metamorphosis and change. Bowie started in rock, striking gold with hits from his self-titled album and “Hunky Dory.” He had essentially perfected the form of rock as art by 1972’s “Ziggy Stardust and the Spiders from Mars.”

From there Bowie experimented with other forms. 1974’s “Diamond Dogs” found him working with the rock opera/concept album formats and using funk textures. In 1977 Bowie stripped down the rock elements to near nothing and rebuilt his sound with electronic instruments.

“Blackstar” is a new evolution for Bowie. The eponymous title track and first single of the album is 10 minutes long. It opens in a dark Phrygian, a kind of minor key that translates anxiety and evil. Themes of alienation and fear appear. Bowie howls out the setting: “In the villa of Ormen stands a solitary candle, On the day of execution, only women kneel and smile.” Bowie wastes no time in establishing the dark imagery of “Blackstar” with the lone candle, the execution and the contradictory actions of the women: kneeling and smiling.

The song evolves. It moves into a more major key as the clouds suddenly break. “Something happened on the day he died, spirit rose a metre and stepped aside, somebody else took his place, and bravely cried: I’m a blackstar, I’m a blackstar.” The protagonist of the song has evolved through death into both a new musical key and the new emotion of bravery.

Bowie uses themes of darkness and anxiety better than any of his contemporaries with the only possible competition being Radiohead, a band his influence paved the way for.

“Sue (Or In Season of Crime)” could have come off a Radiohead release circa “Kid A.” Pulsing guitar enters in one of the closest moments to straight ahead rock on the album.

The following song “Girl Loves Me” has a vocal sample reminiscent of Idioteque off Radiohead’s Kid A. In “Girl Loves Me” Bowie yelps “Where the fuck did Monday go?” over and over between verses of “A Clockwork Orange” slang. Borrowing Alex Burgess’ vernacular from “A Clockwork Orange” is something Bowie has done before (“Hey droogie, don’t crash here” from Suffragette City); here it’s with foreboding intent.

What if Bowie meant the phrase “I’m a Blackstar” more literally than would be interpreted? Unlikely, yes. On a thematic level though, and considering that he released the album on his birthday, there are elements of Bowie’s artistry that are all wrapped up in the form of the album.

The dark, pulsing textures at the introduction of the song “Blackstar” are reminiscent of 1977’s “Low”. Saxophones come in, echoing “Diamond Dogs.” The themes of space and stars echo “Ziggy Stardust.” It moves through changes over and over again.

The album has a dramatic showstopper a la “Five Years” in “Dollar Days.” There are the same saxophones that played on “Suffragette City’s” chorus throughout. He breaks down the classic verse-chorus-verse form on nearly every song, much like jazz and neoclassicist era Bowie. So much of the artist that is Bowie is wrapped up in this work.

If Bowie died tomorrow, his epitaph should simply read “✭ .”

I wrote all this as Bowie lay dying. I had no idea that I would wake up to the a message from my dad telling me that the legend had died. Funny that I surmised there was an epitaph hidden in his album. Surreal that the sentence I had ended my simple editorial with was closer to a prophecy.

Obviously I am not a prophet. I am a believer in the legend though. I listened to “Changes” hundreds of times in middle school, knowing that change was upon me. I wrote my own rock opera because I was so inspired by “Ziggy Stardust” and The Who’s “Tommy.” I’ve made a poor imitator of the genius that now was.

In the wake of his death the outpouring of love from fans has been incalculable. Social media has exploded. In the morning my girlfriend painted my face like Ziggy Stardust; I paraded around CCC with the lightning bolt from the cover of “Aladdin Sane” gracing my face.

With Bowie’s passing I now feel that the album is even better. His last work is a masterpiece. We’re lucky to have had David Bowie, the genius, the diamond dog, the hero. 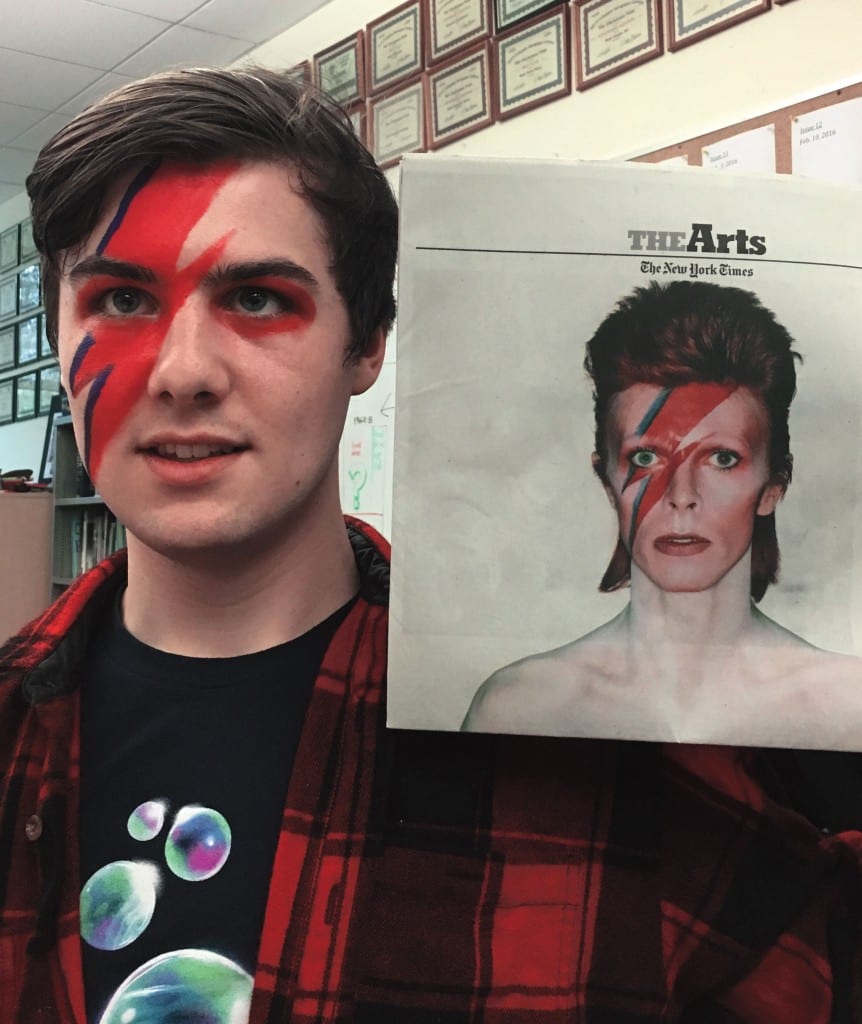