Improv, stand-up, one act — what more could one want?

On Nov. 10, I was able to attend the student showcase held in Niemeyer. This is the first time the theater has been open to the public in more than a year, and entering the theater — it certainly felt like it. Stepping into the auditorium was like experiencing something unusual, but familiar. I can only imagine it was the same for the rest of the about 30 audience members present. I think it’s fair to say that we didn’t know what to expect going in, but the show did not disappoint.

The night was filled with laughs. Starting with a clever one act about two friends at a cafe, both of them trying to fit in with the culture of Philadelphia. The jokes were mature, and the dynamic between the characters worked so well that I’d watch it again.

There was then a stand-up portion of the show, which had enough variety to satisfy anyone in the crowd. From impersonations of celebrities singing famous songs, to a story about driving lessons with grandparents, the entire affair was never dull. 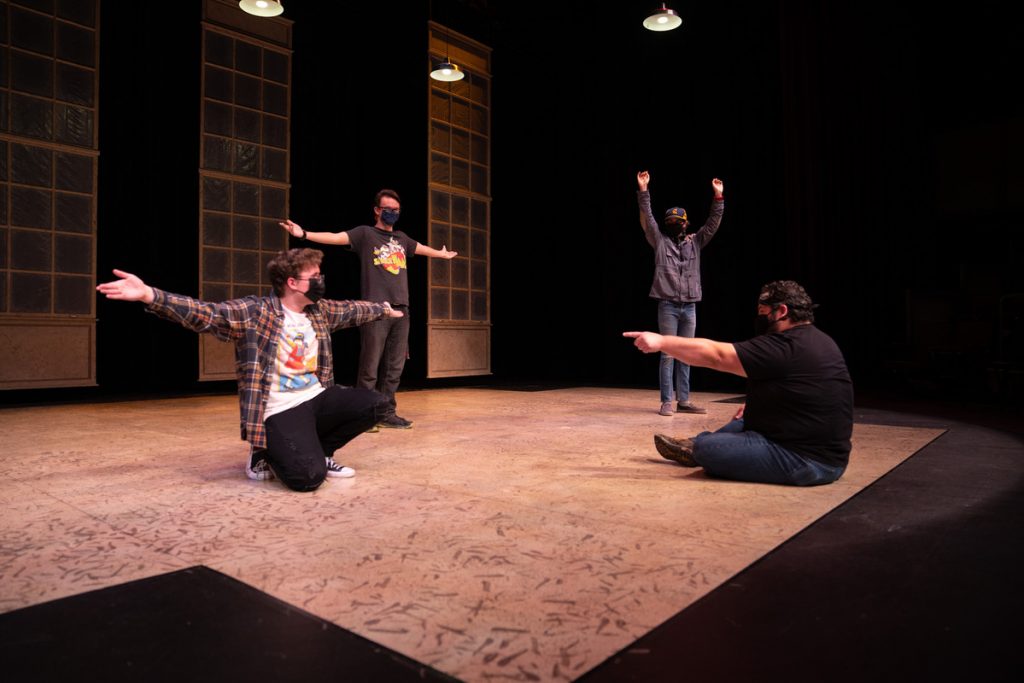 The Student Showcase was held on November 10. Photo by Joseph Lohmolder.

Finally, there was the improv section of the show, which seemed like a culmination of everything. Bits like: Gibberish interpreter, and complaint department were quite the highlights. The whole production felt consistent in its presentation.

One of the more interesting aspects of the show came from faculty member Chris Whitten. Between each transition of the segments, Whitten himself would appear on stage, and provide comedic commentary purely for the audience. Most of it was pertaining to the cycle of the pandemic, and the toll it has had on the theater, while also giving a certain amount of optimism about the show. One thing I caught was slight cynicism in Whitten’s dialogue, which I found amusing by how fitting it was, all things considered.

Before watching the event, one thought that kept crossing my mind – how the actors prepared for this? Of course, I had some ideas, but I wanted to know more. I was lucky enough to actually catch a brief interview with the cast ahead of time. When I met them, they seemed so eager, and expressed how much this event meant to them.

As I started posing my questions on why students were excited to be back performing in person, I was given many different responses. Some were very sarcastic. Such as one response from Grant Christnacht, in which he simply said “It’s COVID times, and I wanted to make friends.”

All their answers were very sincere. Because for them, this was such a relief. As Tegan Richards put it “Especially at the time of COVID, having an outlet involves lots of human interaction. Lots of humor. Lots of goofing off is very great.”

However, I think the response that stuck out to me personally came from Jared Atkinson. In which he said “Very much helps everybody to remember. That there are real people, and it actually feels like, you know, I’m living an actual life. Rather than I mean, other than already sitting in my room a lot. Like it’s not only that anymore, so it just kind of feels like a life again.”

After hearing these responses, my mentality changed a bit, and watching the show, that sentiment never left. I could tell that the entire crew put a lot of work into this production, even with the show being simplistic, there was still commitment. While I did not find every moment as entertaining as some of the audience probably did, I was still amused as is. Nevertheless, I think the entire production succeeded in making an impression for welcoming audiences back to the theater.

Dalton Elliott started on The Clackamas Print in the fall term of 2021 and works as a staff writer and photographer. Elliott was raised in Happy Valley, Oregon, and came to Clackamas Community College in fall 2018 in pursuit of degree through the Digital Media Communications program. He hopes to one day become a professional filmmaker and have his films appear on the big screen. Dalton enjoys spending his time writing scripts, and is a huge movie fan he also considers him a YouTube junkie and enjoys watching the YouTube channel Screened.