Stellar: the only word that was going through my mind while I was watching this  lm. A futuristic masterpiece with something for every kind of movie-goer. Whether you came to see a moving family story, or a thrilling adventure into the stars, you will not be disappointed.

Director Christopher Nolan delivered yet another exciting, thought-provoking and mind-bending piece of art. Many people see his movies based solely off the “from Christopher Nolan” line in previews, with this now being the 10th movie he has directed along with blockbuster titles such as The Prestige, Inception and  The Dark Knight series.

Interstellar goes right alongside those other  films, with a perfectly in-tune score from Nolan’s right hand music man Hans Zimmer, and visuals of space that had me questioning where exactly they went to  film this movie.

Nolan is notorious for his attention to detail, and he went farther than any other director has gone before. No, he didn’t actually go to space, but he did work closely with astrophysicists and scientists to make sure his movie was not “Hollywood” and was actually accurate.  That attention to detail paid off for Nolan as that work led to his crew being able to produce images of space, including a wormhole and black hole, which have been a mystery for scientists.

It also has his usual star-packed cast: Matthew McConaughey and Anne Hathaway in lead roles, Casey Affleck, John Lithgow, Jessica Chastain (from Zero Dark  Thirty), Topher Grace and of course, what Nolan  film is complete without a Michael Caine supporting role. Unfortunately for the audience, McConaughey does not go shirtless.

However, he does deliver a powerful and inspiring performance that made me believe if we ever do we need a hero to save the planet, it should be him. McConaughey plays Cooper, a farmer and ex-NASA pilot who is chosen to lead a heroic mission. Hathaway plays his co-pilot Dr. Brand. The actors play just as intricate of a role as any other aspect of this movie. Though there may not be any Oscar winners for acting in Interstellar, that’s not to say that the performance wouldn’t move you to tears or make you applaud.

Hathaway is an excellent counterpart to McConaughey, adding wit and humor to his level- headed fatherly manner. Chastain returns to the big screen with a similar role as her last big one: the  fiery, stubborn leader who  finds a way when there doesn’t seem to be one. Caine is his usual sage self, guiding and advising the others through an unprecedented, difficult situation.

Nolan teamed with his brother Jonathan Nolan to come up with a plot that should scare anyone who knows anything about humanity’s environmental impact. In a near-future Earth, mankind struggles to produce food during a seemingly second Dust Bowl era. This was yet another aspect where Nolan was meticulous with his details.

The story centers around Cooper’s decision: leave Earth and his family to find a new habitable planet, or stay with his loved ones and try to survive. Interstellar is a long movie, clocking in at just under three hours, but every minute is critical and the pace is anything but slow. The Nolan brothers took a realistic plot and made it an amazing story that I wouldn’t have wanted portrayed any other way. 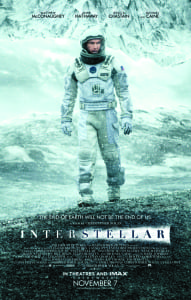