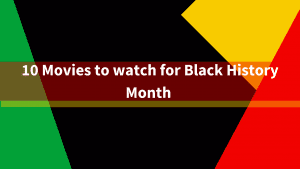 The month of February has been officially declared Black History Month in the U.S. since 1976. Art by: Hailey Reeves

Any list of must watch movies will be imperfect in nature. There are simply too many movies to choose from and no two people have the same taste. That is no less true when looking for movies on Black history. I have tried to create a list that covers the full spectrum of American history, from slavery to modern times, and focuses on the Black experience or incidents or events important for all Americans to know. It is my hope that this list serves as a springboard for further exploration of our American history.

The film “Amistad” is often touted as Djimon Hounsou’s first film. Although it was the first film to truly introduce him to American audiences his true first film had a much lower budget. Both movies depict slavery in early America and, hence, find themselves in competition for the top spot, “Ill Gotten Gains” is a grittier, more graphic depiction of the slave trade. If you prefer a better visual production and lots of monologs by Anthony Hopkins and Matthew McConaughey on the equality of man, an admittedly inspired performance by Hounsou and the wonderful addition of Morgan Freeman then Amistad is more your cup of tea.

This film tells the story of the 54th Massachusetts, the first regiment of all Black soldiers in the United States. The film “introduces” Denzel Washington. In reality, Washington had laid down six films prior to his exposure in Glory. Although all of those movies are worth a watch, “Glory” takes place during the American Civil War and takes our second spot in historical order.

Preserved in the United States National Film Registry which preserves films it sees as culturally, historically or aesthetically significant, “Imitation of Life” is one of the first films to suggest there may be a race problem in America. Essentially the story of two single mothers, one white, one black, raising daughters. The Black woman’s idea makes the white woman rich, and the Black woman’s daughter passes herself off as white. Besides dealing with race issues directly by talking about them, the film also did something else, it provided us a time capsule showing exactly what life was like when the film was made.

The Black master sergeant of a segregated company of Black soldiers is murdered in the Jim Crow South near the end of World War II and a Black Army officer is sent to investigate, something the white officers on base are less than thrilled about. The film stars a mostly Black cast and brings to light many of the things Black soldiers had to deal with on a daily basis. Pay special attention to the times when either the Gullah or Geechee are mentioned and if you don’t know what those are then you have an extra little mystery to explore.

Staying with World War II we’ll take a look at the war from a pilot’s perspective – the pilots of the 332nd, the first Black fighter pilots in the US (Eugene Bollard should probably be considered the first American fighter pilot but he flew for France.)

Ever wonder why the Black community seems resistant to government medical programs? Well, in 1939 the United States Public Health Service initiated a study called “Tuskegee Study of Untreated Syphilis in the Negro Male.” During this study the U.S. Government took a group of Black men who had syphilis and pretended to treat them for the disease when, in reality, they were watching how the disease progressed. The study ended in 1972. Miss Evers’ Boys tells this story.

A white girl brings her Black fiancé home to meet her middle class, liberal, white parents. Sidney Poitier; first Black actor to win an Oscar, also won a grammy and two Golden Globes as well as a BAFA, AFI lifetime achievement award, Kennedy Center Honor, Presidential Medal of Freedom and was awarded the title of honorary Knight Commander of the Order of the British Empire. This list had to have Sidney Poitier on it and there were so many to choose from. A personal favorite, “To Sir, With Love,” is set in London which simply wouldn’t do for a list such as this. “Guess Who’s Coming to Dinner” provides another, later, time capsule example of what life was like at the time and the contrast between “Imitation of Life” and “Guess Who’s Coming to Dinner” show that, at least in some ways, progress was made in the intervening years.

Not only the story of Malcolm X but also the story of the early years of the Nation of Islam and why Malcolm eventually broke with them.

A buddy film starring one of the greatest Black American comics of any generation and directed by Sidney Poitier. This film leaves the heaviness behind and focuses on the comedy because it’s important to remember that life can bring smiles too.

Let’s be honest, “Jungle Fever” is far from Spike Lee’s best film, but even a bad film from Lee is better than the best bad film from pretty much anyone else. The real beauty of this entry in the list is how it caps off the triptych which includes “Imitation of Life,” “Guess Who’s Coming to Dinner,” and this film, “Jungle Fever.” Three movies, roughly every 30 years, showing clearly the attitudes of the time reflected in the film itself. Lee would have had little opportunity to direct films in the 1930s. Though not an impossible task, one only need look to Oscar Micheaux to see that, the opportunities were far fewer. Even in the 60’s Lee would not have had an easy time becoming a filmmaker. “Jungle Fever,” then, represents a jump in story telling where Black voices are in more control of their own stories.