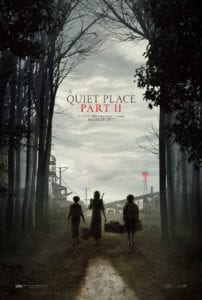 The film poster for “A Quiet Place Part II.”

Going into “A Quiet Place Part 2,” I wasn’t sure what to expect. Part of me didn’t want there to be a sequel to the hit original film. However, I was pleasantly surprised that this film did not fall victim to the classic blunders that typically ruin follow-up films.

SPOILER ALERT: I will discuss major plot points from the first film, but I will only give a general summary of part 2. I will try to only discuss parts that are shown in the trailer.

For those who haven’t seen it, A Quiet Place is about a family trying to survive after an alien race invades Earth. The characters are forced to be as quiet as possible because the aliens that are attacking them, while blind, have an incredible sense of hearing. The movie is directed and starred by John Krasinski who plays the father of the Abbott family, and his wife, who is played by Emily Blunt. Interestingly, the two are married in the real world as well, which adds a fun dynamic to the film.

The movie follows the Abbott family as they try to navigate a world in which they cannot make a sound, lest they be eaten by horrifying creatures. Extreme precautions are taken so that the family is always as silent as humanly possible. We are shown the dangers of making noise early in the film when one of the Abbott children accidentally sets off a musical toy, bringing the attention of one of the aliens and leading to the boy being eaten.

Following this event, we watch as the family tries to cope, not only with the new world they live in, but with the loss of their youngest.  There is a substantial time jump in the movie following this event, and now Evelyn Abbott (Emily Blunt) is pregnant with another child. The rest of the film is dedicated to the family preparing for a baby in a world where something as small as a sneeze, let alone crying, can mean certain death. Needless to say, plans go awry and John Krasinski’s character, Lee, decides to sacrifice himself so that his family can survive. Through his sacrifice the audience learns the overarching message of the film: that even in horrible times, life can go on. Lee’s ultimate sacrifice allows for his children to live on (and for the audience to get an inevitable sequel).

A Quiet Place Part 2 picks up right after the events of the first movie and builds off of it well. The Abbott family now has a method of fighting back against the aliens. One of the Abbot children, Regan (played by Milicent Simmonds), uses the feedback from her hearing aid to mess with the aliens’ hearing, leaving them vulnerable to attacks. Although the characters in Part 2 now have a way to fight back, they are in no means safe.The Abbotts are forced to flee their home as they watch it go up in flames, which gives the audience their first clue that there is no longer anywhere for the family to go that is safe. For the rest of the movie, danger will be lurking around every corner, creating a constant sense of impending doom.

Something I really appreciate about “A Quiet Place Part 2” is that it gives the audience answers to questions that were never addressed in the first film. The first few minutes of the film are set in a flashback, the day the aliens arrive on Earth to be exact. We are shown the absolute havoc that the aliens cause, which contextualizes the fear and extreme precautions the characters exhibit in part 1. These traits are not absent in part 2; rather, they are turned up to the max.

The duty of a sequel is to take what made the first film great, and add a twist. Where some sequels fail is they change too much and lose what made people enjoy the original. Sometimes they don’t change enough in the second movie, making it indistinguishable from the first. A Quiet Place part 1 mastered the art of suspense and foreshadowing dramatic events. The audience is made to be constantly on edge, and aware of the many noisy obstacles that the protagonists may end up encountering throughout the film. If you see something prone to making noise in this movie, it most likely will in the worst way possible.

A Quiet Place Part 2 succeeds in not only being unique from part 1, but also stays true to the themes and premises that drew the audience’s interest in the first place. This movie features more untimely noises, more monsters, and more moments where your breath will be taken away.