The Secrets of Dumbledore worth seeing

“Fantastic Beasts: The Secrets of Dumbledore” is a PG-13 movie, released in the U.S. on April 15 that you don’t want to miss. The scenes will keep you on your toes with great acting, amazing storyline, impressive CGI, and even better music. The creators of the film put a lot of effort into it and it shows. Behind a bucket of popcorn and a two-liter there was nothing that was going to pull us out of that seat early.

The music alone was worth attending in theaters.. As the motion picture opens and sends us cascading across scenery, the first thing we notice is falling deeply into a full quartet of partially-altered Harry Potter music. The music went through the entire film, going beyond complementing the cinematography and sparking passionate life of Its own.

Without spoiling much of anything, some well spent screen time was placed on the intro. While the show consists of under 17 total minutes of action, some of these best minutes come right off the bat. The opening scene started the movie off with a bang and got you wondering how the film was going to end. 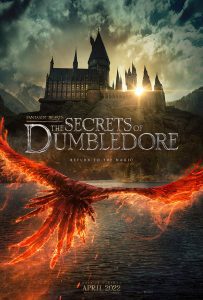 As of 2 May 2022, ‘Fantastic Beasts: The Secrets of Dumbledore’ has grossed $80.2 million in the United States.

Another great moment was the briefcase scene. This was the climax to the movie, and it hit really hard. It was set up wonderfully and pressed the whole movie together. It had action, emotion and suspense all in one. It is definitely worth watching the movie for just this one moment.

Some more moments that brought this movie together were those filled with romance between Queenie and Jacob. Throughout the movie, they hardly got to see each other, which contrasted well with the other movies. When they did get to see each other, it wasn’t for long and the toll it took on Jacob really bled through. This made the romantic scenes between them even more impactful. From one end with Queenie leaving mysteriously, and the other; her showing up in the place you least hoped for, Jacob manages to persuade her over in the most unlikely of places and in the end finds himself deepening their relationship in the way many of you would imagine.

Even Niffler and Bowtruckle find themselves in a tight corner.

After slipping out from their cage, we watch in slow motion as the two of them take a 10-foot dive; Niffler appears to be reaching for the Bowtruckle, but the only thing in that Nifflers hand when they touched down, was his gold coin.

Besides the wonderful scenes and acting, the CGI, or computer generated imagery, in this movie were impressive. From the beasts to the magic, even the acting around the CGI fit well together.

Some beasts that will strike your attention are the Wyvern, Manicores and the Qilin. These aren’t the regular beasts that hang around Newt Schamander, like the Niffler and Bowtruckle. But their beauty, however, is striking and impressive. Just being computer generated is special, but being able to make the audience feel emotion towards them is awe-inspiring.

Most of the action scenes had CGI effects from the wizards and witches using their wands. It added to it, and improved it. Speaking of the people who use said magic, the actors who had to work around the simulated magic did an incredible job. They were able to perform without seeing what they were doing in a sense.

The actor, Jessica Williams, who played Eulalie Hicks in another “Fantastic Beasts” movie, “Crimes Of Grindelwald,” was able to play a bigger part in this movie. Seeing more of her was great; she definitely added a lot to the scenes she was in. However, compared to the other characters, she stood out. She was very boisterous and whimsical, while everyone else seemed more toned down and more serious.

Just like Jessica Williams, Callum Turner, as Theseus Scamander, and William Nadylam, who played Yusuf Kama, were also in another “Fantastic Beasts” movie. In the most recent movie though, they both were just kind of in and out, doing only one important thing. The way they both act isn’t bad, but their characters just weren’t super intriguing.

It was nice seeing diversity in the film, but the newer characters didn’t have much depth. Plot wise, it seemed like they were given just enough personality so that the story would stick, instead of written as thoroughly, thought-out and fleshed-out characters.

On a more positive note, Jude Law, who played Albus Dumbledore, helped to carry this huge emotional baggage through the entire film. It’s certainly something worth experiencing.

Similarly, Richard Coyle pulled off an Aberforth Dumbledore, Albus’ brother, incredibly well. He was withdrawn, but showed emotion when it mattered. It was neat seeing the difference between the two brothers. Additionally, Dan Fogler, whose character is Jacob Kowalski,  was impressive as always. The way he brought a third move to life with his talent was amazing to see. To say boldly, you will be stricken to wonder with his acting, as well as his character. He always adds something good to scenes, a comic relief but not obnoxious.

Alison Sudol, although not as prominent as she was in other films, single handedly gave the audience just the right amount of spice and romance for a “Fantastic Beasts and Where to Find Them” finale.