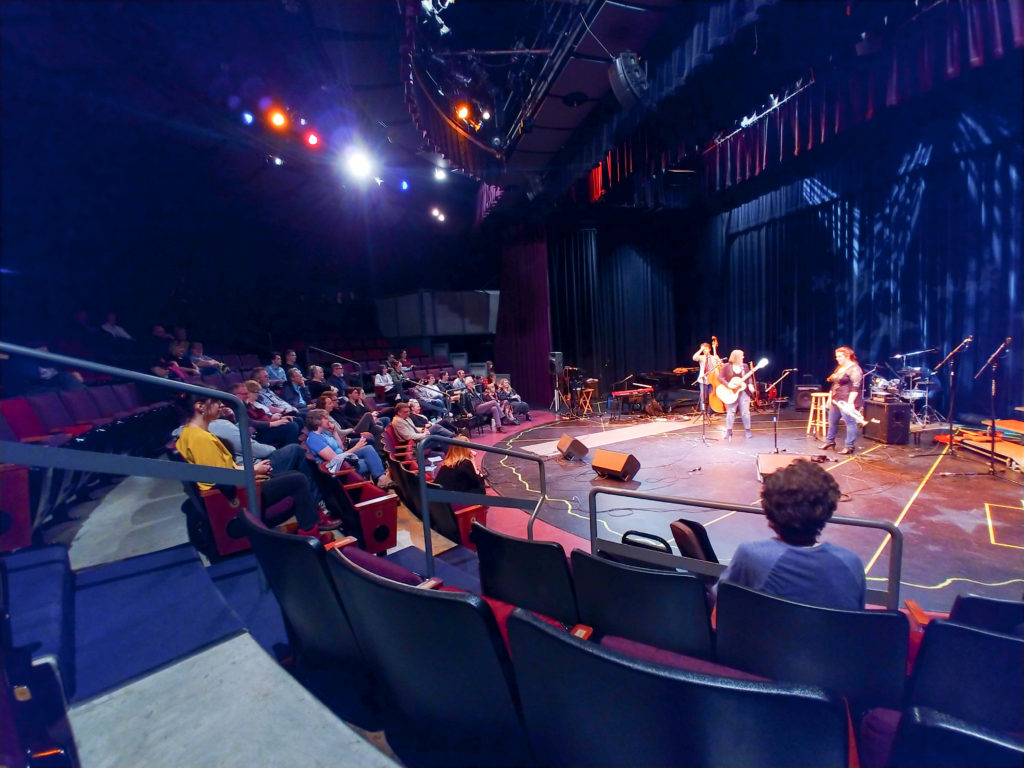 The Music Performance Technology Festival was held in the Osterman Theatre at the Oregon City campus on April 20, featuring artists from middle school to middle age. The performers consisted of the Contemporary Music Ensemble, the three student winners from the Garage Band Festival and a group of special guests.

Inside the Osterman Theatre doors, students prepared their instruments for the show; music played in the background to hype the crowd up for the performance.

CCC’s Contemporary Music Ensemble started with Fleetwood Mac, playing famous songs like “Landslide” and “Dreams.” Each performance was raw and extremely well performed, but the performance that had the whole audience on the edge of their seats was when they performed the song, “The Chain.” The choir group and lead singer had hyped the crowd up with their energy. They finished the Fleetwood Mac performance off with a strong note to give a strong welcome to the Garage Band winners.

The Garage Band Festival, which is a separate event leading into the MPT festival, had high school and middle school participants. The Garage Band participants were separated into three award categories- singer/songwriters, solo vocalists and band. They bring original music to perform for industry professionals that, in turn, help and give the contestants advice and directions. The top three winners from the Garage Band Festival each got 10 hours of studio time at the college and the chance to perform at this year’s Music Performance Technology Festival.

CCC Vocal Music Director Kathleen Hollingsworth said, “The Music Performance Technology Festival gives our students the chance to learn from successful artists as well as showcase their own talents.”

The music instructor smiled as she explained her music career. “I’ve been singing as a kid, I’ve been singing in church and in school since forever. Started to go to college, started playing in bands, started writing music, I’ve just been doing it my whole life.”

Students and bandmates Toria Beck and Kandra Tolvstad explained their gratitude of the MPT festival and the opportunities that Clackamas Community College had given them.

“For me personally, my brother was doing music at the college,” Beck said. “I was kind of starting a rock band with my best friend, we didn’t really know what we were doing and we decided that we wanted to start recording music, and we were like ‘oh god how do we do this!’”

“We started at home and then did a bunch of crappy recordings and tried a bunch of stuff with [program] GarageBand wasn’t working so we were like okay, there’s a recording class at the school so let’s try that! So we started taking the recording classes and then I kinda got roped into the rest of the program and I’m super glad I did,” Beck said.

“We just released an EP, released a music video, and we are going to perform at Pride Fest and perform in Seattle this year,” Tolvstad said. “We are also planning on releasing two other EPs this year. I think us being here has really allowed us to grow as artists and come out of our shells because we are both really shy.”

Hollingsworth plans on continuing the MPT Festival in the future. “I also created the degree, it’s a two year degree, because we have a recording studio here and we have a music tech certificate, like a one year certificate so when I got here I saw all these kids taking music classes and tech classes but they also played music, they played instruments, but they weren’t working on those skills and I just saw a resource. I was like, ‘we need to put this together to make a two year degree.’ The degree was built upon that and then I was like, ‘we need to build a festival’ and that’s how it all came to be.”