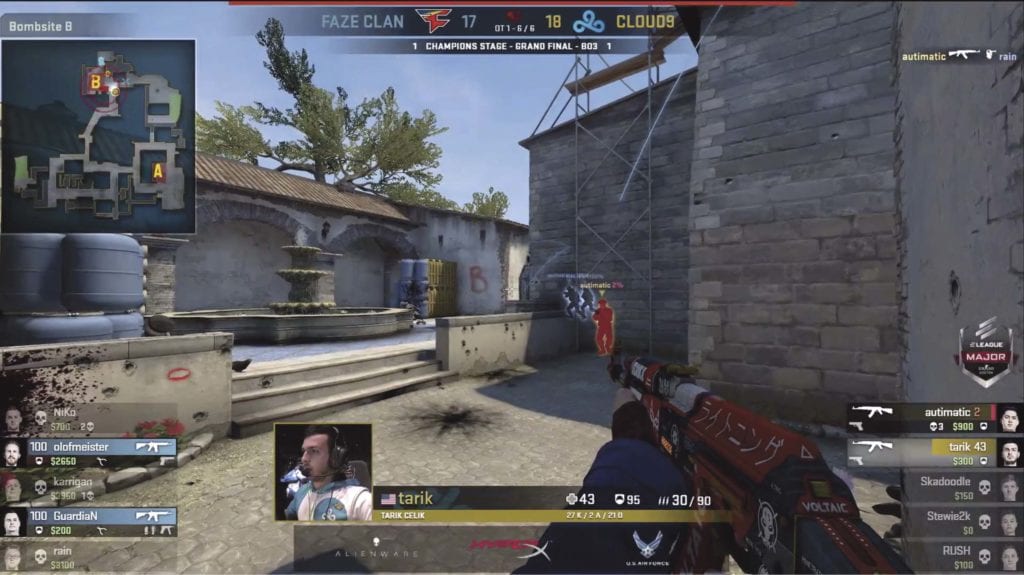 North America has finally won a Counter -Strike: Global Offensive major, and it will likely change the way we look at esports in this country.

CS is played on two sides, the Terrorists (Ts) and the Counter Terrorists (CTs) in a best-of 30-round match. Each team gets a chance to be both the CTs and the Ts, switching sides after 15 rounds. The first to 16 rounds wins the game and if both teams reach 15, then the teams face off in a best-of-six overtime and this continues until one team beats the other.

In CS, a “Major” is the biggest tournament of the year sponsored by the game’s creator, Valve, and includes a $1 million prize pool. It is the pinnacle of competitive CS and what teams prepare for all season.

It began with 24 teams from regions all over the world vying for one of the eight “Legend” spots in the finals in Boston. After a long two week battle, eight teams remained including America’s last hope, Cloud9. After a 0-2 start to the tourney and their backs against the wall, they went on to win three straight matches to qualify for the final eight and would set them up for arguably the greatest run in CS history.

Their first match came against the French powerhouse G2 esports who at the time were the No. 4 team in the world and were at that point in the tournament favored to win seeing as how they went 3-0 in the previous stage. However, C9 shocked everyone and rolled over them 16-8 on C9’s map pick, Mirage and then 16-7 on G2’s pick, Overpass. The French just never got comfortable and struggled to get rolling against C9, who had a big showing from Tarik “Tarik” Celik.

“We had a good game plan going into [it] but on top of that, we were very confident, and we came out swinging,” said Celik, Cloud9’s in-game leader during a post-game interview by ELEAGUE.

C9 would eventually go on to play SK Gaming, the current No. 1 team in the world who, unfortunately due to tournament roster lock rules, were without their fifth man on the roster and played with a stand-in.

C9 plowed through SK on the first map, 16-3 but SK would eventually recover and regain form on Cobblestone to win 16-8. The final map of the matchup took the teams to Inferno. C9 came out hot starting the half 12-3 and putting them in a good position to advance again. It was clear that SK were on low fuel seeing as how none of the players had a positive rating which let Celik and C9 finish the second half with a 16-9 score line. After the match, a frenzy of controversy came storming on Valve for making SK play two matches in one day after SK’s captain Gabriel “Fallen” Toledo expressed his displeasure on twitter.

“Nothing to do with the defeat, but please stop putting one quarters [on] Saturday with semis,” Toledo said on Twitter.

C9 would go on to make it to their first major finals in organization history. On the other side, the second best team in the world, FaZe Clan, eased past their opponents 2-0 in both matchups.

This set up one of the most memorable David and Goliath matches in CS history since North America’s Team Liquid faced SK in the Electronics Sports League One Cologne 2016 Major in which SK won 2-0.

With the crowd on their side, C9 stormed into Agganis Arena with determination to show what kind of squad they are. The first map, Mirage, was C9’s pick and its strongest map. The half ended with a 9-6 score line in favor of C9. They looked prime to take the first map but fell short after a stellar performance by FaZe’s Veteran Ladislav “Guardian” Kovacs who proved to be a thorn in the side of C9 during the finals. The final score came to a 16-14 finish prompting everyone to believe that it was C9’s death notice being that the next map was FaZe’s best, Overpass.

C9 came out swinging, dominating the first half 12-3. They would win 16-10 with strong performances once again by Celik and Veteran Tyler “Skadoodle” Latham. This shocking upset made it seem possible for C9 to win.

Map three would begin on Inferno. Their momentum and the crowd’s support gave them the edge on the final map, but after the first half, C9 held only an 8-7 lead. FaZe regained momentum to reach map and tournament point 15-11. With all hope seemingly to have disappeared for C9, they never gave in. C9 tied the game at 15 after an amazing clutch play by C9’s Jake “Stewie2k” Yip propelling the grand finals into overtime.

The first overtime ended 18-18 bringing us to the first ever double overtime major final in competitive history. From there, it was game, set and match. FaZe lost all its steam trying to keep up with the crowd and finally Kovacs fell at the hands of Latham, Veteran versus Veteran, giving NA its first major in CS history.

“I’m not crying, you’re crying,” a teary eyed Latham jokingly said on his first ever major title in the post-game interview by ELEAGUE. Latham would go on to win finals MVP for his stellar performance.

The drought is over for NA. There are more to come now that the region has something to show for their CS players. Give it five years and these players you’ve never heard of are going to be the ones on kids’ walls, the ones that will be called the best in the world, the ones getting Gatorade sponsorships, playing in front of sold-out arenas on a nightly basis, and you’ll finally see the talent that would have never been exposed without the inspiration of this title.