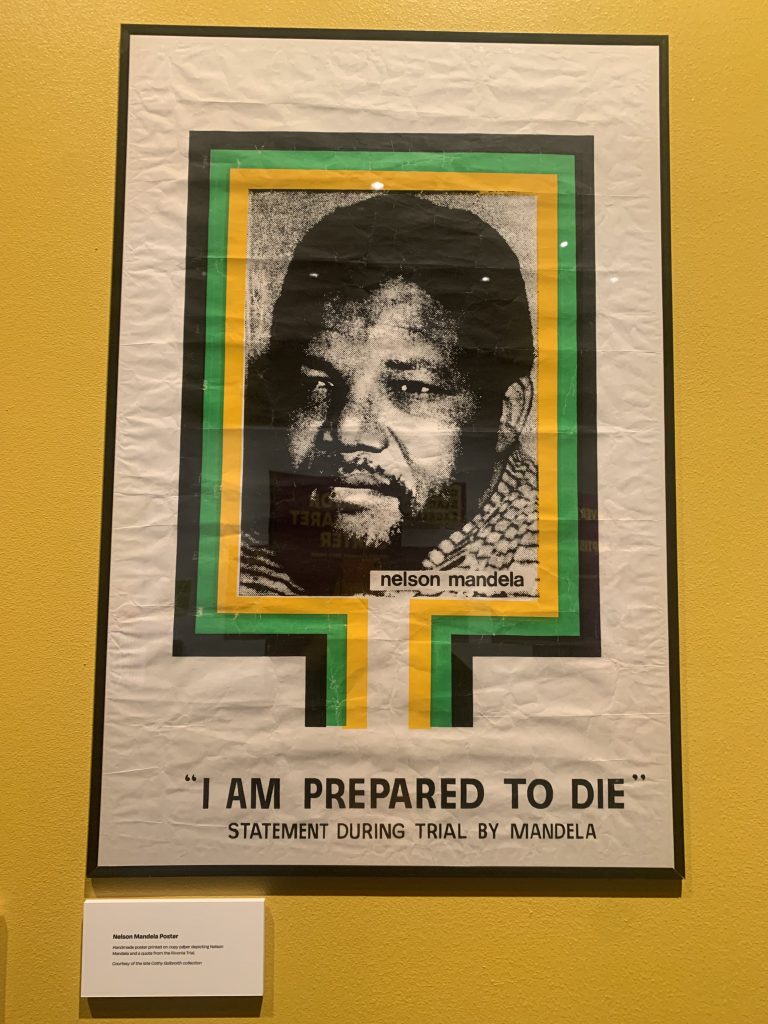 Mandela is the subject of an OMSI exhibit now through Feb. 13; reservations are required.

Going to OMSI in the early morning, there were not many people getting checked in. An employee told us that there would be a short video to watch and two parts of the exhibit, downstairs and upstairs, which to me seemed pretty cool.

I learned about Mandela in middle school and some of high school, however, now I was basically going to walk through his whole life. The video went over who he was and what he stood for, it also showed some of the celebrities he has met like Michael Jackson, Michelle Obama, Oprah Winfrey and many other famous figures.

In this exhibit it talked about his home village, Mvezo in South Africa. How he got the name “Nelson,” which was from a primary school teacher who gave all the kids “Christian” names. Later it seemed to stick with him. What surprised me the most was that Mandela was a rebel. He was expelled from University of Fort Hare halfway through his term when he participated in a demonstration.

One of his good friends was also expelled as well. They seemed to do everything together by reading about their friendship, it reminded me of my own friend. The first half of the exhibit talked about his cultural traditions about how he went from boy to manhood in Thembu tradition, where they lived in isolation for two months. The Mandela exhibit also showed the types of instruments used to play music. It was a look into Mandela home and culture and it was and still is a beautiful one.

Over the years Mandela was not afraid to talk about his beliefs with anyone; he was someone who wanted to fight for all, it didn’t matter who you were, black or white. However, because he opposed South Africa’s apartheid laws, he was arrested for treason. The African National Congress in 1955  formed a blueprint for equal rights and justice in South Africa, this was called the Freedom Charter. It just showed how determined they were to get equal rights for everyone, just like how MLK worked hard to get equal rights for African Americans. It took 18 months to get Mandela and 156 other Congress leaders facing treason charges. However, after they were all acquitted, Mandela was now a fugitive. He therefore tried to leave the country but was arrested in 1962 and sent to Robben Island Prison.

The exnihit showed what he wore and what he slept with. How he was forced into labor, where he took his showers. The blanket in turn looked very uncomfortable, strachy, and didn’t look like it kept you warm at night. Imaging myself in the small cell made my skin crawl. Especially since he had no bed to sleep in and the conditions at the prison were terrible.

But that didn’t stop him from writing letters and working hard for his education. It showed “copies” of letters he would send to his friends and family. These “copies” he wrote all by hand, over and over again. Mandela was in prison for 27 years. Even though he was locked up he was a known man around the world. After he was released in 1990 he contented to fight for equal rights for everyone’s. He was given the  Nobel Peace Prize and was a known noble figure around the world.

The Mandela exhibit took me almost three hours to complete. There was so much to read that I got lost in it all and took in as much as I could. This exhibit was by far the best in my own opinion. Towards the end they had a box you could put a piece of paper that you could write on. It said to write about what you would do to help your community. I wrote about volunteering at food boxes and helping the homeless.

Alexis Sear is starting her first term at Clackamas Community College. In her free time, Alexis enjoys reading and playing games such as Call of Duty, and Rust. After graduating high school in 2021, Alexis is starting at a public school for the first time in her educational career.