Plunking time in the theater pit

Since I’ve arrived in college, I’ve acted in five plays and played in two orchestra pits. As a guitarist, I
love the opportunity to play in an orchestra, as the guitar is not an orchestral instrument.

The show “Once On This Island” at Clackamas High School showed Nov. 6 through Nov. 14 and was my last musical occupation. This time around I played the bass guitar. It’s a switch up from the norm, as the guitar and the bass read in different clefs. Still, as a college player, I felt comfortable to sit and sight read the part at the first dress.

The experience of being in an orchestra pit is very distinct from being on stage as an actor. An actor usually has more time to rehearse and rightfully so. There’s lines to be learned, scenes to be blocked and emotions to explore. Theater techs usually have extra time over musicians too: sets need to be designed and built, sound and lights cued. Orchestra players will meet before the
dress rehearsals for a weekly rehearsal only once or twice before dress. There’s a technical demand to be able to pick up a score and play it well from the first time you ever see it.

Musicals pose additional challenges to even the seasoned musician. Musicals often are in what’s called “mixed meter,” that is, different time signatures all back to back. This kind of songwriting is usually a byproduct of what’s called “recitative.” Recitative is an Italian word from opera that describes dialogue that is sung. This kind of sung dialogue often has strange musical side effects that are challenging for orchestra players. For some great examples of recitative, listen again to the widely known “Les Misérables” and notice all the sung dialogue that doesn’t fall into a normal musical structure. “Into the Woods” by Steven Sondheim is another great musical with plenty of sung speech.

In “Once On this Island,” I encountered plenty of recitative, as well as lots of fast tempos and hard time structures. As a player, the direction and skill of the conductor are very helpful in getting through these passages. Directors’ cues guide us orchestra members through vamps, holds and pauses where we can’t hear or see the stage action. A good director even notices if you’re off, and corrects you accordingly.

Playing music is an amazing joy, and whenever the opportunity comes to do it as a job I always jump at it immediately. Musicals are an awesome way for musicians to branch out. Even if you’re not a musician, I recommend you go see one soon.
The scope of talent from actors to musicians to techs is unbelievable, and you won’t regret it. 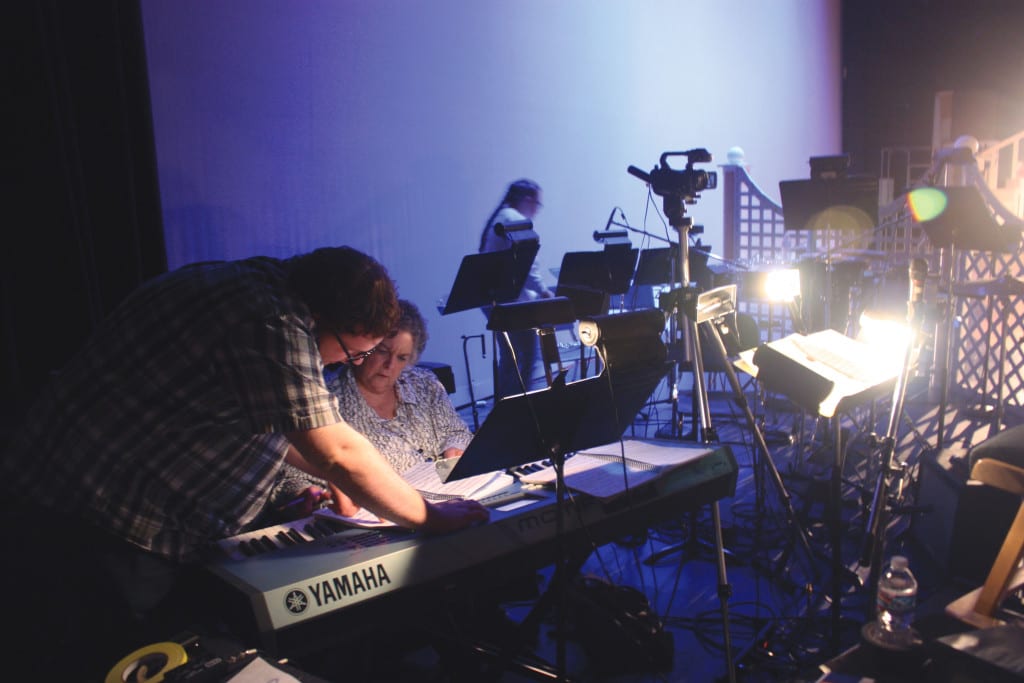 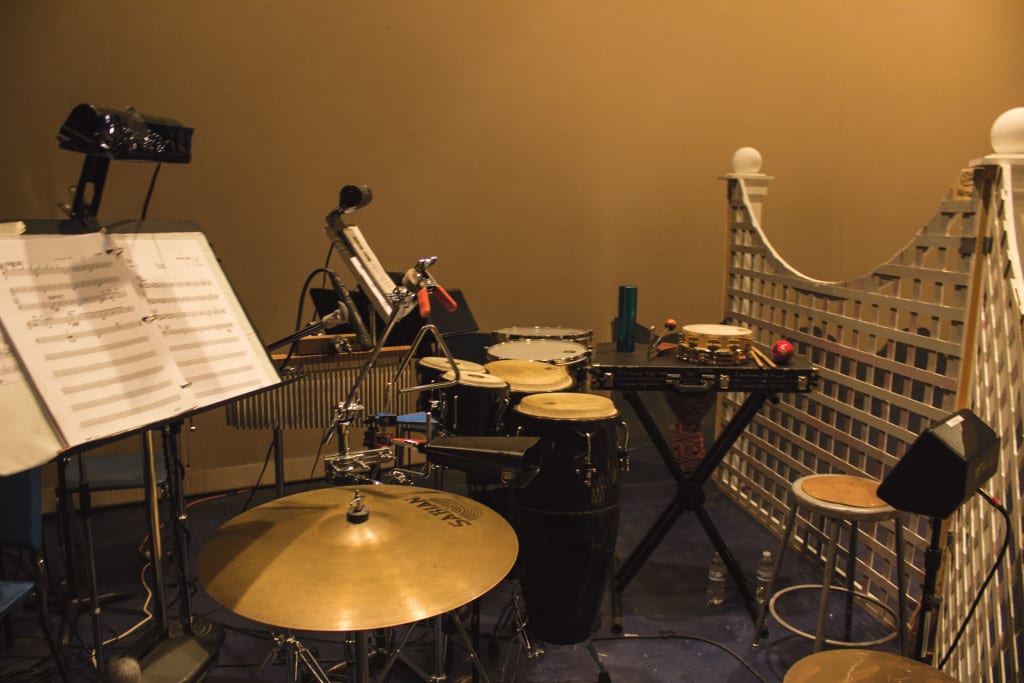 A view of the percussion section. Afro-Caribbean rhythms were featured in this show. 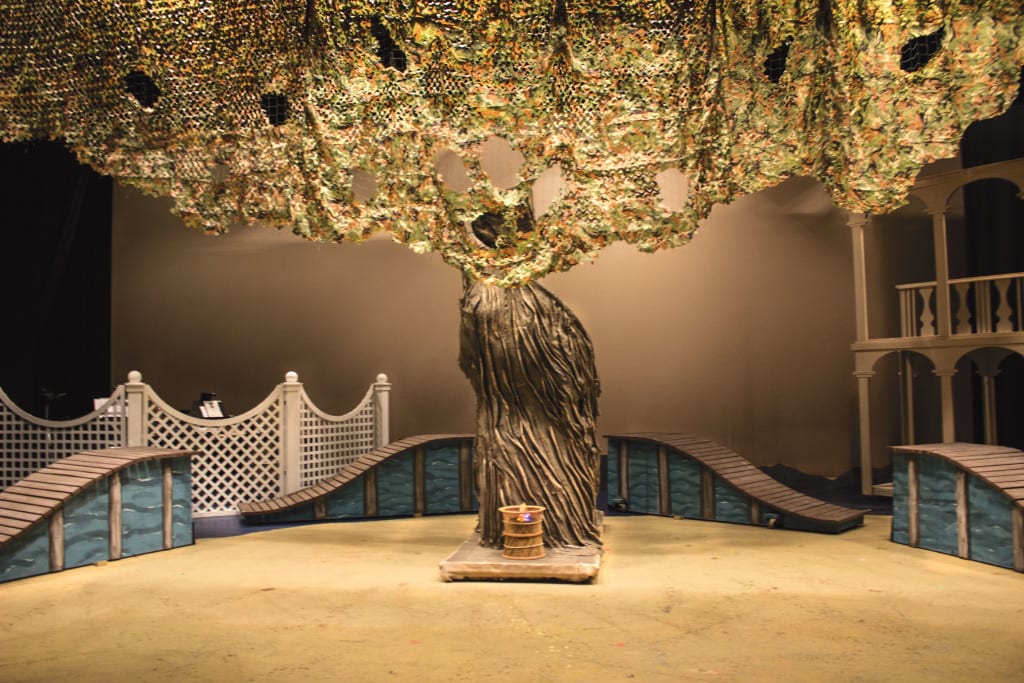 The set for Once on This Island. The pit is behind the trellis. 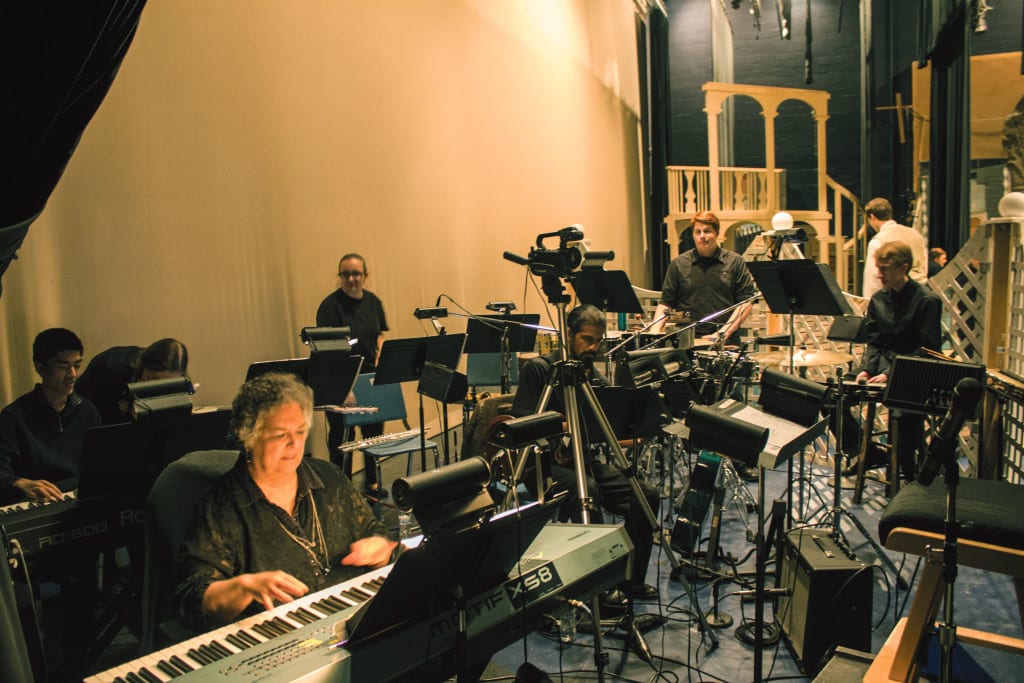 The orchestra pit for Once On this Island.