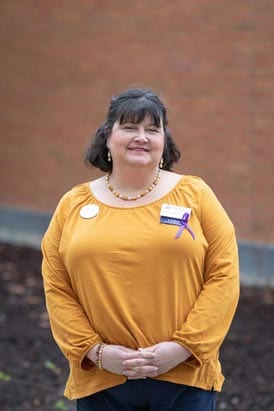 Yvonne Smith is a human services and gerontology instructor at Clackamas Community College.  She has been here for 19 years and has a master’s in social work, bachelor’s in psychology, along with a minor in women’s studies from the University of Oregon. She also serves on the Executive Council for AARP.

TCP: How did you get to Clackamas?

SMITH: I worked in research for several years and then went back to get my master’s in social work. After I had my master’s, I worked mostly in medical, social work. I did home health for a while and then I worked for Willamette Falls hospice for about seven to nine years. While I worked for Willamette Falls hospital, I also taught stop smoking classes and stress management classes. A co-worker said, you know, my friend at Clackamas is really desperate for somebody to teach the classes, somebody quit at the last minute. And so I just jumped in. I was adjunct faculty for about five years in psychology and in human services, and then I got a full-time job here working in the early college programs, and I was the director of Gateway to College and the director on campus for Clackamas Middle College. When those programs got absorbed into some other programs, I ended up in the Education and human services Department.

TCP: What do you teach?

SMITH: The human services degree at Clackamas is called a generalist degree. What that means is that when you graduate, you’ll have pretty much all the basic skills you’ll need to work with people in lots of different settings, and also kind of any age range. And so, intentionally, there’s a lot of electives in the degree. Students walk and use those electives either to explore different ideas about what they want to do, or if they already know what they want to do or who they want to work with, then they’ll use that to specialize.

TCP: What is human services?

SMITH: Human services encompasses pretty much anything that involves helping people. All kinds of social services also can include some things like probation and parole. And in terms of the degree program, at the associate level it’s called human services; at the bachelor’s and master’s level, it’s usually aligned with social work.

TCP: What got you into human services?

SMITH: I worked in research at OHSU and I knew that I probably wasn’t going to be able to go any farther without a master’s degree at least. Then my mom was diagnosed as terminally ill. I ended up moving back home to help take care of her. She was on hospice, and it was the first time I ever met a social worker. I kind of thought, you know what, that looks like something that would be really interesting to do. I kind of put it in my back pocket, and then later on decided to apply to social work, school, in order to do hospice.

TCP: Did the experience in hospice make you interested in wanting to pursue gerontology?

TCP: Has there been an increase in students interested in social work here at CCC?

SMITH: One of the things that’s great about that career is there’s always a need. And so, the program has been pretty steady. During the recession we did have kind of an increase, but we haven’t had a decrease. One of the things that’s changed is a lot of students now are really looking towards transferring rather than going right out into the field. But one of the most recent changes is that in 2019 the State of Oregon changed the rulings for case managers for DHS. Before they had to have a bachelor’s degree, but they’re in such need of employees that they changed it to an associate degree. So now, students can graduate with an associate degree and get a pretty good living wage job right off the bat.

TCP: How do you stay mentally healthy if you’re dealing with trauma and heart issues a lot?

SMITH: Part of what we teach in the program is really good self-care. So you really have to intentionally engage in activities to take care of yourself. The other thing we talk about is having really good boundaries around your work, because those two things are going to keep you from burning out, and burnout is a huge problem in social services.

TCP: If you were a student here, and you were interested in social work or gerontology, where do you tell the students to start with a class or sitting down with somebody?

SMITH: If somebody is interested in either working with people or learning about people, oftentimes those students will identify as psychology students, but I usually recommend that they take Intro to human services, which is a great one because it goes over the history of the field and what’s involved in it. There’s a couple of criminal justice classes that are really good for people to take too, one of them is in intimate partner violence. We also have a class on human trafficking. Sometimes I end up getting students in human services who actually were criminal justice students who realize that they actually don’t want to be police officers they want to work with the same issues that address it from a different point of view.

TCP: What do you say is the most rewarding thing about being a therapist?

SMITH: Probably watching the light bulb go on working with people and seeing them all of a sudden go “Oh. Hey.” and get some insight. So for me it’s not about what I do, but about helping people understand themselves better.