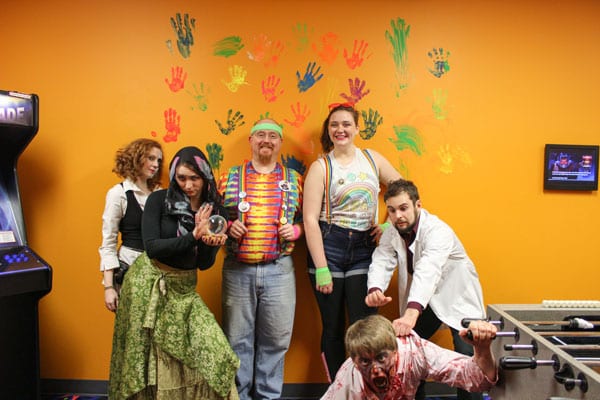 It might sound like a nightmare to be locked in a room with only minutes to escape, but that’s exactly the thrill that people around the country are seeking when they visit escape rooms.

Escape rooms allow people to become the game pieces in a life-sized adventure. Rooms vary in theme, but the general idea is that a group has 60 minutes to observe, explore, decode, open locks and solve puzzles in order to break free.

Members of The Print staff visited “Madame Neptune’s Voodoo Curse” at Portland Escape Rooms on Beaverton-Hillsdale Highway, where we were locked in a room together with the task of breaking a curse to save our souls.

“Your team gets to be the protagonist of your own horror story,” said Lena Stepp, general manager and designer of the room.

Madame Neptune’s granddaughter led us into a small room with skull wallpaper. She sat at a large table to reveal the fortune of one brave group member. After a few instructions to help immerse us into the story, she was off, and she locked the door behind her.

We managed our way into a larger, dimly lit space with shrunken heads for wall décor, where most of the puzzle-solving happened. We eventually met another character and encountered the underworld, which was dark and required us to use the provided lanterns. We watched the clock tick down as we worked together to break open lock after lock, and after a fright or two and plenty of confusion, we made it out at 56:05 with minutes to spare.

According to Stepp, approximately 30 percent of groups escape Voodoo Curse. The record for the room is 37:42.

The Voodoo room is the first fully active room of their own design and their first multiple escape room.

“You have to proceed through a couple different spaces,” Stepp said.

Portland Escape Rooms began almost two years ago in a basement, and has expanded so that they now have 20 employees and offer five different escape rooms, with a sixth coming soon.

“I think over time we’re starting to feel a lot more like a theater company family, because we all love working together,” said actor Lane Heinz.

Stepp suggested that what sets Portland Escape Rooms apart from others is that they have actors and characters in the room.

“It really helps with the suspension of disbelief,” said Nick Hamilton, an actor at the company.

At Portland Escape Rooms, each room is given a scare factor, age appropriateness suggestion and a recommended number of participants.

“Voodoo Curse” has a scare factor of 4/10, is appropriate for ages 15 and up, and 2-6 participants are recommended. That participant number can be stretched by two to accommodate groups. We took seven people into the Voodoo room.

For those really looking for a fright, in the “Kidnapped” room, participants begin handcuffed to a wall in the dark. This room has a scare factor of 5/10.

When Demi Lovato visited Portland Escape Rooms with her dog Batman, she played “Trapped in a Room with a Zombie,” which has a scare factor of 7/10.

Employee Mary Compton suggested that the prime number of people for success is 6-8.

“It depends on the communication of the group,” Compton said. “I’ve seen groups of 12 do phenomenally because they communicate really well.”

“We’ve had interviews too where it’s a boss interviewing their prospective clients, and this is their interview process,” Compton said.

At Portland Escape Rooms, the team creates new rooms approximately every six months in order to keep it interesting for players. They hope to open their newest room, “Steampunk Airship” by May. This room will function like a choose your own adventure.

“It’s not going to just be how well you solve puzzles and how well you move forward through those puzzles,” said Heinz, “but it’s also going to be based on the fact that you are going to become, as your group, part of the crew of this ship.”

For reservations or for more information, visit portlandescaperooms.com.

The Print staff received free game play in order to write this piece.