Really Feckin’ Good – The Cripple of Inishmaan opens at CCC 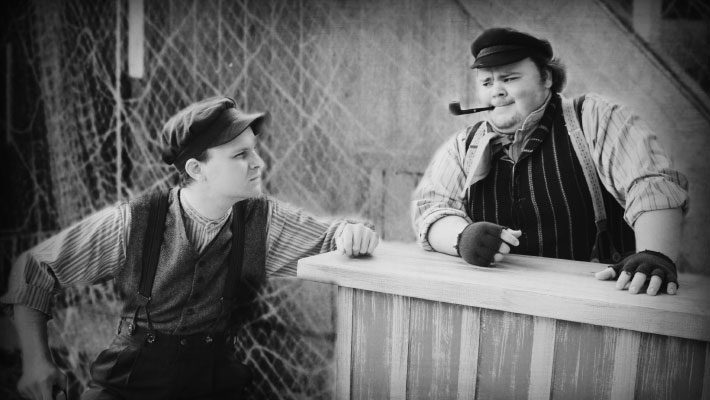 Before we start, yes, there are Irish accents. The Cripple of Inishmaan by Martin McDonagh is the latest production being put on by the Clackamas Community College  theater department. It features a small, diverse cast filled with CCC students and community members. Directed by James Eikrem, the play  takes place in Inishmaan, Ireland, a 200-person island community off the Western Coast of Ireland, set in 1934.

Oregon is an awfully long way away from Ireland, and more specifically Inishmaan, so why is CCC putting on an Irish play?

“I was part of the study abroad group to Ireland in December and I knew that was happening, so at the beginning of the year when we were selecting our plays, I wanted to bring an Irish play to school,” said Eikrem. “I wanted to capitalize on some of the things I learned when I was in Ireland, and have an appeal to the students.”

If the idea of seeing a play based off a remote island off Ireland isn’t interesting enough, the plot is compelling too. The play follows “Cripple” Billy Claven, (it should be noted that he doesn’t like being called a cripple,) a handicapped orphan who lives with his two adopted aunts. While conditions aren’t bad on the island, Billy is tempted to leave the island by the arrival of a film crew on the nearby island of Inishmore, in hopes that he can break free from his life in Inishmaan, and make it big in Hollywood.

Little happens on the island in terms of news, but there is no shortage of interesting characters that hop in and out of the scenes, such as the town gossip, Johnnypateenmike, and the violent fisherman, Babbybobby Bennett. The depressing setting is balanced out by dark-comedy and well done accents.

Color plays a substantial role in the theme of the play. With the costume and set design displaying Great Depression era simplicity. The main set piece is a rotating platform which changes between scenes, serving as a shop, bedroom, church and more.

Something I noticed immediately is how versatile the lighting design is in connection to the set. The lighting design can be used for soft, era-accurate lighting with lamps in the shop and easily change to more somber color variations for different scenes, such as by the boat. However, by far the most significant role in illuminating the play falls to the characters.

Billy’s character added a breath of personality to the show, especially in his portrayal by Aaron Palumbo. With Billy, there’s always this growing sympathy throughout his scenes, and the audience is made to feel bad for him, as much as he doesn’t want you to.

When Palumbo’s character is active on stage, other characters match the tone he sets, or start outside conversations, making you forget that Billy is even there. Being called “Cripple” Billy, it’s unsuprising to learn that his disability is a significant part of his character. Billy struggles to walk, “shuffling” as his neighbors call it, and chooses to read books and to stare at cows in his free time. Compared to the other characters in this play, he’s not substantially emotional or excitable, but rather is calm, collected and equipped with a dry sense of humor.

Another character that stands out is Helen McCormick, who is characterized best by her flagrant use of the word “feckin.” She is portrayed by Karissa Walterman. Helen is a feisty, fierce woman, with her personal mantra being the words, “If I’m not to be taken advantage of, I have to be so violent.” She is a bully, condescending, and also the person Billy continues to pine after, almost masochistically.

Walterman’s portrayal of her fantastically displays the way Helen puts up a strong wall around herself, leaving no vulnerable moments. The character is so well acted, it feels like at any moment she could point and begin to harass someone in the audience. This sounds like a problem, but it only makes her character feel stronger.

One thing to note about this show is the unique perspective on its portrayal of Irish people, where it’s almost stereotypical, but is yet again balanced by dark humor. “There are a lot of things that come out of these people’s mouths, the way they behave to each other, that are kind of like explosions of Irish stereotypes, even though they themselves are kind of in a mold of Irish characters that we would recognize,” Eikrem said.

An example of this is a line you hear multiple times throughout the show is “Ireland mustn’t be a bad place if …” followed by a suffix such as “if German people live here,” which is used as a justification of the current living situation. If you’re in tune to this culture, it opens up another level of understanding, but it is by no means required.

Lisa Marvier who portrays Aunt Eileen said, “I’ve never done theater anywhere. So this is the first time for me.I love it. I’m 54 and I’m hanging out with these kids. It’s so fun.”

Talulabel Gilpin, who portrayed Aunt Kate, said the Clackamas program is welcoming for newcomers. “I feel like Jim [Eikrem] helps you grow as an actor,” she said.

Unsurprisingly, Eikrem agrees with the belief in the connective power of CCC theater. Eikrem said, “That’s part of our mission. We’re, you know, a community college. We see a wide range of students here. We see mostly younger people come into school, many of them for the first time, but then we also see a lot of people who are returning, and they may already be professionals.”If that has convinced you to get involved with CCC theater, auditions for Spring Awakening are on March 2, with time slots that range throughout the day.

In the meantime, go out and see The Cripple of Inishmaan, which will be running from Feb. 27 through March 8, Thursday-Saturday at 7:30 p.m, and a Sunday matinee at 2:30.