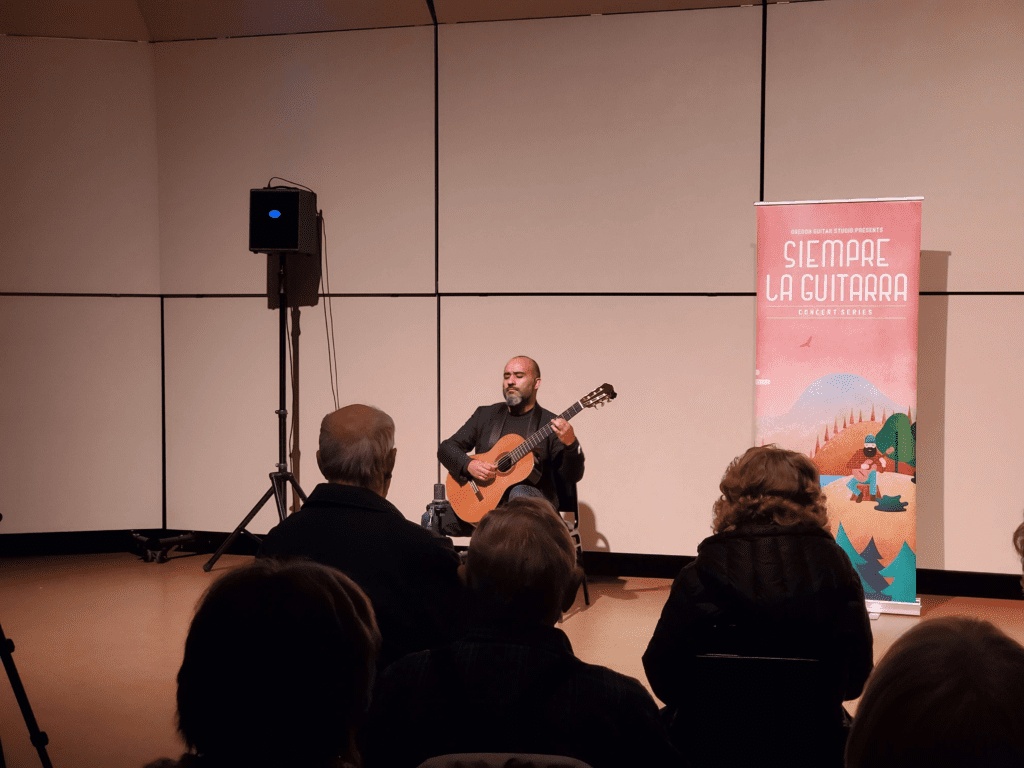 On January 17 students and faculty were visited by international concert guitarist Francisco Salazar, thanks to David Tutmark and the Oregon Guitar Society. Focusing primarily on traditional Chilean guitar, Salazar showcased skills to a small and inviting audience in Niemeyer’s Music Room.

The Portland Guitar Society is a non-profit organization that meets monthly in Portland for open-mic nights; their two-hour meetings are free to the public and guitarists of all skills and styles are invited to attend.

Marking the second concert of it’s second year, Siempre La Guitarra aims to showcase internationally-recognized musicians in a local setting and also to shine a light on other talented guitarists in the northwest. Siempre La Guitarra translates to “Always the guitar” or “Forever the guitar,” and to the musicians involved, that is not a hyperbolic statement; both Salazar and Tutmark have dedicated countless hours towards mastering the guitar and both musicians have traveled the world sharing their music with others.

Salazar was born in San Bernardo, Chile and has been studying the guitar since the age of 18. He attended the Institute of Music of the Catholic University of Chile and has since performed dozens of concerts and festivals in his home country. Jan. 17 was a change of pace for Salazar, as it was his first time visiting America.

As Francisco took to the stage with an acoustic guitar in hand, all members of the audience were silent as could be. It seemed as though the audience were a coiled spring and the only remedy was that first note. Thankfully the wait was not long, and as Salazar struck the initial chord the room was hooked. His left hand moved across the entirety of the fretboard at impossible speeds and with deft precision while his strumming hand plucked each note to life. The most astounding part of his performance was that his eyes remained shut throughout the length of the performance, and he didn’t strum a single sour note.

The Chilean guitarist played through a number of songs, each more complex and impressive than the last; before each a brief background of the story was given. His second song paid homage to Victor Jara, one of the most renowned and influential Chilean composers and a political activist who was killed during the dictatorship of Augusto Pinochet in 1973. Many of Salazar’s songs held that somber tone, and while the sound was beautiful and captivating the shut eyes of Salazar as he performed seemed to hold a lot of sadness.

Each song was met with thunderous applause and smiles were plastered on the faces of many of those that had the privilege of hearing the unique sounds from their cultural source. Many more guitarists are scheduled to play throughout the year, make sure to keep up with the events page so you don’t miss out.