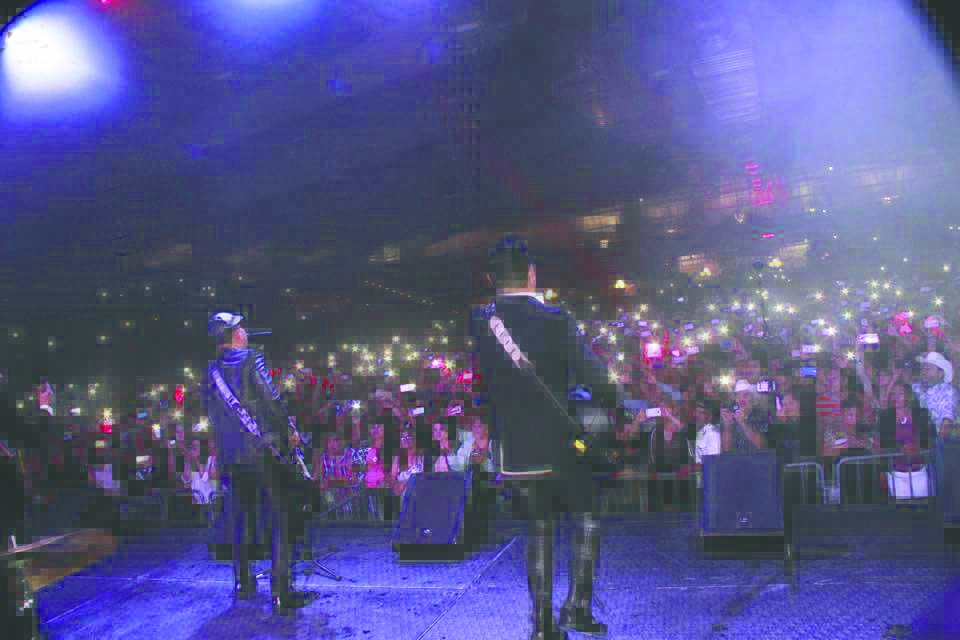 Story and photos by Luis Correa

As Hispanic Heritage Month comes to a close, La Fortuna Entertainment brings three of the biggest names in music from Mexico to Oregon. They brought Jesus Ojeda, Chuy Lizarraga and Los Inquietos. Each of them brings a different style and genre.

While the concert opened with a local band, Jesus Ojeda was the first to step on stage. Known for his exclusively guitar and vocal musical style, each song has a unique sound, based on genres like “norteñas,” “banda” and “corridos.” He opened with his No. 1 hit that took charts last year, “Estilo Italiano.” The charismatic singer wowed the crowd with a solo, playing his guitar with such emotion that the crowd grew energized and danced to the rhythm of his music. Closing his performance, he sang his new single, “No Es Un Juego,” which is more slow-paced for the couples in the crowd and it set the mood for the next singer.

After Ojeda had already pumped up the crowd, next to take the stage was Chuy Lizarraga, otherwise known as, “La cara alegre de la banda.” He brought his fun and fast-paced style of banda music. The crowd cheered with excitement to see him come on stage and sing his beloved song, “La Peinada.” The mass of fans sitting in the stands took to the dance floor in search of partners to dance with, for the night was still young.

Emotion definitely guided the evening’s mood. Lizarraga screaming, “Are you guys tired yet!” and the crowd responding “no!” kept the momentum going into the night. He then closed his performance by singing “Se Me Sigue Notando,” but was overcome when the audience knew all the lyrics to his song and often stopped to smile and point the microphone towards the audience to join him in his performance.

Finally, it was time for the main event. The crowd waiting anxiously, fireworks going off, lights everywhere, smoke coming out of the machine, the long awaited “Psychos del corrido” take the stage while the crowd cheers “Inquietos, Inquietos!” Known for their fast-paced songs about controversial topics and lyrics, Los Inquietos have carved out a niche in the crowded genre of narco corridos. With the audience already fired up, the band started with the song, “La clika acelerada,” that is addressed to the band’s hardcore fans.

By this time the whole audience was on the dance floor dancing the night away. Meanwhile Los Inquietos were putting on a hell of a show. The main singer, Felipe Meza, at one point even pulled out a bottle of Buchanan’s scotch and started chugging it, as well as splashing the crowd. It’s no wonder they are known as “Los psychos del corrido.”

Overall, the kickoff of the Locos y Entumecidos tour was epic. A good balance of the different styles of music that the Hispanic community has grown to love. It was a great tour to bring Hispanic Heritage Month to a close.