Student paints with the colors of the wind

“[I have been] donating a lot just to get my work out there and my name out there. I’ll be having some paintings in a barber shop here pretty soon, and then in a bar,” said Taylor.

Taylor didn’t start college at Clackamas thinking he was going to be an artist. He almost became an electrical engineer, but instead he chose to embrace his hobby of creating paintings and drawings.

“I believe if there’s anything I could get fulfillment out of, it would be art,” said Taylor.

Taylor has been creating paintings and drawings since he was five or six.

“All of my free time I would spend drawing inside or outside, and I was setting up still lifes, not really knowing what the hell I’m doing,” said Taylor.

Taylor’s favorite artist, who is also his art teacher David Andersen, said, “He’s an incredible student. He’s not very loud, he speaks quietly, but when he does, everybody listens. And he’s highly intelligent, so what he says has a lot of impact, especially on critiques.”

Andersen, who has been teaching art classes from beginner to advanced since 1997, is a big fan of Taylor’s.

“I always know that he’s gonna go, he’s gonna take that assignment, think through it, and then go beyond it,” said Andersen.

Taylor described his art as surrealist.

“It’s kind of a depiction of dreams or an interpretation of reality through a dream-like perspective,” said Taylor.

Taylor said he is often inspired to paint what he sees in his own vivid dreams.

“When I start talking about my dreams, people sometimes don’t believe me or maybe they can’t picture what I’m talking about. So when I can transfer that image onto canvas, people can enjoy how absurd this thing was,” said Taylor.

Taylor also mentioned that music can affect his work. He likes listening to Pink Floyd while he paints.

“If I’m playing a certain song, it can have an impact on how the drawing comes out, the style, or even the colors that I use,” said Taylor. Even the sounds of nature can inspire him.

Speaking of the colors that he uses, Taylor said that he has a thing for painting with red.

“When I paint with red, there’s just kind of this emotional attachment I have to it,” said Taylor. He remembers always preferring the red lightsabers in Star Wars when he was younger.

Living things are a favorite of his to paint. “I always had this fascination with the contrast of mechanics and organic forms, so kind of like a robot that’s like part tree and vines and plants and stuff like that or even artificial human beings wand things that come from the imagination,” said Taylor.

Taylor hasn’t just created paintings and drawings. He has painted murals. “I did all of the design paintings in the Johnson Creek Fred Meyers on 82 [Ave.],” said Taylor.

Taylor’s mother, Heather Taylor, remembers feeling very proud when she saw the murals. “I really wanted to just tell everybody who worked there: ‘Hey everybody, when you see that, just so you know, that’s my son who did that,’” said Heather Taylor. 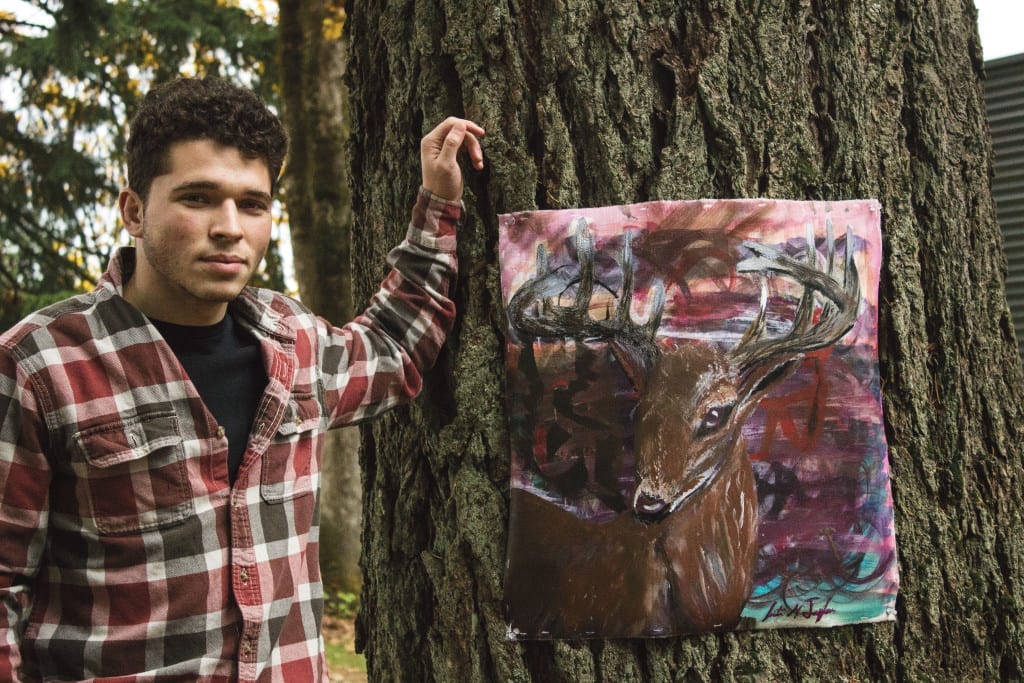