Story and photo by Elizabeth Kessel

No, those are not hordes of zombies 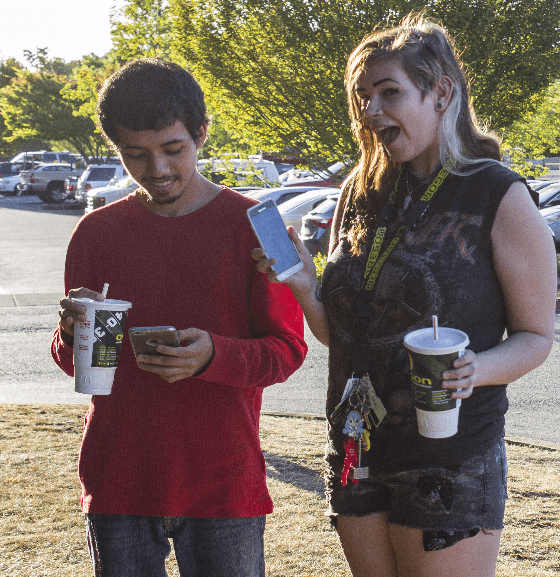 coming your way down the sidewalk. Just walk past them and everything will be fine. They may be shuffling around aimlessly, but they shouldn’t notice you. With approximately 30 PokéStops within walking distance on campus, they’re more likely trying to catch a Pikachu.

Ever since its release in early July, Pokémon Go has taken the world by storm. Downloaded more than 500 million times, it has motivated people to get outside and start walking around. People can walk to PokéStops that are near monuments, artwork or buildings. Two easy PokéStops on campus can be found in front of Roger Rook Hall and Gregory Forum.

Here’s how the app works. At the PokéStops, players can gain more PokéBalls, Great Balls, Razz Berries (which are fed to Pokémon so they can be caught easier), potions and Lucky Eggs. Setting lures is popular among players, too. Lures set at PokéStops attract Pokémon to one spot instead of walking around and possibly not finding one. Lures last for 30 minutes, and anyone near them can benefit.

There are 151 different kinds of Pokémon to find. Some are only available in certain regions and others are completely out of reach unless you have your passport ready. Within the app, once a Pokémon is found, tap on it and fling Poké Balls towards it to catch it. Each Pokémon has different levels of combat power, and the higher they are, the more challenging it is to catch them.

So what do you do when you catch a Pokémon? There are a few options. You can either catch more of the same kind and eventually evolve it, continue to catch all different kinds of Pokémon and show off your collection or even take them to gyms to battle.

What adds more to the excitement is once you hit level five, you can choose one of three teams. The choices are Mystic in blue, Valor in red, and Instinct, which is an electric yellow. I chose blue. Go team Mystic!

Like the teams in Pokémon Go, people can usually be split up into three groups when it comes to feelings about the app.

Group one is the detesters, who ultimately hate it and are sick of hearing about it. There are some legitimate reasons they have for their hate. People have been found trespassing on properties just to catch a Jigglypuff. Lures are being placed on PokéStops on purpose in hopes to rob the people who show up.

Student, Emily McCarthy said, “People have become irresponsible to their surroundings. They’re way too invested when Pokémon Go goes from a fun game into someone might get hurt.

Group two, also known as the apathetic, are those who don’t understand or care much about the game. This is the group who listen to people rave about finding a rare Pokémon and respond with something like, “Get a life.”

Student, Jamie Pierce said, “I’m not that interested in the game. I don’t get what’s so fun about chucking pretend balls at pretend Pokémon.”

She said, “Pokemon Go gives me an opportunity not only to explore new places and incorporate my enjoyment of Pocket Monsters in a public space, but it also encourages me to explore and see spaces I’ve known and grown up with in a new light. It’s also a fantastic ice breaker!”

At the end of the day, Pokémon Go has taken over the lives of people from all ages. And maybe getting outside because of the app isn’t the worst thing. Pokémon Go has created amazing memories for individuals, friends and families.

Now I don’t know about you, but I think I just saw a Dragonite. Gotta catch ‘em all right?