Students take a sleep of faith

It’s 2 p.m., and you’re sitting in class. You were once attentively taking notes, but as your eyelids get heavier, the pen gets slower and the desk in front of you is starting to look like a pillow, until your teacher yells at you to wake up, drool covered and all.

This is the life of a college kid these days. With loaded class work, jobs and if you can dare to manage a social life, there’s a simple truth that college kids these days are simply not getting enough sleep.

My boyfriend considers me “a professional napper.” And while I should probably take that as an insult, I really don’t. My ability to curl up anywhere and doze off has been beneficial on long car rides, in between classes, and even through classes. (In high school, I mastered the ability of waking myself up before my math teacher would change the notes slide, so she could never use the excuse that. ‘Well if you had your notes you would know the material, wouldn’t you?’) I can snooze with ease.

Many people would say, “That can’t be good for your sleep schedule,” but is it really harmful? The National Sleep Foundation says that 85 percent of mammals are polyphasic sleepers, or sleep multiple times throughout the day in short periods, but humans generally don’t.

Have you ever been so cranky that you couldn’t think straight? Did you nap afterwards and feel a million times better? That’s because it’s been proven that a nap of 20 to 30 minutes can improve mood, alertness and performance, according to the NSF.

Now, consider your bedtime. 1 a.m.? 2? Or, if you’re really daring, 3 or 4. If you have to be up around 8 to get to a class, the math is simple: four hours of sleep is not enough; you should be aiming for at least eight hours every night. The University of Georgia polled their students, and found that “1 in 4 UGA students indicate that lack of sleep has impacted their academic performance in a negative way. They have made lower grades, missed a paper or project deadline, or had to withdraw from class.”

For most college students, even getting a normal night’s sleep is nearly impossible, much less squeezing in a mid-day snooze. “I think if I’m willing to not do my homework,” said student Jourdan Mosey, on if she got enough sleep. “Because I’m either working, or I’m doing homework. Between the two of those, then no. But if I’m willing to risk not doing my homework the night before and do it before class to get sleep instead, I could.”

Students Shelby Anderson and Nathan Kugler laughed when they were asked how much sleep they got. “That’s funny,” Anderson said. “It really depends on the day, and if I have class the next morning. It’s usually very minimal, like four to six hours, and that’s usually because I stay up and try to help some other people with their homework.”

Kugler said, “If I have class really early in the morning I probably get about five or six hours.”

And when asked about napping? “No,” said Anderson. “I mean, coffee’s a thing. I could take a nap if I really pushed myself to, but there’s really no time.” 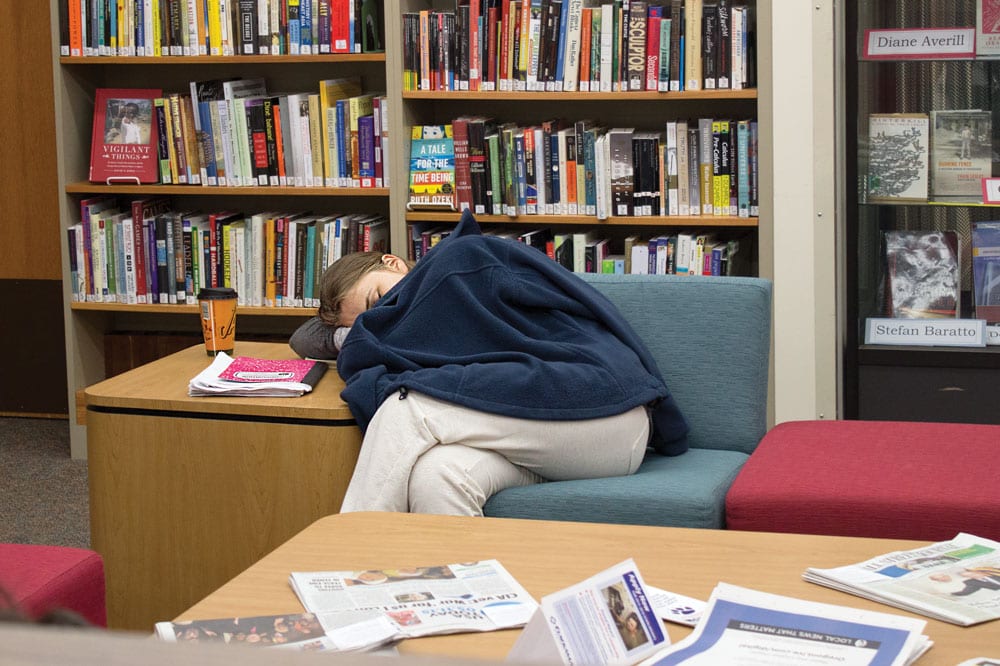 One CCC student catches up on sleep between classes in the library.