The time has come. The last play of the term is just weeks away from opening night. Clackamas Community College students will have the pleasure of experiencing “The Comedy of Errors” by Shakespeare. As students prepare themselves for the performance, let’s take a look backstage and hear from big names related to the production.

Sam Levi, the artist in residence, will be portraying Dromio of Syracuse in the production.

“One of the hardest things [about being in theater] is learning not to be so hard on yourself,” Levi said.

Levi’s job as an artist in residence is a position only offered at CCC. He’s an alumni who used to be in the theater program himself. After he graduated, he found work related to theater and now he works with our theater program.

He said he’s here to “be a bridge between students and the staff and to kinda mentor the other students.”

Levi said that most students, when auditioning, are not looking for a specific role.

“Most people just want to get in the show,” said Levi. “Which is nice, [because] there’s that spirit here of collaboration rather than like ‘I’m here to be the star.’”

Chris Whitten is a CCC instructor, the resident designer and technical director. He oversees the building of the set for the play. To guide him, he uses a little three-dimensional model that he made out of paper. One quarter of an inch on the model represents one foot on the set.

“As people are looking at the set, it’s got a pop-up storybook of a feeling to it,” said Whitten.

Everything seen on the model is created precisely.

Building the set is quite a process. It has been worked on all through this spring term, and it will continue to be worked on until the very last minute.

“Every moment impacts the progression of how we get there,” said Whitten.

Whitten likens building the set from the model to making a jigsaw puzzle.

“You get to build puzzle pieces, to real scale, not to puzzle scale,” said Whitten.

James Eikrem knows how the play runs, and all the facets involved. He is the artistic director for the theater program.

“There are tons of decision making things going on all the time,” said Eikrem.

Eikrem is responsible for casting, staging the play and working with the actors. Being the director is a dizzying job.

“I coordinate everything that you see that goes into the production,” said Eikrem.

The rehearsal schedule is a tedious one. Currently the rehearsals are on Mondays, Wednesdays, and Fridays between 3 p.m. and 6 p.m. Not to mention a four-hour rehearsal on Saturday. Obviously, there is a lot of commitment involved, but Eikrem is excited for the show.

“You will not only see some really, really, engaging performances and fun stuff to laugh at, but it will be a feast for the eyes as well with our costumes and set design and lighting,” said Eikrem.

Levi summed it up with, “The play is pretty much a cartoon on stage and, so if you like seeing people slipping on banana peels, and get bonked on the head with hammers, come see. This is for you.” 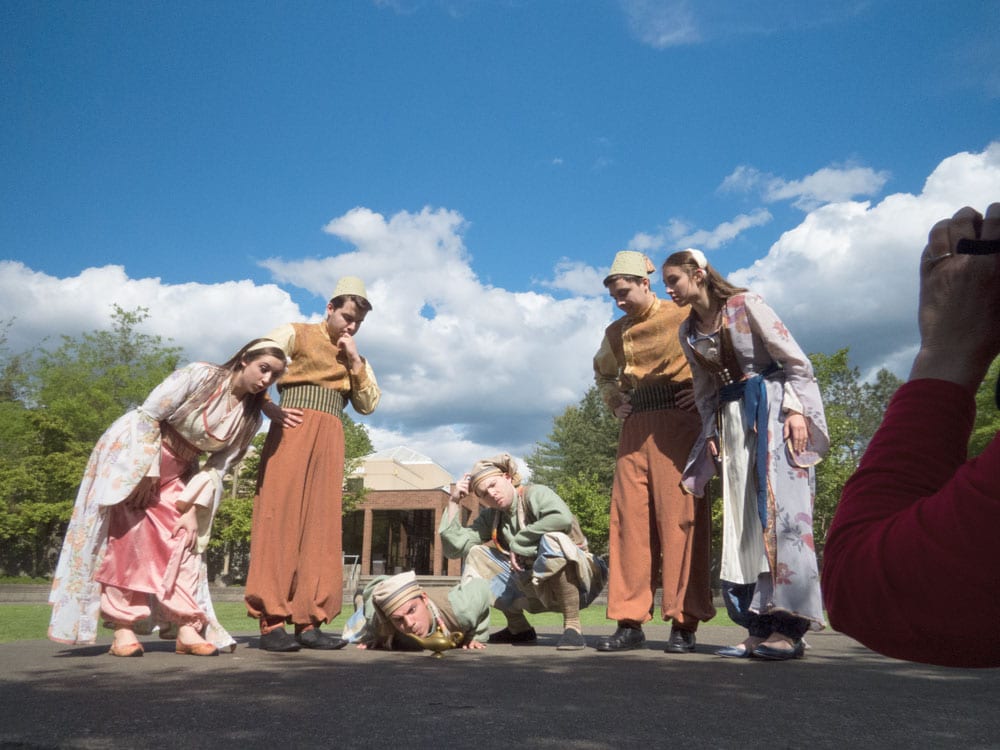 Performers of the “Comedy of Errors” pose for a photoshoot.